Visiting the new home of "Spring Festival Mother": Saying goodbye to the days when "you can't fall asleep when it rains"

China News Service, Liangshan, March 20 (Chen Xuanbin, Tang Yan) "Is your cold better? My father and I are not at home. You must remember to take medicine. How are your younger brothers and sisters today?..." Recently, in Liangshan, Sichuan Province In a Yijia Xinzhai in Taoyuan Village, Wayan Township, Yuexi County, a junior high school student, Wuqilabumo, received a video call from his mother 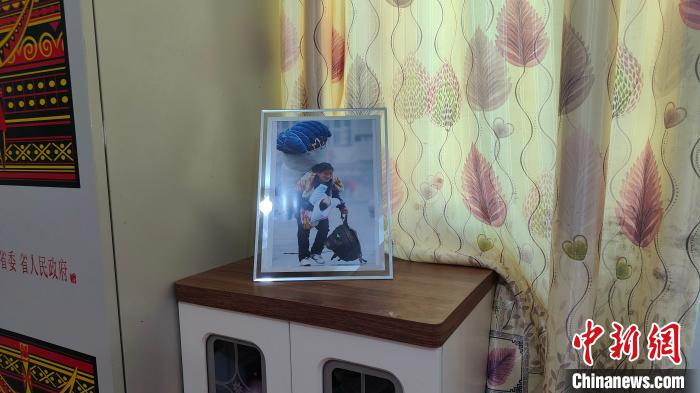 China News Service, Liangshan, March 20 (Chen Xuanbin, Tang Yan) "Is your cold better? My father and I are not at home. You must remember to take medicine. How are your younger brothers and sisters today?..." Recently, in Liangshan, Sichuan Province In a Yijia Xinzhai in Taoyuan Village, Wayan Township, Yuexi County, a junior high school student, Wuqilabumo, received a video call from his mother Bamu Yubumu from Fujian after school.

After talking on the phone, Wuqilabomo came to the desk to teach his sister's homework, while the younger brother sat on the spacious sofa and watched TV.

On the brand-new TV cabinet stands a picture of mother Bamu Yubumu carrying a huge suitcase, carrying a backpack in her left hand, and a baby in her right hand.

This photo taken during the Spring Festival travel season in 2010 has touched countless Chinese people over the past 11 years. Bamu Yubumu is also affectionately called "Mother of Spring Festival Transport."

On the TV cabinet of Bamu Yubumu New Residence, there are photos of "Spring Festival Mother" that touched countless people.

"My mother has always been very ordinary and ordinary in my heart. I didn't expect that she touched so many people." It was not until February this year that Wuqilabomo learned of her mother's story on the news.

After her parents went to work in Fujian, this little girl who looked very much like her mother took on the responsibility of looking after her younger siblings.

Taoyuan Village is built on the hillside with steep terrain.

In the past, there was only a dirt road leading to the outside world. The villagers lived in shabby thatched huts, wooden houses, and adobe houses. They suffered from severe cold in winter and heat in summer.

Nowadays, cement roads lead to households, and beside the village roads are rows of spacious, bright, ventilated and light-filled Yijia new villages with ethnic characteristics.

Before moving into a new house with white walls and grey tiles, the Bamu Yubumu family lived in an adobe house.

When it rains, the old house leaks, and the quilt is often wet.

At that time, it was common for children to catch a cold and fever because they slept on a damp mattress.

Bamu Yubumu, who works in Fujian, is on a video call with her eldest daughter.

"I used to go out to work, and when it rained, I was worried about the children living in the earthen house. Now I have to rest assured when I go out." Recalling the past, Bamu Yubumu on the other end of the phone was a little sad.

In 2018, under the national poverty alleviation policy, the Bamu Yubumu family received a housing subsidy of 40,000 yuan, and then raised 70,000 yuan to build a new home with three bedrooms and one living room, saying goodbye to "you can't sleep when it rains." Days.

What kind of subsidy does Yijia Xinzhai enjoy for poverty alleviation and relocation?

Bamu Yubumu's children are playing in a spacious and bright new home.

In Xinmin Township, 8 kilometers away from Taoyuan Village, the home of Bamu Yubumu's father Bamu Abi is here.

In 2016, Bam Abi built a two-story bungalow with a size of more than 240 square meters. He is also the one who takes care of the children in Bam Yubumu on weekdays.

"The house where my daughter and I lived in the past was broken and crowded. The tiles flew away as soon as the wind blew, and we had to reinforce it every few months." Bamu Abi, who is over half a hundred years old, is now a child and grandchildren. , The only worry is the daughter who works outside.

"I used to have no conditions for my daughter to have a good life, I am very sorry for her, now at least her child doesn't need to be in the rain to sleep."

In February of this year, the news of "the mother of the Spring Festival travel festival" was spread on the Internet. Many people approached Bamu Yubumu and asked her about her changes over the past 11 years.

"I used to spend the New Year in an old house, and my relatives and friends couldn't be squeezed when they came, but now I live in a new house, where I can sit and play."

Bamu Yubumu's children are now taken care of by her parents.

The change of the Bamu Yubumu family originated from the safe housing construction project carried out by Liangshan Prefecture since its poverty alleviation.

The construction of housing safety in Liangshan Prefecture is the epitome of poverty alleviation in the deeply impoverished areas of Sichuan and the realization of safe housing.

According to data provided by the Sichuan Provincial Department of Housing and Urban-Rural Development, as of the end of February 2021, Sichuan has implemented 1.033 million rural dilapidated houses and invested 18.89 billion yuan in subsidies to help poor people realize their dream of living in peace.