Actor and revue prima donna Berit Carlberg is dead. She died suddenly and unexpectedly on Tuesday, confirming close friends of the family for TT. She turned 79 years old. 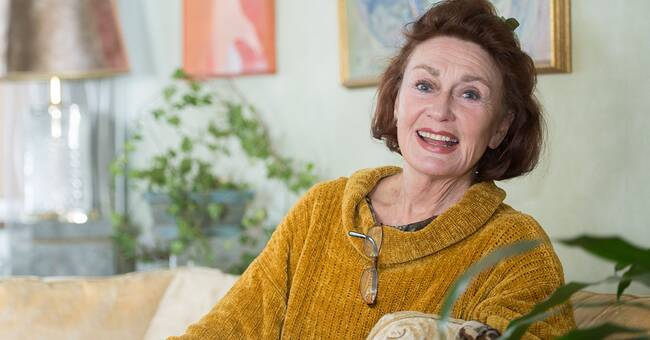 Singer, actress and revue prima donna Berit Carlberg entertained the Swedish people for half a century.

She worked with, among others, Jan Malmsjö, Sven-Bertil Taube, Hagge Geigert and not least Nils Poppe, whose prima donna she was in a number of operettas and farces, including "Spanish Fly" and "White Horse".

She experienced her big breakthrough immediately after the Statens Scenskola in Malmö.

Only 25 years old, Carlberg played the main role as Hanna Glavari in "Glada Änkan" against Jarl Kulle at the Oscar Theater.

It was a sensation and a crowd rush.

"Happy Widow" went seven days a week - for a year and a half.

-It was a sensational breakthrough that she got then, says her friend and opera singer Siv Wennberg, who remembers her friend as a fantastic stage personality, with a beautiful singing voice and a "natural and strong beauty".

Off the stage, however, Berit Carlberg could feel insecurity.

In an interview with TT that she did before her 75th birthday in 2017, she told about the declining self-confidence, which was rooted in the "jante mentality" while growing up in Uddevalla.

No one was allowed to be superior to anyone else.

-All my life I felt: I will show them!

I am incredibly stubborn and have mostly enjoyed it.

I'm not that musical, but I practiced a thousand times more than my peers - and succeeded.

Mia Poppe, who is the daughter of Nils Poppe, talks about the lifelong friendship with Berit Carlberg:

-She started with my father when I was two years old, in 1971 at Fredriksdalsteatern.

She had just had a breakthrough in "Happy Widow" at the Oscar Theater with Jarl Kulle.

Then father calls her and wants her as his prima donna in "The White Horse", and then she participates for 17 summers at Fredrikdalsteatern and is father's prima donna during all years.

Berit Carlberg also becomes a close friend of Mia Poppe thanks to her father's long and fine collaboration with her.

-She is the godmother of one of our sons.

My husband and I participate in the theater she runs in Södertälje, Hebbevillan.

She was a very close friend of ours.

She has also worked at my mother's theater Poppegården in Helsingborg, where we did, among other things, Strindberg's "The Pelican" with great success.

There she also made her last production on stage, it was called "The Art of Shortening Eternity" by Anders Wällhed.

During the pandemic, Mia Poppe, together with her husband and another colleague, did interviews for her own Youtube channel Widén-Strand-Poppe.

-I have done a long interview with "Bibi" which will be broadcast on Saturday.

It's already done, the strangest thing of all is that she was at our house last Monday to watch it.

She was very happy and happy for the interview and thought it would be fun to watch it.