Rhinoneumonitis, the 'covid' of horses that has paralyzed European equestrianism

The European equestrian is in suspense due to the outbreak of a virus that, as has happened with Covid-19 in humans, has forced horses to be confined, limit their mobility and suspend ... 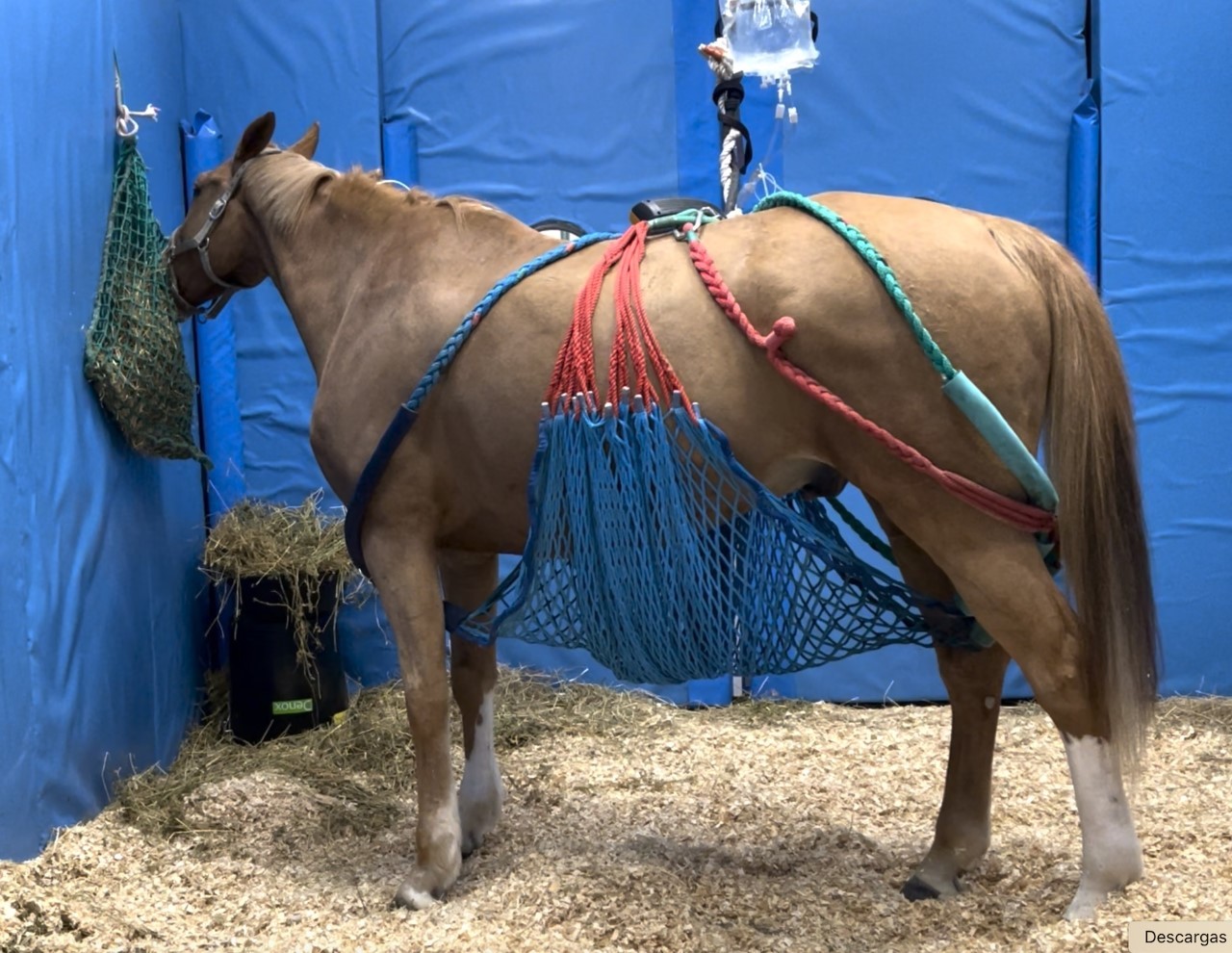 The European equestrian is in suspense due to the outbreak of a virus that, as has happened with the Covid-19 in humans, has forced to confine horses, limit their mobility and suspend all competitions, in Spain and in other European countries.

It is, however, a well-known herpesvirus that causes rhinopneumonitis (EHV-1), a disease in horses that is easily transmitted by aerosols and

can cause serious neurological damage.

Although there is a vaccine, the new strain detected is being especially aggressive.

The origin of this outbreak is in Valencia, specifically in the Godella Jumping School Center (CES), during an international contest held on February 21.

Since then, the infections have multiplied and only in the Valencian Community are there three more affected facilities.

Eighty-four horses have fallen ill and are being treated at CES by 21 veterinarians with an unprecedented device, while a score more, in serious condition, have been transferred to external clinics.

The deaths are close to ten.

in their stables and subjected to continuous medical surveillance.

The Generalitat Valenciana has also suspended the use of the equine movement card and the Equine Identification Document (DIE) as substitutes for the transfer health certificate, and it is recommended that the animals remain in their stables in the face of the most virulent outbreak of the last decade which, in addition,

is affecting competition horses with a high economic value.

The rhinopneumonitis has also reached the Congress of Deputies, where Vox has requested the appearance of the Minister of Agriculture, Fisheries and Food, Luis Planas.

As Isabel Simarro, Professor of Animal Health and former Head of the Microbiology and Parasitology Service of the Hospital Clínico Veterinario of the Complutense University of Madrid (UCM) explains, equine rhinpneumonitis

is caused by a herpes virus that is transmitted by the respiratory route.

"Herpes viruses are complex, are of frequent circulation and are widely distributed in the population. There are nine characterized equine herpes viruses, of which only one is notifiable to the World Organization for Animal Health.

EHV-1 is the most pathogenic and can cause respiratory, reproductive and neurological disorders, "he

says in a telephone conversation.

"EHV-1 clinical infections are one of the main causes of abortion in horses. Respiratory problems follow and thirdly, neurological signs, which are rare and associated with the outbreak that was declared in February in Spain . They present with mild to severe myeloencephalitis. If it is very severe it can cause paralysis, in 24 or 48 hours the horse can no longer stand up and must be euthanized, but

in other milder cases the animals can be treated and treated. they recover,

This outbreak originated in Valencia, he says, "is associated with genetic variant strains of this herpes virus type 1 with a specific mutation in the polymerase."

Why has this outbreak occurred?

According to Simarro, "there has been a host of circumstances. It has been an international contest that has been accessed by animals with different immunological status, from different countries, origins, ages, etc.

, and contagion has occurred with a dose sufficient to challenge the general immunological level of the population ", he points out.

Ana Velloso began receiving sick horses days after the contest and since then ensures that she feels like a doctor in an ICU of a Covid hospital.

She is the veterinarian in charge of the Equine Area of ​​the CEU Veterinary Clinical Hospital of the Cardenal Herrera University of Valencia, where for two weeks they have lived overturned in the treatment of 23 specimens with this virulent strain of the disease, which she compares with the coronavirus in horses .

"In fact, the diagnosis is made the same, by PCR or antibodies," he points out.

The biggest difference is that there is a vaccine but it has not been 100% effective against this mutation.

Almost 40% of the horses present nervous symptoms, when normal is between 5 and 10%," he

And, as Isabel Simarro points out, we are facing a preventable equine disease for which there are vaccines whose use is not mandatory (the only mandatory for horses that participate in international competitions is Influenza).

In general, horses with high genetic value and those of competition are vaccinated

. But the vaccines do not prevent infection, what they do is provide an elevated immunological status, reducing the clinical signs and transmission of the virus in the population. What we are seeing now is not something frequent. "

"It is being very severe.

There are horses that in a matter of a few hours go from incoordination of the hind limbs to being comatose, not being able to stand up on their own and showing much more advanced signs of central neurological disease that can even lead to euthanasia. It's a nightmare, "says Velloso.

When dealing with grand prize jumping horses, another of the main sequels is not appearing: abortions.

"About eight years ago there was an outbreak in a farm in Madrid where there were mares in gestation and they aborted," he adds.

Antiviral drugs, anti-inflammatory drugs, and vitamin complexes can be administered to treat the disease.

"In a preventive way, everyone was administering a drug called valacyclovir, which helps reduce the replication of the virus and the viral load but does not kill it. The only thing that veterinarians can do is give supportive treatment. The virus enters the nervous system and does not destroy it, but produces an inflammatory reaction that generates neurological effects, "says Ana Velloso.

"Vasculitis occurs and the nerves become inflamed. We have to treat them with anti-inflammatories, corticosteroids, we administer fluids, hypertonic. For the horses that can no longer stand we use hoists and special harnesses that help us raise and stand them up. when they present difficulties, "Velloso continues.

Treatment requires appropriate facilities to isolate all infected horses and hang those in need.

"We at the Veterinary Hospital had that provision and we were the ones closest to the outbreak. Initially we had an isolation area with a limited number of five boxes to be able to maintain the hospital's activity, but the number of horses was so high that we had "We have to open the doors for everyone. It was an emergency situation.

Now we are like a human Covid hospital, but with patients who have herpesvirus,

Expansion to other countries

The prognosis of the majority is good, "because those that go bad are noticed quickly", but this virus also leaves its consequences such as fever or paralysis in the bladder that must be treated.

"That forces us to have a permanent team pending."

Because of their status as grand prize show jumping horses, "we know that many of them are worth millions and that they are the livelihood of professional riders."

The recovery for them to compete again is estimated by Ana Velloso "from three to six months."

"We are already seeing some horses that almost have a normal gait. But they are athletes, they have highly developed muscles and, when they are at rest, they atrophy. It will take time for their neuromuscular part to be rehabilitated," he says.

According to their consultations with colleagues in the US, where there was a strong focus on competition horses five years ago, 80% will be able to resume the exercise, "but their owners have to be aware that it will be a long process."

This outbreak is already showing some ramification in Spain, "because

we have received a horse from Bilbao and another from Castellón that were in the contest", and there are foci in France, Belgium and Germany.

Regarding the severity of the outbreak, Isabel Simarro considers that "it is true that an outbreak on this scale had not been seen for many years, but not so much because it affected a significant number of horses, but because those that were to Valencia they have returned to their countries of origin and have been able to spread the virus ".

"I am especially concerned about the atrocity we have seen, very serious symptoms, and I am afraid that this is the tip of the iceberg," Velloso warns.

To contain it, they know the steps to follow: isolation, reduced mobility and control to detect asymptomatic.

EnvironmentThe journey of packaging to give it a second life