From "Desperate Housewives" to "Queen of Youth Literature", the inspirational history of "Twilight" author Mel 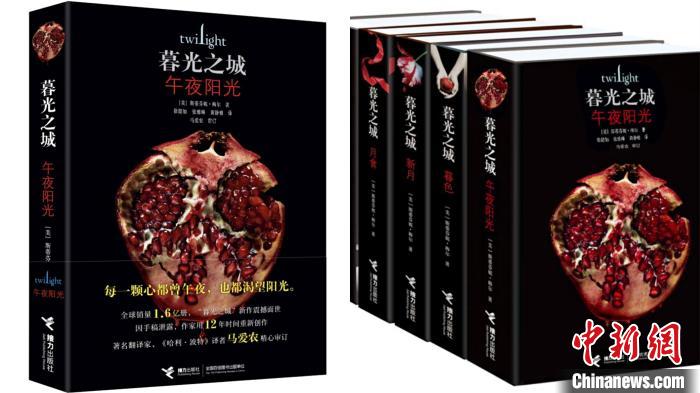 Her new work in the "Twilight City" series "Midnight Sun" will be published by Jieli Publishing House and will be launched in China in April 2021.

Why is she known as the "Queen of Youth Literature"?

The last time Mel was frequently seen in the Chinese public's sight was from 2009 to 2012.

In the past few years, Relay Publishing House has successively introduced and published four volumes of the "Twilight City" series of "Twilight", "New Moon", "Lunar Eclipse" and "Breaking Dawn". According to incomplete statistics, the sales volume at that time could reach 3 million. Around the book.

The performance of these four books in the global market is even more amazing.

As Mel’s debut, "Twilight" became a super bestseller as soon as it was released on the European and American markets in 2005. When the third "Eclipse" was released, it was even more popular at the time of "Harry Potter 7". Next to the top of the list of books in the United States and Asia.

The total global sales of the series reached 160 million copies, which means that at least 40 million people worldwide have read the "Twilight City" story.

The "Twilight Saga" series tells about the ordinary female high school student Bella who came to the rainy Fox town and met Edward, a rich and handsome boy. The two began to attract each other from the first meeting. Bella was interacting with each other. Gradually discover Edward's non-human identity.

Just like a lion and a sheep, a hunter and a prey, two people from different worlds finally overcome many difficulties and obtain a dreamy love that has been in love for a thousand years.

Because the novel is so popular, since 2008, this top Mary Su story has been jointly interpreted by Robert Pattinson and K (Christine Stewart) into 5 movies of the same name, which have been successively performed for 5 consecutive years. Released, and the heat continues until 2020.

On the TUMBLR (one of the most popular social networking sites for young people in Europe and the United States) in the 2020 movie rankings, the movie "Twilight" still entered the annual TOP5 12 years after its release.

The love story of a girl falling in love with a boy, whether through the abstract expression of text or the concrete presentation of film and television, can make thousands of young girls truly immerse themselves in it every year, chasing after all the details related to the story.

In the reviews of top European and American media, "Twilight City" was described as a literary phenomenon leading the direction of youth novel creation. Stephanie Meyer also wore the crown of "Queen of Youth Literature" and became "Time" Weekly. One of the 100 most influential people in the world in 2008.

Stills from the "Twilight" series of movies.

The creation of "Twilight" is the "spiritual escape" of real life

Before becoming the author of "Twilight" and the queen of youth literature, Meier had no writing experience, and his social status was even thousands of miles away from the novel creation circle.

She is a 32-year-old full-time housewife and a mother of 3 children.

Many people speculate that Mel, who turned out to be born, has a wealth of life and love experiences, and uses reality to nourish his works.

Mel once emphasized in interviews more than once: "I didn't date much at all in high school, and the few dating experiences I had were not very romantic." She even thought that in the real world, it is impossible to find true love as a teenager. of.

After going to college, Mel was dubbed a member of the "First Kiss Club" by a female classmate who was experienced in love. In a card passing game, a male classmate "for the purpose of teaching" took her to experience what kissing is.

At the age of 21, Meyer married Chris Qiang, a fellow in Arizona, and soon had three children. Her life has gone from a lacklustre youth to a calm marriage.

"In real life, I only have a long-term relationship, that is, my husband and I have been married for 25 years. This is not an easy task. We still need to work hard every day to communicate and compromise. True love has never Fictional love is so perfect, of course, it also has its own advantages.” Meyer described his true emotional life in this way when answering questions from readers around the world during the release of the new book "Midnight Sun".

Following this trend, most of Mel's life is going all the way to the drama of "Desperate Housewives", and it is the "reader gene" hidden in her that has changed everything.

Meier's other identity is a "senior book fan"-I read "Little Women" for the first time at the age of 8, and he couldn't help but read it again and again after he had nothing to do; he was crazy about Jane Austen and other fictional female writers. I often get into their novels and experience the love and hatred of the protagonist.

In this wonderful fictional world, Mel almost obsessively enjoys the spiritual pleasure that he has never had in real life.

When graduating from high school, Mel received the highest honor for American high school graduates, the "American Scholarship for Outstanding Students", and then entered Brigham Young University and chose to major in English Literature.

Mel did not confess too much what happened in the more than 10 years of working as a "housewife". She just used a "pessimist" to describe her attitude towards real life.

"If you always predict things with the worst results, you will usually be pleasantly surprised." Meyer said in the interview, "The novel is the only truly romantic place, when I want to'escape from the real life' At that time, he picked up his pen and wrote "Twilight City"."

One day in 2003, Mel had a dream after finishing housework: a young girl and a handsome and charming man were sitting on the sunny grass and chatting about love.

This scene later became the classic scene of the first "Twilight" in "Twilight", and it flashed back repeatedly in the film adaptation of the same name.

"I did not choose non-human beings, they chose me." When talking about the subject matter, Mel emphasized, "My subconscious mind is more fascinated by them than I thought. Because it is the inspiration generated in the subconscious, I am very It’s difficult to say 100% why non-humans are so attracted to me. I guess it’s because of their duality: dangerous enough to make people feel real fear; but they also possess the qualities that humans admire such as beauty, immortality, and strength. Of course, they have These costs are also very high."

Innocence, ignorance, and longing for love are the tickets to this dreamland.

Mel and her reader fans.

In fact, as the fifth volume of "Twilight", "Midnight Sun" was originally planned to be released in 2008.

A sudden leak of the manuscript disrupted all arrangements.

"I'm completely at a loss. I don't know how the manuscripts of the first 12 chapters were leaked, and I don't know how to prevent possible larger-scale leaks." Meyer said when recalling the 2008 "Midnight Sun" manuscript leak. "The four books published at that time and the film "Twilight" were all too successful. I had faced unimaginable pressure, and the manuscript leak was undoubtedly the last straw that overwhelmed the camel. At that time, I was unable to deal with it. The current dilemma."

The event ended with Mel's indefinite stagnation of the creation of "Midnight Sun".

Time has changed. In May 2020, 12 years later, Mel suddenly announced the completion of "Midnight Sunshine" and it was launched in Europe and the United States in August of that year.

When recalling the 13-year creation process of "Midnight Sun", Meyer exclaimed, "You can't imagine what a long and torturous experience writing this book." "Midnight Sun" is a non-human protagonist. Edward’s perspective reinterprets the gripping love story in "Twilight". The seemingly similar plot presents a completely different interpretation. This makes the original story, the love in it, and the character characteristics have two sides, and it is the first time to explain Open the mystery behind the story of "Twilight".

Mel’s construction of the "kingdom" is unprecedented.

"I like to inject a lot of imagination into my writing. I am constantly moving forward. But "Midnight Sun" is written within the framework of the established story, and it also needs to write completely different new ideas. This is for me. A huge challenge." She said that "Rebirth" (the sex repost of "Twilight", a love story between ordinary boys and non-human girls) launched in 2015 to commemorate the 10th anniversary of "Twilight" gave her new inspiration , She decided to get rid of the burden of the movie and fans on the story and the protagonist, and return to the original character setting of Edward and Bella.

The character traits of Edward in "Midnight Sun" are anxiety and pessimism, which are enough to make "Twilight fans" who thought they knew Edward’s character and the story of "Twilight" subvert their cognition-in Bei In "Twilight" from a pull perspective, she is always immersed in the joy of first love, never admits that there are any obstacles to love with Edward, and Edward is the hero who gives her romantic love. The overall tone of the story is sweet and warm; Edward is also It was the first time to fall in love, but he saw himself as an incorrigible villain. His original self-confidence was overwhelmed by questioning and guilt, and he believed that he was not worthy of a happy ending, which caused the tone of the whole story to become dark and obscure.

In just a few weeks, its sales in the European and American markets approached 2 million copies, and it brought all other published works of the "Twilight" series back to the top 10 of Amazon's youth books in the United States.

Sixteen years have passed, and the girls are still deeply attracted by Mel and her kingdom, and they are heartbroken by Edward's anxiety and hesitation.

In April 2021, "Midnight Sun" will be launched on the Chinese market, and the story about Mel and "Twilight" will continue... (End)