Fatima Al Mazrouei: I dreamed of one story and wrote 20 issues

The Emirati writer, Fatima Al Mazrouei, revealed that her dream in the beginnings was to write one story, so she had 20 different publications and won many awards, describing herself as a "voyeur" but in a positive sense, referring to the multiplicity of her productions between different literary genres such as story, novel and theater. 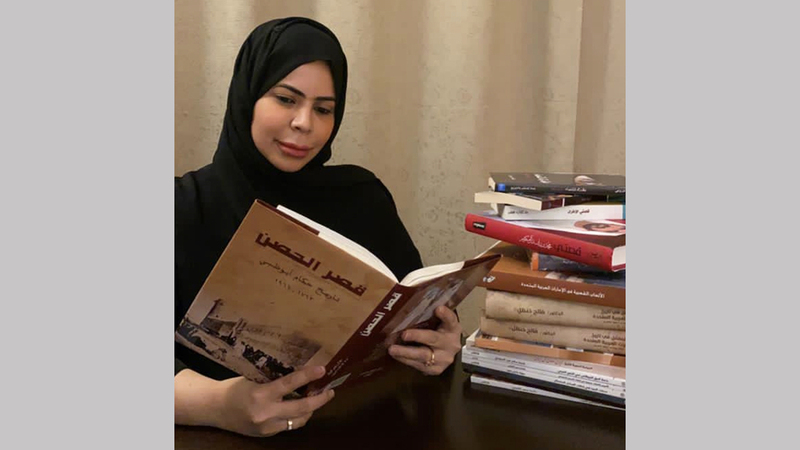 It describes itself as "voyeur" ... but in a positive sense

Fatima Al Mazrouei: I dreamed of one story and wrote 20 issues

Fatima Al Mazrouei is the head of the Historical Archives at the National Archives.

The Emirati writer, Fatima Al Mazrouei, revealed that her dream in the beginnings was to write one story, so she had 20 different publications and won many awards, describing herself as a "voyeur" but in a positive sense, referring to the multiplicity of her productions between different literary genres such as story, novel, play and script. To her literary curiosity and her tendency to experiment to choose the template that best suits the idea.

The Emirati creative woman advised young people not to hurry in writing to avoid presenting duplicate and imitated works, explaining that her beginning in writing was through the short story, adding during the virtual evening, organized by the Emirates Writers and Writers Union, Abu Dhabi branch, yesterday evening under the title: «Creative Experiences “I see that voyeurism is a beautiful one, as I used the concept of voyeurism in my writing. During my presence in different places such as malls, hospital, school, university, or even when I was among neighbors, I paid attention to details and made certain notes that attract my attention as ideas for stories And personalities, as I consider these places and gatherings an environment full of stories, ideas and details, and I also believe that ideas exist on the street, but the smart one is the one who captures them.

Fatima Al Mazrouei, who is the head of the Historical Archives at the National Archives, said that she began writing at the age of 17, and the stories and stories of her grandmother that she was telling her contributed to the emergence of her talent for writing, and she also benefited from the school library that provided her with access to many books. Noting that she was influenced by reading the works of writers such as Chekhov, Borges and Naguib Mahfouz, it helped her develop her talent.

She pointed out that she started with the short story, and with time she found that the story was not enough to express her thoughts, so she turned to the novel: “I went to the novel and it seemed a beautiful world that allows me to convey many great details, and my thinking about the novel may last for up to two years and then write it in two days. As happened in my novel (Dark Traps), which is one of my closest works to myself, and I was very affected by it even after its completion.

She noted her interest in many social issues and her bias towards women in her writings.

She considered that if the writer did not make a real addition to his writing, then he should stop, pointing out that she was dreaming of writing a story, so she wrote 20 different issues and won many awards.

In front of several key features, the most prominent of which is that she came with a generation metaphorically called the Millennial Generation, as opposed to the first generation who founded the short story in the Emirates, which was interested in dealing with the social problems that existed at the time, so the Emirati story came to be strong and chunky comparable to its Arab sister, i.e. the Emirati story was born Completed, unlike the Emirati novel, as I was concerned with exploring the future for fear of values ​​and the homeland from it, so it came loaded with symbols of the past and originality, while the founding women's story was preoccupied with social and women's concern.

On the other hand, the millennial generation, whose production was dominated by female writers, tended to turn the tables on the man’s writings, and make him in the story an object, while the female searches for her role in society and life, and from here the story texts entered new areas that differ from what the founding generation dealt with, such as concern In particular, the special problems of women and the problems of the body, and the creation of new contexts in which women are active in the text and are the heroine and narrator, and have established a very special story-telling soul for the short story in the Emirates.

The second feature that Sabri stopped in front of was the focus of Fatima's writings on issues of isolation and oppression, and death repeated in abundance in her early works, which may be equivalent to grief or oppression, or was a way to reconsider the human vision of life and the changes and changes that happen to it, adding: "Death in the first stories of Fatima Al Mazrouei is very remarkable, indicating the loss of freedom, masculine oppression, or social life. Death also represents an exposure of the silence about human relationships in society and the family, their cruelty and imbalance, and a sign of freedom, exit from crisis and oppression, and the release of the distressed."

Sabri considered that "there are women's attempts to rebel and search for a way out of oppression and the pressures they face, but unfortunately there is a general acquiescence among all female writers of this generation to the general situation, but it is good that they came up for us with a new concept of the story in the Emirates."

On the current scene in the creative arena;

Writer Fatima Al-Mazrouei saw that there are many young writers of both sexes, but there are observations that stopped before her, including the rush to write the novel, which makes many of it an imitation and a repetition, and does not carry anything new.

And she continued: “Many of them, I find them like a disaster, and unfortunately publishing houses publish them, so these young people must realize that writing is not easy, and that reading is very important, and they must diversify their readings as much as the place, and be careful in writing and publishing and searching for fame and the spotlight, and they also have to take advantage of the current momentum. What the state is witnessing, such as the realization of the dream of access to space, along with many issues, events and major initiatives in the country, taking into account the intelligence in the method of presentation, so writing is like a game in which there is no loser and successful, but a challenge with oneself.

“If the creator does not make a real addition, then he should stop .. I advise young people not to rush to write.

- “My thinking about the novel may last for up to two years, then I write it in two days, as happened in my novel (Dark Traps).”