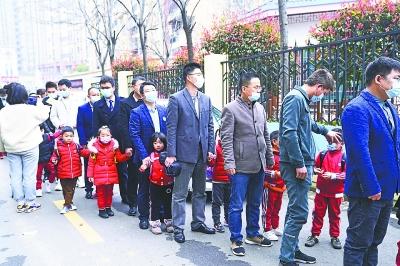 "Pick up and drop off with dad, mum for the holidays"

The school sets up a dad pick-up day

"Formal dress" attends the day of Daddy's pick-up and drop-off.

Dad was very happy to pick up and drop off the children.

Set up "Dad Pickup Day" every 8th every month

Rose No. 2 Kindergarten in Hanyang District will set up March 8th as "Daddy's Pick-up Day".

At 7:40, the children arrived very early in the company of their father, and one by one they held their father's hand and looked very excited.

On this day, the park formally established the Dad Teachers Studio—Good Dad Alliance, which organized all the dads in the park to actively participate, so that the children could feel the company of their father’s love.

The reporter saw at the scene that the children pressed their handprints on the signature wall, and the fathers then signed the children's handprints in turn.

The teachers handed over the Q version of the activity badge, which was worn by the child for the father, and the ceremony was full.

There were 253 parents in the park and 231 dads were present.

Last weekend, Wuchang Experimental Primary School and its branch campus issued a special proposal to all students—"Dad Pick-up Day" proposal. It is recommended that dad come to school to pick up and pick up the child, and take the child to the gate of the school. Holding the child's hand to go home.

Several schools have designated the 8th day of each month as the "Dad's Pick-up Day", and in the case of holidays, it is the "Dad's Companion Day".

Rose Eryou released a video interviewing the children in the early stage. Wu Yankun, the most burning young teacher in Wuhan and the host of the Dad Teacher Studio, said with a smile: "As soon as the video came out, the parent group exploded, and the mothers were overwhelmed. Expressed support, saying that this is the most joyful Women’s Day gift! Some dads expressed strong support, and some felt that the demands in the children’s videos were not accurate."

The father of a child Li Yichen in the second class said: "At first, I thought this activity was a bit "cheating", but after watching the video, I found that I was not doing enough, so I came to challenge!"

Zhang Xiaomei, the director of Rose No. 2 Kindergarten, said: “In the process of chatting with children, many children have a lot of regrets about their father’s company. In order to promote the return of father’s role to the family, the “Good Dad Alliance” was established to promote the role of good fathers. Good dad, let the company of father's love become a new fashion."

Remind Dad of the indispensable seat on the pick up day

Among the pick-up team at the Nanhu campus of Wuchang Experimental Boarding Primary School, there is a dad who is very hardworking.

His daughter Li Zhixin has been picked up and picked up by him since enrolling in school last year: “Shooting and picking up children is not necessarily the responsibility of the mother or the elderly. The father must also bear the responsibility of raising the children. This is not a burden. Picking up and picking up the children every day makes her closer "Dad Li has never been absent during the growth of the child. He thinks that the child is also very cheerful and sunny, has many friends, and likes sports.

"Dad picking up and picking up children is only an external form. It is important to tell parents through the'Daddy Picking Up Day' that fathers must have an indispensable role in family education. No matter how busy they are at work, they should also spend more time to accompany their children's growth. , To better fulfill the responsibilities of father.” Zhang Jiguang, the principal of Wuchang Experimental Primary School, said that father plays a pivotal role in parenting. Father has a great influence on the growth of children. This influence involves children’s intelligence and physique. , Emotion, personality, etc., play an important role in children's independence, rationality, strength, exploration, creativity, etc., especially in the cultivation of excellent qualities such as sunshine, masculinity, perseverance, candidness, and responsibility of boys. important influence.

Zhuo Ping, the dean of the School of Preschool Education of Wuhan City Vocational College, said that the "Good Dad Alliance" aimed at the lack of fathers’ participation in family education, which is a common concern in society.

The kindergarten set up a series of "dad activities", on the one hand to stimulate and promote the father to participate in the child's growth, on the other hand, let the children better feel the company of father's love.

Can work and bring the baby, this "bao mom" factory attracts "bao dad" to join

"Come on, everyone has a share, everyone can go home and rest after receiving gifts!" At 11 o'clock noon on March 8, Xiang Jingyan enthusiastically handed out "Goddess' Day" gifts to employees in the garment factory. .

In 2018, the 43-year-old Xiang Jingyan founded Wuhan Jiashi Clothing Company in Huangpi. Unlike other clothing factories, almost all employees here are women.

Since its establishment, more than 130 "bao moms" have been employed locally.

By working in a factory in front of the school, more than 130 mothers have found a balance between taking care of their children and working.

And all this stems from Xiang Jingyan's accidental experience and bold attempt.

In 2018, after giving birth to her second child, Xiang Jingyan, who took the child at home, could not find a suitable job and decided to open an online shop at home.

At first, she represented other clothes to Jingyan, and later found a factory for processing.

Later, by chance, when Xiang Jingyan was visiting the supermarket, she saw a "bao mother" who was arguing with her husband because she wanted to buy a certain product.

Faced with her husband's yelling, the mother replied, "If I didn't take care of my children at home, I could also make money and buy things I like."

This scene deeply touched Xiang Jingyan. She believes that there must be many mothers who have the same experience.

Therefore, she decided to open such a factory that specializes in recruiting "bao mothers".

Within a week, sisters Xiang Jingyan and several "bao moms" set up a "bao mom" factory.

"Actually, I didn't want to make much money from this factory, as long as I can ensure that these precious mothers have a stable income." Even though it is very difficult, Xiang Jingyan has not forgotten her original intentions. She hopes to make money through this factory. More "bao moms" take care of life and work, realizing their own value while being financially independent.

It is understood that the factory is set up next to Wangjiahe Middle School, elementary school, kindergarten and other schools, and many employees' children are enrolled in these schools.

The factory area has also opened up a study room where children can come over to do their homework after school.

The factory has always implemented a flexible working time system.

When the children are in and out of school, "bao mothers" are free to pick up and drop off the children.

The "bao moms" of the factory cherish this work very much and take the initiative to complete their work. Even during the noon break, the "bao moms" will try their best to do more work.

Xiang Jingyan said that "bao moms" can earn more than four to five thousand per month.

At present, the factory has finally begun to make a profit, with monthly sales reaching about 3 million yuan.

The clothes in the factory are currently sold throughout the country, and some products are exported to Southeast Asia and other places.

"Everyone likes this job very much. Like sisters, we can create value through our own labor together. We can take care of our family and have income every month." During the interview, all the employees in the factory showed sincere smiles. .

Xiang Jingyan said that in the future, if necessary, she also plans to open the Baoma factory to more places so that more housewives can find employment at home.

Able to take care of work and bringing a baby

A "Bao Dad" came to the "Bao Ma" factory

Mr. Yang, who brought the baby by himself, told reporters that he used Douyin to visit the "Baoma" factory last year, and then he got in touch with Xiang Jingyan through a private message.

Being able to work and bring a baby, Mr. Yang believes that this will kill two birds with one stone.

"Independent women are the queen on their own." "Mother is serious is the best role model for children." The slogan of the workshop inspires the "bao moms", which is also Xiang Jingyan's life motto.

Xiang Jing Yan hope these words give Baoma seats and female workers across the country: "Women must be independent, independent woman is the queen on their own."

She believes that even if the pressure of life is thrown away, women should also participate in work and achieve economic independence, so as not to derail from society.