One of Sweden's most influential metal bands has lost its voice - on Monday, Lars-Göran "LG" Petrov died in the suites of cancer. "He has changed so many lives with his voice, his music, his character and his unique personality," the band wrote on Facebook. 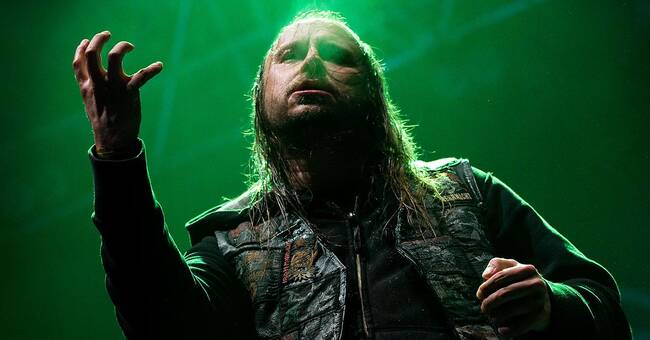 With its chainsaw guitars and HM2 pedals, Entombed revolutionized the death metal.

Albums such as "Left Hand Path" (1990) and "Clandestine" (1991), recorded in classic Sunlight Studios, came to establish Swedish death metal as a world export.

Entombed also broke new ground when they performed with a ballet ensemble at the Royal Opera, which in the program magazine warned of high volume and provided hearing protection for the audience in the closets.

The performance was later released as a live album.

LG Petrov was with Entombed from the start and also sang in the predecessor Nihilist, as the band was called before 1989. Entombed has had a long line of members, including The Hellacopter's frontman Nicke Andersson.

LG sang with Entombed between 1988 and 1991 and between 1992 and 2014 but has also released records with Firespawn and Comecon.

In 2014, he started a partly new band, Entombed AD, after Entombed split into two different constellations.

In August 2020, LG Petrov reported that he had incurable bile duct cancer, something that prompted fans and other bands to donate money to a fundraiser for his treatment.

Now the singer has died.

"We are devastated to announce that our beloved friend Lars-Göran Petrov has left us.

It is with the deepest grief that we must announce that Lars-Göran Petrov has left us ", writes Entombed AD on Facebook.

The band's manager has confirmed the death for SVT.

"His abyssal roar will echo in metal history"

Tompa Lindberg, singer in At the Gates got to know LG Petrov in 1987 when the death metal scene was developing.

- It took so much of us to do what we did when we were 16-17 years old, then you are close to each other for life.

It's one of us who has passed away.

It feels, he says.

Orvar Säfström, journalist and singer on Entombed's EP "Crawl" from 1991, tells SVT that a Swedish music icon has left us.

LG Petrov was for most of his life a central figure in death metal, a concept.

His abyssal roar will echo in metal history long after the rest of us have also checked in.

"He was the Ozzy of Death Metal"

Tobias Forge, frontman of Ghost, says that LG Petrov was a role model:

- Ever since I was little, he has been a giant star and influence, both vocally and as a frontman.

He was the Ozzy of death metal, always very happy and smiled on stage, which was actually forbidden in hard music.

Always nice and inclusive towards us who were a little younger.

And the monstrous voice, it was unique, he tells SVT.

Even outside Sweden's borders, the legendary growler is mourned by fans and colleagues.