The series "Ginny &amp; Georgia" continues to blow a wind of modernity committed to the genre of teen movies. But by dint of wanting to do well, she wouldn't do a little 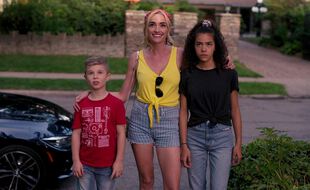 is currently in the top 10 most watched new releases on Netflix France.

This entertainment, adopting a feminist, anti-racist and modern posture, brings us into a universe that borrows as much from teen movies as from romantic comedies, from social dramas as from thrillers… And it is rather successful.

However, the series, accused by some of being a bit of a lesson-giver on feminism and anti-racism, gives rise to several controversies ...

Like Paul Randolph (Scott Porter), the mayor of Wellsbury - chic and trendy suburb where the intrigue takes place - crossing Georgia (Brianne Howey) for the first time, we too were seduced from the first episode by

If she does flirt with clichés, too, Georgia, far from being a potiche, is an independent 30-something, with solid common sense (and con), which makes her likable and funny.

As for her 15-year-old teenager, Ginny (Antonia Gentry), she made a strong impression from her first literature class with a tirade about the lack of black authors on the program.

We are conquered by this false air of Hermione Granger, a little more rock, more intersectional too.

Even if we evolve in an easy environment, the series also surprises by proposing to make a counterpoint with a much less golden America when it comes to talking about Georgia's past.

From each episode a lesson you will learn

The series tackles current issues, whether trivial or profound.

As a good self-respecting teen show, we evolve in the midst of teenage issues - and especially Ginny.

The life of adults is also present, even if less developed, not uninteresting in the way of approaching the issues around parenthood.

puts morality at the heart of the series, especially with a voiceover as soothing as a secret teen diary.

Obviously, this is not a conservative moral but a current one, which therefore takes into account feminism, the LGBTQI + cause and the fight against racism.

So much so that many spectators had the feeling of attending a lesson in progressivism, and accuses the series of

: the idea that a work seizes on causes, claims them loudly and (too) strongly, so as to self-promote.

In the United States, the critics of Vulture and

, but also part of the tweetosphere, saw in the series a self-righteous excess of zeal.

Is the worm in the fruit?

Above all, as committed and militant as the series is, since its release, it already has to its credit three controversies that touch precisely on these claimed strengths: feminism and anti-racism.

First, there was the famous controversy caused by a replica of the series.

Ginny says to her mother, who inquires about her romantic relationships, "What does that matter to you?"

Fans like the pop star were quick to react by accusing the sexist character of the line.

Second yellow card on the side of feminism.

But the most dissonant downside for this series featuring a black teenager occurred in episode 8. Hunter (Mason Temple) and Ginny argue and accuse each other of being "too white" (Hunter being therefore American white and Taiwanese; Ginny being mixed race White American and African American).

Several Internet users have pointed to a caricature and very partial dialogue in his way of approaching the question of the place of the mestizos.

Debra J. Fisher and Sarah Lampert, creators, white, of the series, however defended themselves by arguing that this part of the scenario had been written by Briana Belser and Mike Guayo - who are black in this case.

Despite these controversies and the shortcomings of a series that skillfully plays with the expectations of its spectators (hello the clichés on the Femme fatale stuck to Georgia), season 2 is expected firmly.

"Dawson" on Netflix: Why you have to (re) watch the teenage series today