"Old prisoners are very afraid of dying in prison"

Aymone de Chantérac explains to "20 Minutes" how the filming of her documentary on the daily life of prisoners in French prisons, broadcast on Sunday, took place. 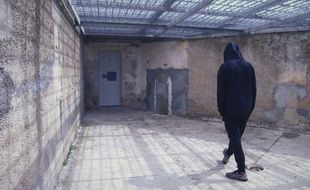 Image taken from the Forbidden Zone issue on life in prison.

“The real life of detainees”: this is what the

suggests to the public on Sunday.

A team from the M6 ​​magazine went to the Agen remand center at the Eysses detention center (Lot-et-Garonne) to meet these men, sentenced to more or less long sentences, who find themselves sometimes in crowded cells.

spoke with Aymone de Chantérac, the director of this report, giving the lie to several received ideas about the prison world.

What prompted you to start a story about life in prison?

I worked a lot on the various facts, I followed a lot of trials at the beginning of my career and I wanted to see what happened after the conviction.

I wanted to know what was the daily life of these men behind the walls.

I wanted to take an interest in small establishments.

I had the impression that I could find my way around more and have more free and privileged access to inmates and supervisors.

The choice of witnesses was made over the course of my meetings.

I first left without a camera.

Some prisoners came to us, I went to meet others because I knew that their paths could interest me.

I was trying to talk about incarceration from start to finish.

Was it easy to build trust?

Time has been my ally.

It is as and when confidence sets in.

There was a good immediate contact with some supervisors who were curious and wanted to show their daily life.

Over time, we were more and more independent in the prison, because things were going well, everyone saw that we never filmed in secret ...

When an inmate shows you the phone he hides in his cell, it is because he trusts you… Did that pose a problem for your conscience?

I did not ask the inmates to show me their phones, I never asked them.

Whoever showed me his phone did so very spontaneously.

I was presented with a fait accompli and I said to myself “Ok, I'm filming, it's interesting.

I did not go to see the supervisor afterwards.

I paid attention, for the broadcast, to certain things: the detainee in question was caught two months later, so it was not a problem to broadcast this footage.

Another who shows me his phones at the end of the movie has since been released from prison.

They didn't do a disciplinary quarter because of me.

What were the biggest difficulties?

The difficulty is that you have to wait for everything.

The doors are closed, the different buildings are separated from each other.

You need permission every time.

If something happens at the other end of the prison, we can't be there because we have to go through the gates, be accompanied by a supervisor who has the keys ... But we still enjoyed a great freedom and it was very pleasant.

I interviewed whoever I wanted and the inmates were free to express themselves.

When we were in the process of editing, the prison administration opposed the dissemination of images of certain prisoners with their faces uncovered in relation to their belongings, in order to protect the victims… There were things that I did not know as much as I did. I did not have access to the files: I only had the word of the detainees.

Is it difficult to find the balance, the right place between your position as a journalist and the empathy that witnesses can inspire in you?

It is true that it is complicated.

When you spend a lot of time with inmates and see their daily lives, you can't help but feel empathy, it's human.

I kept in mind that they weren't there by chance either.

I tried to be neutral as much as possible, never to be judgmental.

They have already been tried, what interested me was to see how they lived their prison, their hopes, their daily life.

Some seemed nice to me, but it was on a given filming time.

Paradoxically, what is “good” about a shoot like this is that you only see the inmates when you are there.

I wasn't allowed to phone them, I didn't have a daily relationship with them.

I was able to preserve myself and get out of it.

In other documentaries, we are constantly with witnesses on the phone, we support them a lot.

There, the fact of turning in sessions established a distance.

Is there anything in particular that you learned or that left an impression on the daily life of the detainees?

I felt that, for those sentenced to long sentences, it is difficult to project themselves, there are necessarily phases when they are completely discouraged.

I think of an inmate sentenced to eighteen years in prison at the age of 65 who said to me: "For me, that is equivalent to a death sentence, I have health problems ..." afraid of dying in prison.

There is one that I interviewed but who is not in the movie and who has since passed away.

Being sick in prison is hard, it's complicated.

The situation of minors deprived of their liberty is "worrying", according to a report

A new prison in Nîmes, where prison overcrowding is exploding