Grotesco back at the Melodifestivalen: "The Russians stay calm"

Twelve years ago, there was success in Sweden and condemnation from the Russian embassy. On Saturday night, Grotesco is back at the Melodifestivalen with a follow-up - and a new song. - I do not see any obvious risk of provoking any superpowers. But you do not know either, says Michael Lindgren who plays Russian DJ Trexx. 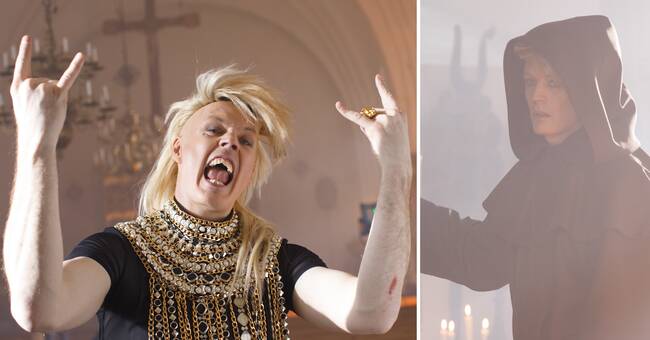 When it went in 2009, the Grotesco gang had only done the first season of their TV series on SVT.

They were still relatively unknown.

The Midnight was a miniseries in five parts.

Hailed as one of the best interludes

They would find artists for the Melodifestivalen's various competitions.

But more or less each program ended with Pihlman himself making different versions of his own dance band song "Tingeling".

Finally, they got help from the Russian DJ Trexx, played by Michael Lindgren, who in the final of the Globe did "Tingaliin (Tingeling Russian Base-lovers remix)".

It was a resounding success.

The TV audience hailed it as one of the best mid-nights ever and the Grotesco gang's careers took a real hit.

When Grotesco is now back in the Melodifestivalen, it will be with a relatively clear follow-up.

The same Pål Potter is sent out to Europe to try to find the right DJ Trexx to persuade him to make a comeback in the Melodifestivalen.

And it ends in about the chaos you can expect.

- DJ Trexx as a character loves eurotechno but he has problems right now because the whole of Europe is shut down due to the pandemic.

So he has gone to a monastery, says Michael Lindgren.

- He has a song going on but it may not be like Pål Potter thought.

It's been 12 years since last - how many times have you been asked to join again?

- It is a few times, but you feel that why should we top it.

It's a bit suicidal.

But now we have become so old and gray that it does not matter.

Is it a kamikaze mission?

I hope people find it fun and that it can cheer up in covidland.

The Russians calm down

After the Grotesco gang's performance during the final of the Globe in 2009, the Melodifestivalen received official condemnations from the Russian embassy.

Russian authorities were not quite as amused by DJ Trexx as the Swedish TV audience.

But this time there will be nothing like that, Lindegren thinks.

- It is difficult to say in advance.

I do not see any obvious risk of provoking any superpowers.

But you do not know either.

People get angry about weird things.

If I were to invest money, I would say no, the Russians will probably stay calm, he says.