The US Space Agency (NASA) said that the agency's Perseverance spacecraft made its first flight on the red planet (Mars), moving 6.5 meters in 33 minutes. The short flight, the day before yesterday, was a test of mobility, as it is being conducted Tests of spa systems 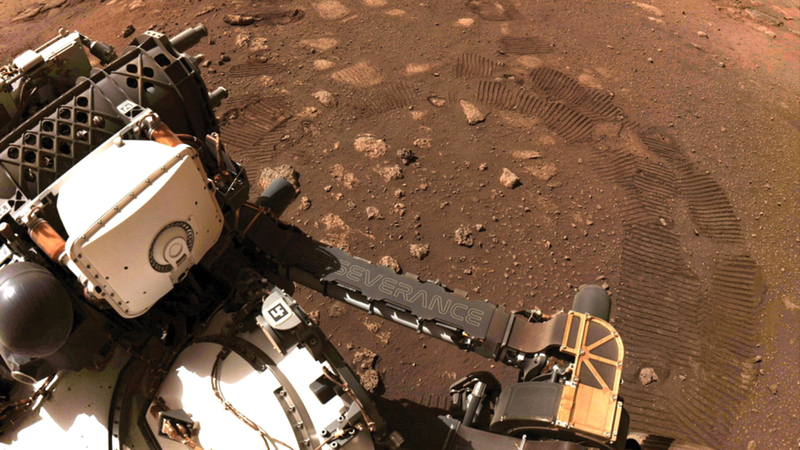 The spacecraft made it in 33 minutes

The short flight was a test of mobility.

The US Space Agency (NASA) said that the agency's "Perseverance" spacecraft made its first flight on the red planet (Mars), moving 6.5 meters in 33 minutes.

Yesterday's short flight was a test of mobility, as tests of the probe's systems were being conducted.

NASA aims to get Perseverance to make trips of 200 meters or more as soon as it begins its scientific exploration.

The probe moved forward four meters, then turned to the left, then retreated 2.5 meters to stop temporarily.

"We are now confident that the command system is ready to operate and capable of transporting us to any place the science leads us to within the next two years," he added.

The spacecraft, which weighs about 1,000 kilograms and is the size of a small car, landed on Mars in a precarious landing maneuver on February 18 after a journey of about 480 million kilometers through space.

Perseverance is expected to study the Martian surface for at least two years, as it examines the climate and geology and collects samples of rocks and soil.

The spacecraft landed in a huge crater called "Jizero", the site of a former 3.5 billion-year-old lake, which scientists say could provide evidence for the presence of previous microbes on Mars.

Mars has had water on its surface for billions of years, a fact which has led to speculation that there may have been some form of life on this planet.

• The spacecraft is expected to study the surface of the Red Planet for two years.