The Belgian-Congolese singer sang a duet on Thursday evening with Gaia, one of the twenty-six artists competing in what is the biggest musical event in Italy 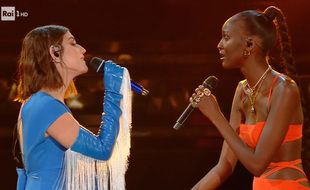 Gaia and Lous and The Yakuza as a duo at the Sanremo Festival, in March 2021. -

Lous and The Yakuza to conquer Italy.

The Belgian-Congolese singer sang this Thursday on the stage of the Sanremo Festival, the most important musical event of Italian song.

("I fell in love with you"), success of Luigi Tenco, with Gaia, one of the twenty-six candidates for this 2021 edition.

Nominated last month in the female revelation category at the Victoires de la musique, Lous and The Yakuza, is the only non-Italian artist to have played the duets within the framework of this third evening during which the competing artists were to perform on a cover of a classic from the Italian repertoire.

The two women, face to face, performed this love song, adding some lyrics in French.

Their performance (visible in full here) has inspired enthusiastic comments on social networks.

“I felt all the emotion of Gaia and Lous, and it moved me.

The song, we know, is magnificent and they interpreted it very well.

"Gaia and Lous, impeccable, true and genuine," greeted another.

It was elegant and very delicate, this song is very difficult, it is like crystal, you have to sing it with absolute tact and delicacy ”, we could also read among other laudatory messages.

Lous and The Yakuza has thus been discovered by many Italians, but it is not completely unknown on the other side of the Alps.

, was crowned platinum there.

At the end of February, she released an unreleased track,

, performed in the company of rapper Sfera Ebbasta, one of the most popular transalpine artists today.

Lous and the Yakusa exhibits his human "Gore"

Italian song and France, it's the story of a love (and a lack of love) ...