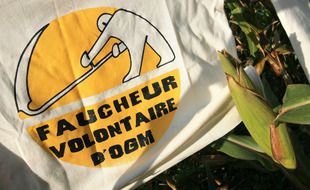 About fifty anti-GMO activists took part in the action.

They gutted and scattered several hundred bags of sunflower and rapeseed seeds.

Anti-GMO activists on Thursday carried out a surprise operation bringing together around fifty voluntary mowers in an agricultural cooperative in Castelnaudary, in Aude.

"Oilseed rape and GMO sunflower, for months an outlaw government," proclaimed one of the banners brandished by the intruders who sat in the middle of a warehouse before being evacuated by about thirty gendarmes.

The activists targeted seeds obtained by “New breeding techniques” (NBT), a process consisting in modifying the genome of plants without inserting a foreign gene, but which the reapers still consider as GMOs.

Julien Denormandie, the Minister of Agriculture, is not of this opinion.

He estimated at the beginning of January that the NBT "are not GMOs", but technologies allowing "to make appear earlier a variety which could have appeared naturally at a given moment".

However, the Council of State ruled in January 2020 that NBTs should be subject to the same regulations as GMOs, giving the government six months to modify the Environmental Code in this direction.

This is why, for the reapers, France has been illegal for six months.

GMOs: Argentina becomes the first country to authorize the marketing of transgenic wheat

Gers: With its donkeys from the Pyrenees, the Hitton farm voted "Favorite farm of the French"