The paint has not dried yet, but Sukdeep Singh, the owner of the house, began to imagine refugee families living in this former hostel in the Austrian city of Baden, where he himself spent the first years of his life in Europe. This is where he lived after leaving the Punjab region in India, as a teenager. To start h 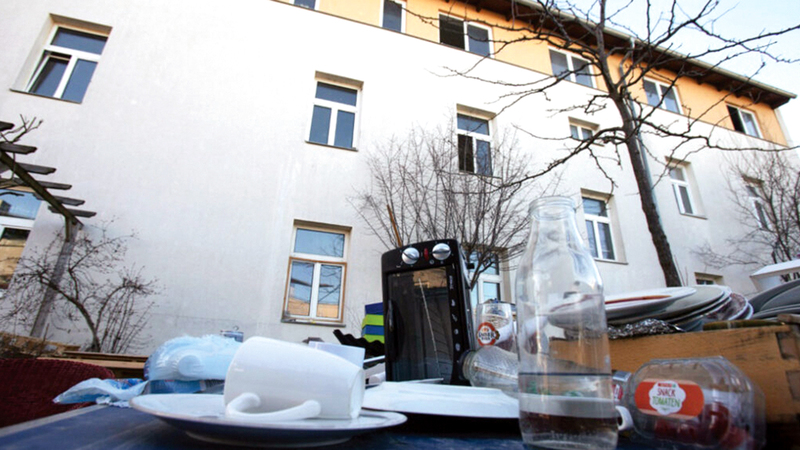 The paint hasn't dried yet, but owner Sukdeep Singh is beginning to imagine refugee families living in this former hostel in the Austrian city of Baden, where he himself spent his first years in Europe.

This is where he lived after leaving Punjab, India, as a teenager to start a new life in Europe.

When the NGO that previously ran the place as a shelter for unaccompanied migrant children announced that it would not be able to continue running it, Singh stepped in to rescue it from the hands of real estate developers.

"I did not want anyone who had nothing to do with it or its history to buy the drug," said Singh, a father of three young children.

Singh's story began with his arduous journey through Russia and Eastern Europe before arriving in Austria and at Laura Gatner's home, a shelter for about 50 unaccompanied youth.

On the top floor of the three-story house, he points to a corner of a 12-square-meter room, and says, "Here was my bed in this corner, and here was the second bed" on which his roommate, an Afghan teenager, was sleeping.

During the six years he spent here, he learned the local language, made friends and played soccer with them.

The terrible house, located in an industrial area, has turned into a symbol of perseverance and benevolence for Singh.

It was also here that Singh met the Jewish actor and writer Otto Tausig, who fled the Nazis to London. Taouzig devoted the last half of his life to charitable work, helping hundreds of children working in mines in India and refugees in Austria.

After collecting money to buy the house, the author gave it to the Protestant charity Diaconi, to use it as a shelter for young people like him, who left their homelands.

The house is named after Taouzeig's grandmother, Laura Gatner, who died in a Nazi concentration camp.

In this place, social workers, professors, and psychologists helped Singh understand the local culture and master the country's language.

He says he was treated with respect and graduated from a technical institute.

Taouzig became his mentor, providing him with the funds necessary to obtain his university degree.

Singh, a project manager at the multinational Siemens, learned from an old friend that the building, which he called his home, was up for sale.

Diaconi says the decision was taken due to "insufficient referrals" from the regional authorities for residents from Lower Austria.

And with the European Union strengthening controls on its borders in recent years, the rate of new arrivals has decreased.

The number of "unaccompanied minor asylum seekers" decreased from 8,300 in 2015 to 390 after just three years.

At the same time, Chancellor Sebastian Curtis made his hard-line anti-immigration stances public, winning many votes from the far-right Freedom Party.

"The welcome I got was just not the same," Singh says.

Although he will have to rent most of the 16 apartments for a fee to pay off the mortgage, he will leave at least four apartments for free at the service of asylum seekers' families.

A young mother and daughter, who are currently living in a government-run asylum center, will be among the first residents of the house.

Three refugee families are expected to move in upon completion of the building's renovation in March, the same month Singh arrived here in 2003.

Singh is proud of his accomplishments and for continuing to carry the legacy of Taouzig.

"If you are looking for a role model, don't look at the rich who have a lot of money," he says.

Look at those who have a big heart. ”

“If you are looking for a role model, do not look at the rich who have a lot of money.

Look at those who have a big heart. ”