China News Service, Jinan, March 4th. Title: A 15-year-old boy taught himself electrician knowledge and dreamed of building an airplane and "flying" out of the mountains   Author Sun Tingting   Use a wire brush to wipe off the grease, and then use an electric air pump to blow away the debris... On March 4, in Gudun Village, Aishan Street, Gangcheng District, Jinan City, Shandong Province, 15-y 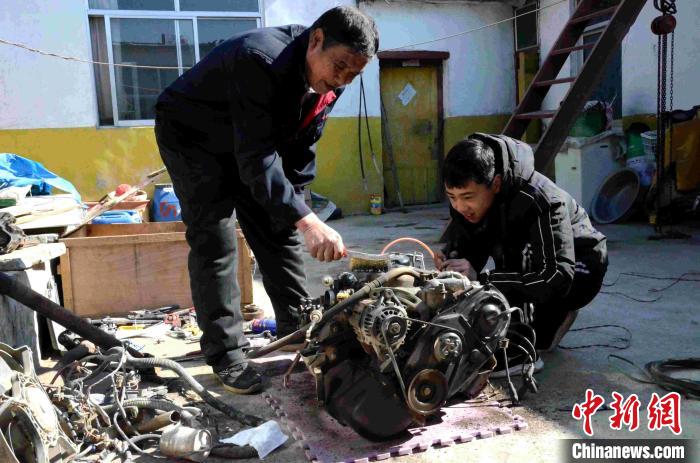 China News Service, Jinan, March 4th. Title: A 15-year-old boy taught himself electrician knowledge and dreamed of building an airplane and "flying" out of the mountains

Use a wire brush to wipe off the grease, and then use an electric air pump to blow away the debris... On March 4, in Gudun Village, Aishan Street, Gangcheng District, Jinan City, Shandong Province, 15-year-old Qi Xiangshuo was wiping an old one with his grandfather Wu Zengxi car engine.

After they cleaned the engine and repaired it, they would install it on the helicopter carrying Qi Xiangshuo's "Flying Dream".

Qi Xiangshuo and his grandfather Wu Zengxi are wiping an old car engine, which he recycles from a waste recycling station.

Qi Xiangshuo rubbed the oil on his hands, took out a card with his name affixed, walked into his "studio", inserted the card into the power socket on the wall switchboard, accompanied by a "ding dong" The sound of music, the lights in the work room turned on.

Qi Xiangshuo sat at the table, took out two electronic circuit boards from the drawer, and started to connect the wires.

"This is also a part of the aircraft. After it is connected, it will serve as the receiver of the aircraft." He pointed his finger at the helicopter sketch on the blackboard.

Qi Xiangshuo modified the electric dial at home. He studied the principle of the hotel access card. He added a delayed power off function to this electric dial. After the power card was removed, the lights in the room would be delayed for more than 10 seconds before turning off.

At present, the sketches have been designed and some waste parts have been collected.

If there is a chance, he would like to look at the construction and assembly steps of the aircraft where the helicopter is manufactured.

"The helicopter doesn't need to be too advanced. It can accommodate me to sit in by myself, fly over Aishan behind the village, and take a look at the sky with a wider view."

Every time Qi Xiangshuo gets a "baby", he cleans it up and repairs it to normal use.

In this studio of Qi Xiangshuo, you can see densely packed wires, circuit boards, various ammeters, power meters and other instruments and watches, as well as his inventions and productions.

He also wrapped a book called "Construction Electrician" in a plastic bag and locked it in a cabinet separately.

"A lot of knowledge is learned from this book, including the use of electrician's common meters, the basic principles of circuits, and wiring techniques."

"I made this'oil-immersed power amplifier sound' for a month. The circuit parts such as wire boards and copper wires were removed from the circuit board, assembled by welding, and placed in a glass bottle filled with gasoline." Qi Xiangshuo introduced , "Oil-immersed amplifier and sound" was designed by him during his online class at home in early 2020.

"The audio uses the oil in the high-voltage transformer. The advantages of this design are insulation, fast heat dissipation, and beautiful appearance."

In the memory of his family, Qi Xiangshuo has been trying to invent and create since he was 6 years old.

Wu Zengxi was an electrician. Talking about his grandson's hobbies, he told reporters that Qi Xiangshuo liked to dismantle things since he was a child. Gasoline engines, electric drills, etc. had all been "operated" by him.

"It is the nature of boys to dismantle things. It is the most direct and powerful way to learn knowledge." Wu Zengxi said. Every time Qi Xiangshuo "disassembles eight pieces" of some waste equipment and parts in the house, he can still assemble it, and also Some broken electrical appliances can be repaired.

"When electricity is involved in the disassembly and assembly process, I still worry about the safety of the child."

"My Bluetooth switchboard was made by Qi Xiangshuo when he was 11 years old. After turning on the mobile phone's Bluetooth, it can be connected to the switchboard, and the switch in the corresponding area can be disconnected by operating the phone. There is no need to manually push and pull the switch." Qi Xiangshuo Her aunt Wu Yanli said that she often publishes videos created by her nephew on online platforms, and now has tens of thousands of fans following.

In the video shot by Wu Yanli, Qi Xiangshuo once used 2 mineral water bottles to make a small washing machine, used a wooden wine box to make a square dance sound for grandma, and used a waste funnel to make a corn peeler...

On Qi Xiangshuo's desk are the books he usually reads, as well as the electrical appliances he refitted with the objects he found everywhere.

The "oil-immersed amplifier and sound" designed by Qi Xiangshuo can adjust the treble and bass and check the oil temperature at any time after connecting to the Bluetooth of the mobile phone.

A four-wheeled motorcycle in front of Qi Xiangshuo's house has become the focus of attention of the villagers for days.

This motorcycle is called a four-wheeled "mountain motorcycle" and it was converted in October 2020 over a period of 15 days.

Unlike traditional vehicles, the motorcycle has one wheel on the front and three wheels on the back.

"The roads in the village have high slopes and potholes. Ordinary tricycles tend to roll over when turning, so I improved the tricycle." Qi Xiangshuo said that he also wanted to install a windshield on the motorcycle to make it more practical. some.