FIFA, Animal Crossing, Call of Duty: what are the best-selling video games in 2020?

The Syndicate of Leisure Software Publishers on Wednesday published the Top 20 best-selling video games in France in 2020. If &amp; quot; FIFA 21 &amp; quot; officially takes first place in the ranking, it is not necessarily the best-selling. `` Animal Crossing: New Horizons '', star of the first containment, is indeed disputing the unofficial title of the most popular game. 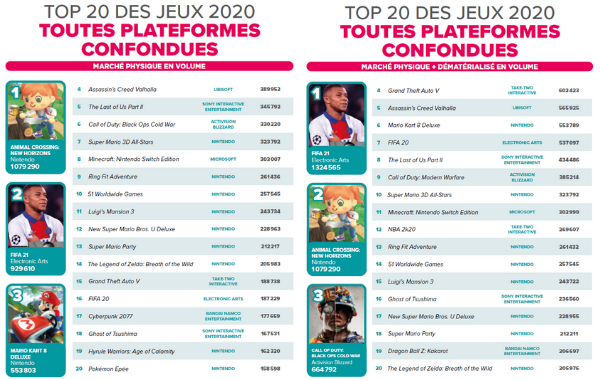 The Syndicate of leisure software publishers on Wednesday published the Top 20 best-selling video games in France in 2020. If "FIFA 21" officially takes first place in the ranking, it is not necessarily the best-selling.

"Animal Crossing: New Horizons", star of the first confinement, is indeed disputing the unofficial title of the most popular game.

The time has come to take stock for the year 2020 of video games.

All is well for the sector with a turnover of 5.3 billion euros, up 11% over one year.

Some 36 million French people play video games at least occasionally and for the first time in history, there are more female gamers (51%) than male gamers (49%).

The smartphone remains the preferred device for

Above all, we know the best-selling in 2020, with some surprises in the ranking ...

Battle at the top between

the best-selling game of the year with 1.3 million copies.

This figure, which takes into account physical and dematerialized sales, is actually quite low for the football simulation which takes first place in the SELL ranking each year.

Indeed, if we stick to physical sales only,

This is the first time that the famous license does not exceed one million boxes.

Released in September, FIFA 21 suffered from the second lockdown but remains close to its usual level thanks to dematerialized sales.

Released in March, the last episode of this "small" Nintendo franchise has experienced an extraordinary boom thanks to lockdowns.

Note that this figure only takes into account physical sales because Nintendo does not communicate its dematerialized sales.

It should therefore be noted that, on this format,

Globally, Nintendo has specified that 50% of sales come from its online store.

We can therefore risk that

On the third step of the podium, we find another juggernaut:

The last episode of the shooting game license is doing more than well with 660,000 copies sold in two months since it was released in November.

France manages to place a production in the Top 5 with

The rest of the Top 20 established by SELL also has some surprises in store.

In the midst of the blockbusters, more or less recent, that are

The Last of Us Part II

, two "small" games have benefited from a "confinement effect":

, a collection of dozens of board games in virtual version.