“Should the Bundeswehr be equipped with nuclear weapons?” Chancellor Adenauer was asked in 1957. The Germans reacted with horror. Germany's commitment not to manufacture nuclear weapons was interpreted by his cabinet willingly. 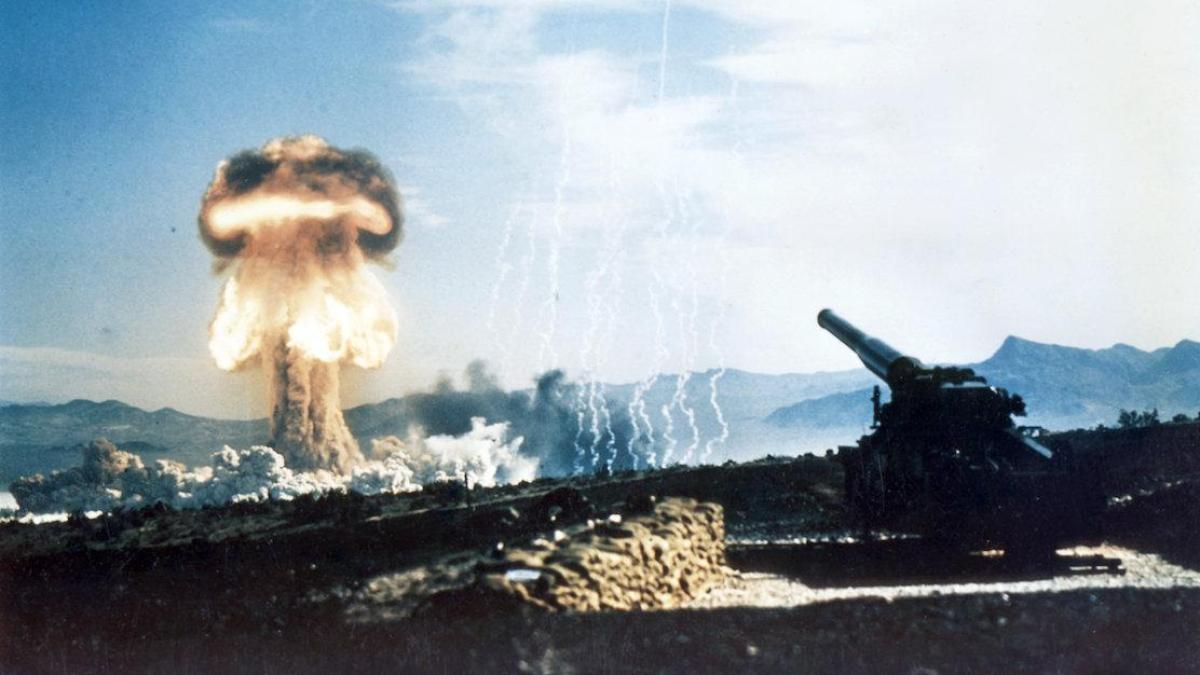 The Federal Chancellor obviously welcomed the question: “In your opinion, should the Bundeswehr be equipped with nuclear weapons?” Asked a journalist at an official press conference in Bonn on April 5, 1957.

Konrad Adenauer replied: “You should differentiate between tactical and large nuclear weapons.

The tactical weapons are nothing more than the advancement of the artillery.

Of course we can't do without it. "

The German public, at least large parts of it, reacted with pure horror.

Did the head of government of the Federal Republic of Germany, not even eight years old, actually plan to equip the heavily controversial Bundeswehr with weapons of mass destruction?

They would refuse to participate in a German nuclear weapons program.

That was involuntarily weird.

Because at least six of the signatories, above all Werner Heisenberg and Carl-Friedrich von Weizsäcker, had worked voluntarily and with full commitment in the “Uranverein”, the nuclear project of the German Army Weapons Office during World War II, a good dozen years earlier.

What they had secretly been prepared to do for Hitler, they now denied publicly to the democratic federal government.

No wonder that Adenauer took this protest little seriously.

Only in retrospect has the somewhat embarrassing declaration of the “Göttingen 18” supposedly become a document of civic responsibility of scientists.

But how did the Chancellor's statement at the press conference come about?

Internally, the Federal Government probably first discussed the issue of nuclear armament for the newly established Bundeswehr on September 19, 1956.

According to the protocol, Adenauer said: “Germany cannot remain an atomic protectorate.” A good two weeks later, he announced that he wanted “to be able to manufacture nuclear weapons himself via Euratom as quickly as possible”.

That was premature, because at that time there were only two nuclear powers in the West, the USA and Great Britain, which, however, had only detonated a single atomic bomb.

And in 1957 there were exactly 79 atomic shells, namely of the American type W-9 for the 28-centimeter howitzer.

Another specimen was tested on May 25, 1953 at the US nuclear test site in Nevada.

Up until then, the United States had not indicated at all that it was ready or wished to share its nuclear deterrent capacity with other states.

The only exception was Great Britain, which was given preferential treatment in the course of the “special relationship”.

Adenauer did not trust NATO

Adenauer did not trust the global promise of NATO in general and the USA in particular to open its nuclear umbrella over the Federal Republic.

Would the government in Washington actually react atomically in the event of a Soviet attack on West Germany - in view of the danger that the USSR could then attack American cities with its primitive but effective ICBMs across the Pole?

When the British government cut its defense budget sharply in the spring of 1957 and shortly afterwards detonated its first own hydrogen bomb as a test, Adenauer's concerns grew: the two western nuclear powers could be satisfied with even being safe from Soviet attacks through efficient deterrence.

Would you still care about the fate of the rest of Europe up to the Elbe?

Adenauer openly addressed his concerns to US Secretary of State John Foster Dulles.

But such confessions were not enough for him, he took action.

John J. McCloy, the only US politician he really trusted, said on November 19, 1957 on the subject of nuclear weapons: "France, Italy and Germany want to take positive steps and not just expect everything from the United States."

In fact, as early as February 1957, almost two months before his answer at the press conference, the Chancellor had spoken to the then French Prime Minister Guy Mollet about his distrust of Great Britain and the USA.

The socialist, who got on very well with Adenauer from the Rhineland, replied: "Then we must have nuclear weapons in five years."

However, this faced several problems.

West German scientists were undoubtedly qualified to design their own nuclear weapons;

There were also nuclear facilities that could be expanded to produce the necessary fissile material.

In 1954, however, the Federal Republic of Germany had made a binding international law commitment not to manufacture any nuclear weapons.

Franz Josef Strauss, Adenauer's young and dynamic defense minister, however, had an idea: That would only mean that the weapons should not be assembled in Germany.

Development work, on the other hand, can be carried out, as can the production of highly enriched uranium or plutonium.

In December 1957, according to the notes of Adenauer's confidante Herbert Blankenhorn, the German delegation demanded that "the principle of equal defense options must be ensured for all" on all questions relating to nuclear armament.

In the words of the historian Henning Köhler, author of what is probably the best Adenauer biography, this was a “clear statement against the American idea of ​​a two-class alliance”.

At the end of March 1958, the Bundestag debated the government's nuclear weapons plans for four days.

Adenauer portrayed it as if NATO were exerting pressure to get the Federal Republic of Germany to agree to nuclear armament.

Strauss assured that it was not about German nuclear weapons, but "units of all European allies subordinate to NATO".

Another idiosyncratic representation of reality.

Helmut Schmidt, the young defense expert of the SPD, countered: "When you talk about NATO units, you mean atomic bombs for the Bundeswehr." Obviously, the Hamburg MP was well informed from NATO circles.

Adenauer and Strauss are concerned with "military power, nothing but power and power for its own sake".

That Schmidt himself believed in it is rather unlikely, judges Köhler.

But the defense policy expert knew how to torment the CDU / CSU, and did so with "arrogant calm and polished polemics" - those qualities that earned him the nickname "Schmidt-Schnauze".

The federal government was finally able, thanks to the absolute majority of the CDU / CSU and with the support of other members of the bourgeoisie, to get their motion through.

After that, the Bundeswehr was allowed to prepare for nuclear weapons in the future.

However, it remained that American short-range missiles were purchased with German tax money, and jet jets of the Bundeswehr and howitzers were retrofitted with the technology for the use of nuclear weapons.

The USA reserved the right to dispose of nuclear weapons.

This article was first published in 2018.