Released in 2013 for the Wii U and victim of the unpopularity of this console, "Super Mario 3D World" benefits from a port on the Nintendo Switch at the beginning of the year 2021. A second life deserved for this very colorful title, embellished for the occasion of a "game in the game", "Bowser's Fury", which alone justifies diving back into this umpteenth adventure of the famous plumber. 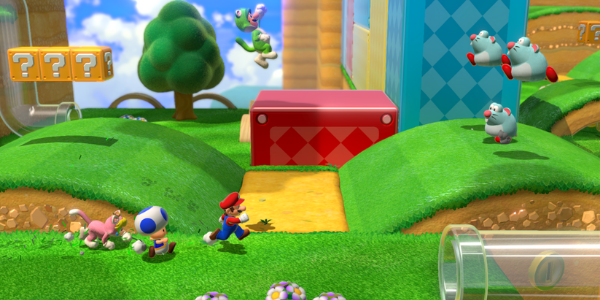 Released in 2013 on the Wii U and victim of the unpopularity of this console, "Super Mario 3D World" benefits from a port on the Nintendo Switch at the beginning of the year 2021. A second life deserved for this very colorful title , embellished for the occasion with a "game within the game", "Bowser's Fury", which in itself justifies diving into this umpteenth adventure of the famous plumber.

Mario, it's a bit like Sunday chicken: we know it by heart, we don't necessarily want to eat it at first, but we still don't end up enjoying a piece of it again.

So it is with

, umpteenth video game featuring the most famous plumber in the world (there are more than 200 titles involving Mario!).

Just released on the Switch, it is not, in reality, a new game strictly speaking but a port of the one released in 2013 on the Wii U, Nintendo's previous console, with very relative success. .

A welcome second chance for this very pleasant opus, boosted by

, a new game mode that is worth the detour.

starts out like most little hero games, with a bad turn from Bowser.

Mario's nemesis has kidnapped the princesses of the fairy kingdom so, neither one nor two, the plumber dives into a pipe to rescue the captives and punish the ugly kidnapper.

Classic beginnings for an equally classic opus in form, a platform game in the purest tradition of Nintendo.

Mario has to go through a multitude of fairly short levels, grouped into six worlds.

You have to pass all the levels, while unearthing as many hidden stars as possible, to advance to the boss fight that punctuates each of the worlds and move on to the next.

Far from being innovative, this

Once launched, difficult to win.

We have a bit of the impression of being in a 2.0 amusement park, each level is different from the others with a refreshing originality.

Besides the traditional environments (ice, lava, desert, jungle…), we marvel when Mario crosses levels inspired by the circus, magic, pastry… It's beautiful, it's round, it's colorful and the graphics, enhanced for this new version, showcase the overflowing imagination of the Nintendo teams.

The main novelty in the game is a new cat costume for Mario.

It is added to the usual transformations of the plumber (tanuki, boomerang, fireball) to diversify the gameplay.

In feline mode, he can attack enemies with his claws and climb walls.

Not revolutionary, but it allows you to exploit 3D a little more and take advantage of the verticality of the levels.

The adventure would be almost perfect if it weren't for those sometimes frustrating camera worries.

The side view, even if it sometimes moves behind Mario, generates a lot of missed jumps or badly anticipated enemies.

By the way, we don't talk about music in Mario games.

The care taken here in the soundtrack is quite remarkable, with a main jazzy theme that swings and atmospheres specific to each level always very worked and above all never boring.

is playable solo, it is much more fun with several, up to four players on the same console.

Each plays a character (Luigi, Peach and Toad support Mario) and the levels are done in cooperation.

The icing on this already rich cake, the port on Switch is accompanied by a new game mode, in reality a "game in the game":

, it offers a slightly different adventure since here, Mario evolves in an open world, a single and huge level in the shape of a lake with multiple islets.

Become gigantic and evil, Bowser has covered the environment with a black and viscous mud that must be removed by turning on headlights.

Each lighthouse contains five events (fighting, climbing, running, enigma, etc.) that must be passed to obtain feline stars in order to light the headlights. Periodically, Bowser emerges from the mud to cause a fight. Mario then has the opportunity to switch from the little cat to the giant lion to fight on an equal footing with his enemy. The whole forms an adventure in one piece, without loading time, lasting 4 to 8 hours very honest. It is therefore a real game that Nintendo gives us, a pleasant bonus and which in itself justifies buying the port of