Perseverance takes the first color photographs of the surface of Mars

The robotic vehicle Perseverance, which landed this Thursday in the Jezero crater of Mars, took "the first color photograph" of the surface of the red planet released this Friday. 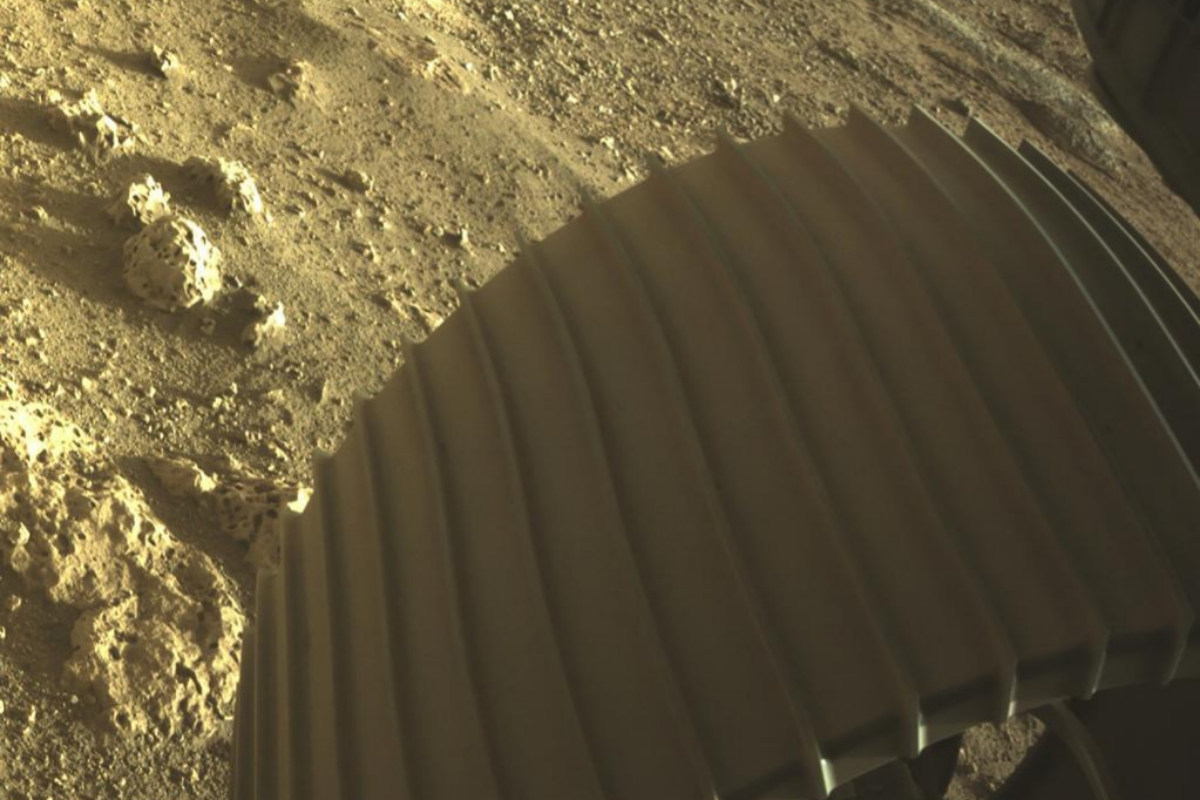 The robotic vehicle Perseverance, which landed this Thursday in the Jezero crater of Mars, took

The high-resolution image was taken

just before the dangerous landing

of Perseverance, a robot that will spend at least two years in Jezero crater, examining the planet's geology, collecting samples and looking for signs of ancient life.

The photograph shows the surface of the red planet with

in which the shadow of a part of the 'rover' and the horizon can be seen.

"This shot of a camera on my 'jetpack' captures me in the air, just before my wheels landed," says Perseverance on his Twitter account.

"The moment my team dreamed of for years is now a reality," he

It is the same image released Thursday in black and white, but now in its color version.

NASA also showed at a press conference another image, with yellow tones, of the Martian soil, where the terrain is appreciated and especially some

rocks "with many holes" that "are not common"

One of the Perseverance wheels with some pebbles with holes in the back.NASA

NASA experts pointed out that these small rocks could be volcanic.

They added that what has been seen so far in the images is quite flat, which, they said, was a great relief for Perseverance's dangerous landing maneuver, which on Thursday had to

reduce the speed of 20,000 kilometers per hour to zero in just seven minutes

The first photos were also taken with the transparent protective covers that the space vehicle's cameras still have, a total of 25, including two installed on the small Ingenuity helicopter, an aircraft weighing less than two kilos.

The photos, the scientists pointed out, come from the so-called

that seek to avoid dangers during the movement of the vehicle.

, chief engineer of Perseverance, explained today that once the helicopter is operational, which is expected to be the first to make a flight on another planet, it will be able to take photos and videos of the space vehicle, and vice versa.

The Perseverance, which is still standing where it landed on Thursday, with its rear facing what is supposed to be the delta of a river, will have the task of gradually testing its instruments over the next few days.

For now, scientists are analyzing the first images of the delta that they hope will be rich in sediment and possibly volcanic rocks.

The Jezero crater was chosen by NASA because it

and therefore can be rich in fossil microorganisms.

NASA further noted that the Perseverance's two microphones have not yet recorded the sounds of Mars, but that they will soon.