"Come to the God of Wealth" on the fifth day, come and see this very "rich" exhibition! 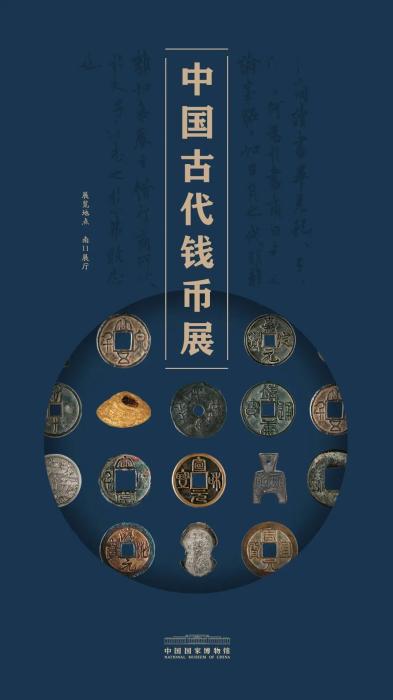 On the fifth day of the first lunar month, according to Chinese traditional festival customs, it is the day of "accepting the god of wealth".

According to folklore, the fifth day of the first month is the birthday of the god of wealth.

As a result, the shops opened, and golden gongs and firecrackers and sacrifices were made early in the morning to welcome the god of wealth.

Today, the reporter went to the National Museum of China to see a very "money" exhibition.

"Ancient Chinese Coins Exhibition" poster, this is the latest permanent exhibition of the National Museum.

Do you know why currency is called "money"?

During the Shang and Zhou Dynasties, the farm tool shovel was called "money."

During the Eastern Zhou Dynasty, the farm tool shovel evolved into the currency in circulation in the Central Plains, namely cloth currency, so people called this currency "money."

Residents in the Central Plains use farming as their main way of life, so the shovel, hoes and other agricultural tools used for farming have become important and necessary items for every household.

The life mode of settled agriculture in the Central Plains provided the possibility for farm tools to become currency in circulation.

There is an original cloth coin from the Western Zhou Dynasty in the exhibition hall that is worth seeing. This cloth coin retains more of the prototype of a farm tool shovel. It has a large body and a shovel handle hole, which is in the process of evolving from a practical object to a coin.

The original cloth coin of the Western Zhou Dynasty, shaped like a shovel, is also the source of the name "money".

Here you can also see the earliest metal coinage in human history-the copper imitation shell that appeared in the late Shang Dynasty, about four centuries earlier than the earliest coin in the West, the "Lydia Gold Coin".

How much is five baht?

Approximately equivalent to a five-point coin

The weight of the five baht coins found in the Western Han Dynasty is mainly between 3.5 grams and 4 grams.

The Western Han Dynasty inherited the Qin system, and copper coins were coined in units of two and baht, and continued to implement a disciplined currency system.

In the fifth year of Yuanshou, Emperor Wu of the Western Han Dynasty (118 BC), the currency system was reformed and the first five baht coins were minted.

In the fourth year of Yuanding (113 years ago), the county government was prohibited from making money, and only the three officials of Shanglin were allowed to make money.

Since then, my country's currency casting rights and issuance rights have been completely returned to the central government.

The five-baht coin is a coin that has been used for a long time and has a relatively moderate weight in the history of my country. It is one of the longest circulating coin forms in ancient my country. It was in circulation until the fourth year of Wude of Tang Gaozu (621). Thirty-four years.

Is the golden horseshoe gold currency?

The excavation of the tomb of Jiangxi Haihunhou made more people know about horseshoe gold.

The "Han Shu·Wu Di Ji" records that in the second year of Taishi (95 years ago), Emperor Wu went out for inspections. When he climbed the Xilong Plateau, he received Bailin, he saw Tianma in Wowashui, and found gold in Taishan. Emperor Wu believed this The three things are signs of auspiciousness, so the original square or round cake-shaped gold was recast into lintoe gold and horseshoe gold.

Horseshoe gold and Linzhi gold stopped casting after Emperor Wu. They are rare and precious.

It still needs to be weighed during specific use, so it is also a weighing currency.

During the Song Dynasty, precious metals became more and more important in the circulation field, and rewards, military expenses, disaster relief, taxes, and official salaries were often converted into silver.

The most common form of silver is collar or ingot.

There are many words on the surface of the ingot to record the place name, the name of the craftsman, the shop number, as well as the year, purpose, weight, and officials.

More than 2,000 exhibits build a general history of coins

When you walk through the Progress Hall, you can see that the dome of the Prologue Hall is shaped like an ancient coin.

Do you recognize these four words?

Yes, it is "Yongtong Wanguo" from the Northern Zhou Dynasty.

The emperor Yuwen of the Northern Zhou Dynasty explained that Yongtong Wanguo was cast in the first year of the elephant (579). It was worthless and the cast was excellent, parallel to the five elements.

Although the coins of the Northern Zhou Dynasty were exquisitely crafted, they were all large coins of false value. Later, due to weight loss, private coining was rampant and the people were not happy to use them, which created conditions for Yang Jian to usurp the throne.

The dome of the prologue hall is taken from the "Yongtong Wanguo" copper coin of the Northern Zhou Dynasty.

The coins in the exhibition range from primitive seashells to early knives and coins, to square-hole round coins that lasted for two thousand years, to the machine-made copper and silver dollars at the end of the Qing Dynasty. The heritage is clear and the variety is prosperous; the existing forms are different. There are also various kinds of paper money since the Yuan Dynasty; there are currency in circulation, as well as treasury money, palace money, support money, zodiac money, triumphant money, game money, etc. that reflect ancient Chinese folk culture; both reflect ancient Chinese superb The representative coins of calligraphy art also have various models, mother coins and banknotes that reflect the development level of ancient coinage technology.

It is reported that the "Ancient Chinese Coins Exhibition" being held at the National Museum of China is a new permanent exhibition.

The exhibition selected more than 1,800 treasures from more than 200,000 coins in the collection, supplemented by more than 200 other types of cultural relics, presenting a unique ancient Chinese coin culture.

Ancient Chinese coins, which have lasted for thousands of years, are unique in the history of world coins. At the same time, they have had a profound impact on the currency use of neighboring countries and regions.