Weather: Six people freed from the suspension railway in Wuppertal

The railway has discontinued long-distance traffic on several routes, in Münster there are no more buses "until further notice", in Wuppertal the suspension railway has stopped. An overview of the developments towards the onset of winter in northern and western Germany. 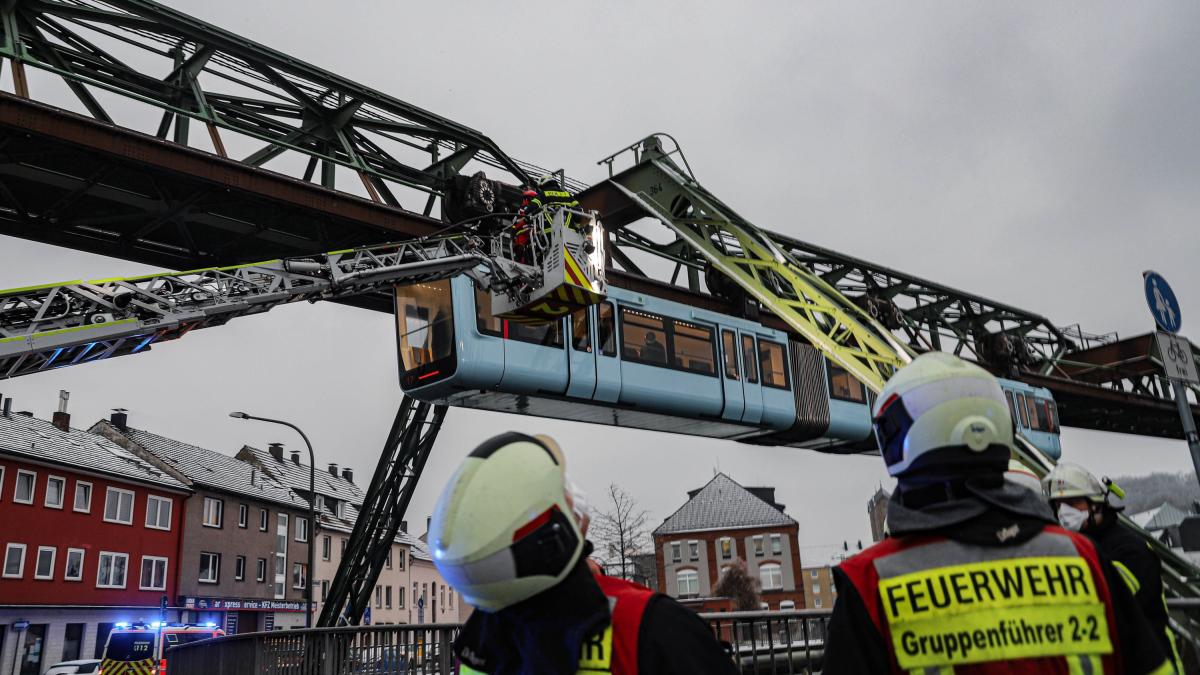 Up to 32 centimeters of fresh snow, gusts of wind of up to 80 kilometers per hour and meter-high drifts: The expected blizzard hit central Germany in particular - and it was not over on Sunday.

In long-distance rail traffic, there were major restrictions.

Snow mountains in East Westphalia, freezing rain in the Ruhr area: the heavy onset of winter brought the clearance services to their limits.

The police had to block highways as smooth as glass, there were hundreds of accidents, and trains were canceled due to iced overhead lines.

Buses stood still in many places.

Cars got stuck in deep drifts of snow.

The Leipzig / Halle region is also not served by long-distance traffic.

Long-distance traffic between Germany and the Netherlands was discontinued.

The German weather service in Offenbach emphasized in the morning that the snow storm was not over yet.

Five to ten centimeters of snow, locally also up to 20 centimeters, must still be expected over the course of Sunday.

The wind continues with gusts of up to 70 kilometers per hour.

“That was definitely not the case.

We'll have to wait until tonight with that. "

The north of North Rhine-Westphalia, southern Lower Saxony, northern Thuringia and Saxony-Anhalt are particularly affected in the next few hours.

During the night it will snow in north Bavaria, south Thuringia and south-west Saxony.

The meteorologists expect ten to 25 centimeters of fresh snow in twelve hours.

"But without big winds."

In North Rhine-Westphalia and Lower Saxony there were also problems in regional traffic - as in Thuringia, Saxony-Anhalt and Saxony.

The situation at the train stations is calm.

Most of the people followed the recommendation of the German Weather Service and stayed at home.

In NRW, several cities and districts completely stopped bus traffic - such as Münster and Dortmund.

A circus tent collapsed in Hagen due to the large amount of snow.

The seven horses, two camels, two goats and two llamas that were in the tent were unharmed, according to the police.

Problems in regional traffic had already been reported in NRW and Lower Saxony.

The first problems arose especially in the Ruhr area.

That concerns about the important route between Duisburg and Essen.

The regional trains between Münster and Recklinghausen and the S-Bahn between Dortmund and Hagen could no longer run or had to be diverted due to a catenary fault.

The private Eurobahn also reported several train cancellations due to the onset of winter, especially around Münster, Bielefeld and Paderborn.

The city of Münster completely stopped its bus services on Sunday morning.

The decision applies "until further notice" - the weather will be closely monitored.

In addition, a driving ban for trucks was imposed in the city.

In Münster, 20 to 30 centimeters of snow had fallen within a short time on Sunday night.

Emergency services have freed six people from a suspension railway in Wuppertal.

The train could no longer run due to the icy weather and has stopped, said a spokesman for the fire department on Sunday.

The passengers were freed from lofty heights with turntable ladders.

The speaker could not say when the train would run again.

"In Thuringia, Saxony-Anhalt and Saxony, the train traffic has been affected by heavy snowfall," said the railway.

The situation at the train stations is calm.

Most of the people followed the recommendation of the German Weather Service and stayed at home.

In North Rhine-Westphalia there have been 222 accidents due to the weather since Saturday afternoon, the police said early on Sunday morning.

Two people were seriously injured and 26 were slightly injured.

The property damage amounts to around one million euros.

The WDR had previously reported.

The winter services in North Rhine-Westphalia were set up for one of the largest missions in years.

Authorities had appealed that if at all necessary, drivers should only drive off with a full tank, winter tires and blankets to warm up.

People without a permanent residence are particularly exposed to the cold without protection.

During the freezing winter night, emergency services in North Rhine-Westphalia, for example, approached numerous homeless people and brought them to warm accommodation.

A large homeless camp was also cleared in Berlin, which, however, also met with criticism.

Left groups called for a protest on Saturday and demanded that the former residents of the camp be allowed to return there.

Correction: In an earlier version it was said that the train service between Hamburg and Berlin had been stopped.

It is true that there are restrictions on the route and that some trips are canceled.