Chinanews client, Beijing, February 3 (Reporter Ren Siyu) On February 3, relatives and friends of musician Zhao Yingjun issued an obituary, saying that Zhao Yingjun's treatment was invalid due to illness. He died in Beijing at 14:33 on February 3, 2021, all year long. 43 years old.   Zhao Yingjun has composed songs for many films such as "Detective Chinatown", "Pancake Man" and "Hong Kong Joke" 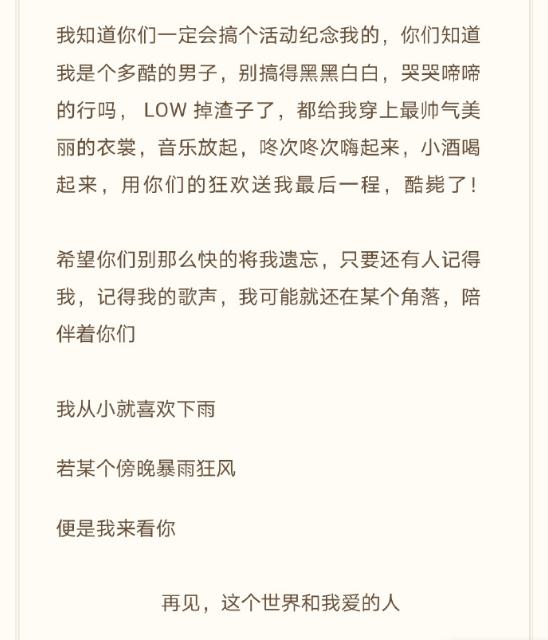 Chinanews client, Beijing, February 3 (Reporter Ren Siyu) On February 3, relatives and friends of musician Zhao Yingjun issued an obituary, saying that Zhao Yingjun's treatment was invalid due to illness. He died in Beijing at 14:33 on February 3, 2021, all year long. 43 years old.

Zhao Yingjun has composed songs for many films such as "Detective Chinatown", "Pancake Man" and "Hong Kong Joke".

On the evening of the 3rd, Zhao Yingjun’s Weibo was updated again. In the last essay, Zhao Yingjun said that after more than two years of fighting, he still lost to cancer. Although his 43-year life was a little shorter, it was still very exciting. I am also reluctant to leave, and I hope everyone will not forget him so quickly.

"Use your carnival to send me the last ride, it's so cool!" "As long as someone remembers me and remembers my singing, I may still be in a corner, with you."

From bank clerk to musician

Afro heads, happy faces, and the creation of many hit songs for the movie are the deepest impressions of Zhao Yingjun.

Zhao Yingjun, originally named Zhao Jian, was born in Fushun City, Liaoning Province in 1977. Before he became a singer, his main business was finance. "Most of my family members are in banks. Their dream of me since childhood is to become a bank employee in the future." After graduation, following the wishes of his family, he went to the bank for four years.

But in fact, when he was at school, he liked to play the guitar, and he also started a band at work.

Later, Zhao Yingjun resigned and became a "North Drifter". By chance, he came to Shanghai to participate in the "My Type My Show". Among the contestants that year were singers such as Zhang Jie and Yuan Chengjie.

Although he participated in the audition and training, Zhao Yingjun finally retired on the grounds that he did not meet the contract requirements at the age of 25 and a half. Later, the show team found Zhao Yingjun to cooperate and invited him to be a member of the backstage: "The first I-type show Except for the band accompaniment, I bought the accompaniment of every singer and cut it out."

At the beginning of the second session, Zhao Yingjun has become one of the judges of the "My Type My Show" audition, and has selected singers such as Qi Wei and Wang Xiaokun.

When Qi Wei sent her mourning on Weibo, she referred to Zhao Yingjun as "My Bole".

In 2005, Zhao Jian released a song "Excitement 2005" on the Internet. This song composed of 23 popular songs quickly became popular. He took Zhao Yingjun, a rich man from the sketch "I Want to Have a Home" The name of Xigan is well known by everyone.

Later, a movie found Zhao Yingjun as the number one male. This role needs to have an Afro. In the end, the movie was not made for various reasons, but the Afro was retained, which became one of Zhao Yingjun's "signs".

Zhao Yingjun once said in an interview, "When I grow up, I find that I love two things, one is movies, the other is music." These big-screen electrocution performances and the friends I met also gave Zhao Yingjun more opportunities for music.

When Xu Zheng was filming "Taiyu", he found Zhao Yingjun to create an episode for the film. Zhao Yingjun once said that Xu Zheng was a little nervous at the time, "Because I don't look like a person doing this job. , But in fact I am pretty reliable. He discovered my ability to write music for movies, which is my Bole."

At the end of the year, his performance of "Unexpectedly" was released, and the ending song "The King Called Me to Patroll the Mountains" went viral on the streets and alleys, and once boarded the stage of various David's evening parties.

That year, he also composed the song "Chinatown" for the movie "Detective Chinatown" and played a guest role in it.

In 2017, Yingjun Zhao once again teamed up with Dapeng to create "All Selection C" for the movie "Sewing Machine Band", and also produced the theme song "The Kingdom of Daughters" for the movie "Journey to the West".

At the end of 2017, Zhao Yingjun held his first concert in the 13th year of his debut at Beijing Beizhan Theater. Many celebrities and friends came to help out.

The live album cover of "Zhao Yingjun "Back to Tomorrow" Beijing Concert".

Compared with ordinary creation, film music is more like a "propositional composition." Zhao Yingjun once said that its biggest feature is that it has a lot of constraints.

But there will also be certain rules, "After mixing for a long time, it is easy to know what the main points of the movie are. The soundtrack also includes some technical problems of music, but in summary, it is also necessary to deduct questions and catch the eye."

He likened himself to a "cook". Dapeng also said in an interview that he was particularly relieved to let Zhao Yingjun make a song: "Basically, he has not rejected the manuscript, and has not undergone any revisions."

"Hong Kong 囧", "Pancake Man", "Chinatown Detective", "Hot Pot Hero", "Beneficiary", "Send You A Little Red Flower"... Zhao Yingjun has created promotion songs and theme songs for many domestic films, and because of these films Both achieved good box office results, and he was once known as the "box office mascot".

Zhao Yingjun's Weibo profile wrote, "Not only is the actor who writes the best songs among the host screenwriters, he is also the only singer who has worked as a bank clerk among the radio DJs who can do film soundtracks."

Regarding these labels, he said, "I care about all of them": "I just want to do a lot of things, try many ways of thinking, and have many different kinds of life, isn't that good."

"What you want to do, what you should do, and what you can do are three things. I work hard to turn these three things into one thing. It takes a lot of effort, time, waiting and looking for opportunities. I’m afraid I’m living for this. Otherwise, what’s the difference between every day and the walking dead.” He once said.

Zhao Yingjun's "Sing in the Name of Movie" album cover.

"Send you a little red flower"

Xu Zheng shared the circle of friends that Zhao Yingjun posted on New Year's Day this year: "The world is always like this. As long as you firmly love life, insist on learning, keep justice in your heart, and protect the people you love, what year, love you! "

Before his death, Zhao Yingjun had never revealed his illness in public.

In 2020, "One Song, One Story, Re-singing Projects of Some Works by Zhao Yingjun" will be launched as a relay. Han Hong, Eason Chan, Zhang Jingying, Wang Yuan, Xiao Jingteng, Xue Zhiqian, Zhang Xinzhe and many other singers will participate in the re-sing of "To The Youth We Will Die", "Songs That Doesn't Exist in the World", "Live Like Xiaoqiang" and other songs.

Zhao Yingjun commented that Dapeng sang "Ten Thousand Thousands", "After hearing about my re-singing plan, Dapeng chose this song firmly and quickly. It is not so much like it, it is fate... The funny lines at the beginning of the song are deceptive. Who would have thought that he would sing this song so restrained, gentle, full of fatalism, and each sentence is full of feelings and stories... Listening to Xiaowen, Dapeng recorded it in the studio I choked for a few times, I know he loves this song, loves those memories, and loves me too!"

"Fang De Yan" is the last song of the re-singing project, and it is also the "most special song" in Zhao Yingjun's mouth. This song was completed by Han Hong in the recording studio "One Mirror to the End": "Because I want the most sincere The emotional presentation of the whole song was done in one go. My sister sang it in tears. I was so touched after listening to it, thank you sister!"

Director Lu Zhengyu said that in the spring of 2019, he knew that Zhao Yingjun was ill. After January this year, Zhao Yingjun refused to visit from friends: "Don't come to see me, don't forget me." Zhang Jingying said in the eulogy, "My friend said, you are finished eating "Send You A Little Red Flower" recorded at home by Pain Yao.

On December 15th, he said in his self-report when the new song was launched, “This kind of creative experience is very precious. Whenever you look at it, you will remember why a work looks like this. It looks like life, luck, or fate. When I look back, everything is so beautiful, thank you for the music, thank you for the movie, I can keep it all!"

The lyrics of this song "Send You A Little Red Flower" has also become a farewell message missed by countless audiences:

Reward you to never forget me wherever you go

The white and snowy beach, the calm lake

Those real phantoms are my concern for you

Reward you to feel the struggle of every destiny

Who is it to squander the time? Who is the bitter hope?

This is not a question and does not require your answer"