"Post-80s" Hakka women open teahouses: a ray of homesickness and a ray of love 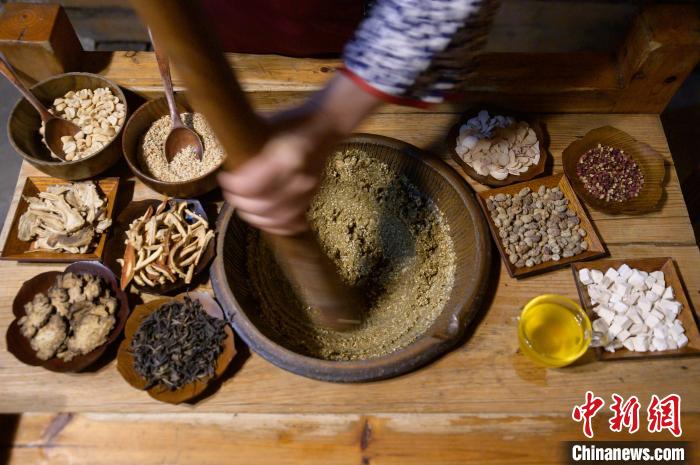 (New Year's visit to the grassroots) "Post-80s" Hakka women open teahouses: a touch of homesickness and a touch of love

As the precious wealth left by the Hakka people from the Central Plains to the south, Lei Cha is known as "one of the living fossils of Chinese tea culture."

According to historical records, Lei Cha was popular in the Central Plains as early as the Song Dynasty.

Among the rich and colorful food culture of the Hakka people, Lei Cha is the most representative delicacy. The preparation method is simple and elegant, which fully demonstrates the Hakka people's inheritance of the Han traditional culture.

"Go to the host, run to the west, drink Lei Cha, play haha, come and go and make family together." As the folk songs sing, in Fujian Sanming, Longyan and other areas where Hakkas live, hospitable Hakkas have always served guests with Leicha. , Whether it is a wedding celebration, or a visit by relatives and friends, please drink Lei Cha.

In Taining, Lei Cha has a thousand-year tradition.

Li Hua is a tea master in Taining County and runs the "Shangpinyuan" teahouse.

In the teahouse, the white peony, tuckahoe, Chuanqiong, angelica, tea, sesame and other raw materials were put into the beating bowl, and Li Hua gripped the beating stick and started grinding.

The beating sticks are regularly rotated along the inner wall of the beating bowl along the grooves, and the various raw materials are ground into powder in a short while.

Afterwards, Li Hua added water to the beating bowl and continued to grind. The fragrance of medicine, tea, and sesame was instantly overflowing, and the fragrance became stronger as the beating lasted.

A bowl of refreshing and delicious Leicha is thus made.

"You can add broth to make it, or you can add raw tea oil." Li Hua said with a smile, after the process of beating, the tea oil will become ripe.

The taste of meat tea is salty, the light salty taste, you don’t have to be afraid of being caught by drinking a few more bowls.

Li Hua was born in Dalong Township, Taining County, where most of the Hakka people live.

She recalled that when she was a child, she could only drink Lei Cha on happy occasions at home, or when there were distinguished guests visiting at home, or when mothers were urging breastfeeding.

"Since I was young, I like to drink Lei Cha. When my grandma and mother made Lei Cha, I watched it. Later, I would do it naturally."

The tea maker Li Hua used a spoon to scoop out the prepared Hakka tea.

As she grew older, she moved from the country to the county seat to work.

Thinking about the taste of that bowl of Leicha, Li Hua began planning to open Leicha.

Hakka tea is made.

In 2015, Li Hua found an old house with a history of two to three hundred years in Futang Lane and was deeply attracted by this antique courtyard.

"This is a good match for Lei Cha." Her Lei Tea House also took root in this old house.

According to Huang Xiaorong, deputy director of the Bureau of Culture, Sports and Tourism of Taining County, Taining Lei Cha uses raw materials such as tea, peanuts, sesame, tangerine peel, calamus, honeysuckle, licorice, etc. In addition to the traditional tea making technology and health functions, the bitterness or greasiness of folk tea is abandoned.

Li Hua is tasting the Hakka Lei tea he made.

In the ancient city of Taining, drinking a bowl of Leicha and listening to a section of the Meilin Opera, it is not interesting.

In Futang Alley, Shang Shudi has become one of the must-visit attractions for tourists from home and abroad when they come to Taining. Li Hua’s Lei Tea House is also popular among tourists.

At the beginning of last year, Li Hua was caught off guard by the sudden outbreak of new crown pneumonia.

It was not until April last year that Li Hua’s Lei Tea House opened for business. “Affected by the epidemic, tourists have decreased a lot, and turnover has also decreased compared with previous years.”

Now that the Spring Festival is approaching, Li Hua hopes that the epidemic will pass sooner and more foreign tourists will visit Taining.

"I also want to improve Lei Cha to suit the tastes of all kinds of people, so that more people can drink a bowl of Taining Lei Cha." (End)