"An unyielding patriot and a real citizen": how Vasily Lanovoy will be remembered

On January 28, People's Artist of the USSR Vasily Lanovoy died. At the beginning of the year, the 87-year-old theater and film actor was hospitalized with coronavirus. Friends, colleagues and admirers of the talent express their condolences in connection with his death. They remember Lanovoy as the personification of courage and nobility, an honest citizen, a legendary person and a great artist who was brilliant on stage and lived in earnest. 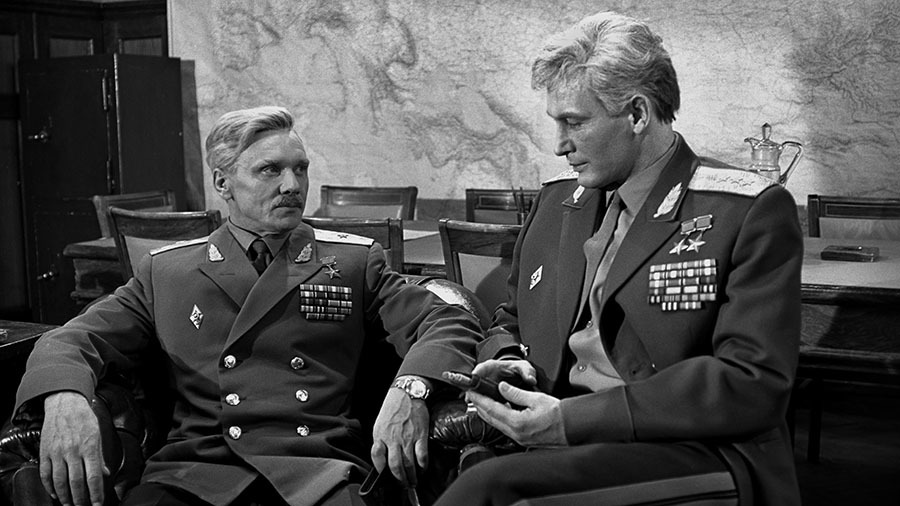 On Thursday, January 28, at the age of 88, People's Artist of the USSR Vasily Lanovoy died.

In early January, they, along with his wife, actress Irina Kupchenko, were hospitalized with coronavirus infection.

According to media reports, shortly before his death, Lanovoy was transferred to intensive care and connected to a ventilator.

Kirill Krok, director of the Yevgeny Vakhtangov State Academic Theater, in which Lanovoy served for over 60 years, confirmed these circumstances to the TV channel 360: "The reason is coronavirus."

Farewell to the actor will take place at the Vakhtangov Theater.

According to the press service of the institution, the date of farewell and funeral will be announced later.

"Actor of the Romantic Series"

Condolences over the death of the artist are expressed by his friends, colleagues and admirers of the talent.

“People's Artist of the USSR, luminary of the Vakhtangov Theater, the great citizen of his Fatherland Vasily Semyonovich Lanovoy passed away on January 28, 2021 at the age of 87 years.

He was and will remain the personification of Honor, Nobility, Dignity, Beauty, Courage.

Invincible in loyalty to their passions - human and civil.

This is probably what Shakespeare said about him: "Be true to yourself, then you will never change to others," write the actor's colleagues from the Vakhtangov Theater.

They recall that Vasily Lanovoy "lived contagiously, organically, victoriously" and never thought of himself outside the Vakhtangov Theater.

“This is undoubtedly one of the most talented actors of theater and cinema, but first of all this morning for some reason you think that on May 9, when our famous human, heartfelt regiment will march through the streets of Moscow, Vasily Lanovoy will not be in front ... This is a huge loss.

And now the words don't fit into a sentence that can express the level of loss that shocked us all.

Blessed memory of this great citizen, great artist and just a very dear person for us, ”said Valeria Gushchina, director of the Guild of Russian Film Actors, in a conversation with RT.

“He felt some kind of extraordinary responsibility to his teachers for the Vakhtangov school, of which he was the bearer.

Lanovoy was an actor in a romantic series - today there is almost an unclaimed role, but when Lanovoy appeared on the stage, it became absolutely justified and a necessary phenomenon, "the interlocutor of RT said.

Zaslavsky stressed that the actor performed on stage until the end of his life and continued to teach classes at the Boris Shchukin Theater Institute.

And when one or the other inspectors came, it was strange for them, when they found Lanovoy in the classroom studying with some student one-on-one, but this is the only way to transfer skills, ”added the rector of GITIS.

Russian President Vladimir Putin called Lanovoy's death a huge, irreplaceable loss and loss for everyone to whom the artist "generously gave his talent and breadth of soul, who were lucky enough to know personally, to be friends with this bright, strong, open person."

“Vasily Semyonovich was not only a popularly beloved artist, a legend of Russian cinema and his native Vakhtangov Theater.

In our memory, he will forever remain an unyielding patriot, a real citizen, for whom above all is Russia, its fate, history and future, ”the president added.

The official representative of the Russian Ministry of Foreign Affairs Maria Zakharova called the actor a real citizen: “Desperately honest, fighting with lies, giving all of himself to the Fatherland.

An example of civic courage.

His courageous and noble heroes became the idols of millions of viewers.

It is impossible to forget the images that he created in the cinema and in the theater ... My condolences to the family and friends of Vasily Semyonovich.

Writer, Deputy Head of the State Duma Committee on Culture Sergei Shargunov, in an interview with RIA Novosti, called Lanovoy a courageous and charismatic artist, a versatile talented person.

“He lived in earnest, and although he played brilliantly for decades, the main thing - in his feelings and experiences, in his love for the country - was not a game, but there was a deep power of seriousness,” Shargunov emphasized.

In the civil-patriotic movement "Immortal Regiment of Russia", co-chairman of the central headquarters of which was Lanovoy, they called the artist the personification of an entire era: in the cinema, in the country, in the life of everyone who was lucky to live at the same time with him.

“With one of his first roles as Pavka Korchagin in the film based on the novel by Nikolai Ostrovsky“ How the Steel Was Tempered ”, he literally burst into the lives of our fathers and mothers, grandparents, becoming the personification of indomitable willpower and courage.

His heroes of the films "Scarlet Sails", "Anna Karenina", "War and Peace" showed that Vasily Lanovoy is one of the most talented actors in the country.

His role in the film “Officers” is a charter of conscience for all Russian officers in serving the Motherland for all time, ”the authors of the obituary write.

People's Artist of the RSFSR Svetlana Nemolyaeva, in an interview with RT, noted that Lanovoy was a very close person to her.

“And although we did not meet with him either in the theater or in the cinema, we traveled a lot around the country ... He was an amazing person, he was a real, genuine patriot.

He loved his country very much.

And besides the enormous talent that he had, it is remarkable how he read poetry marvelously, he was an incredibly handsome man ... Handsome, noble in the highest concept of this word, "Nemolyaeva noted.

She added that Lanovoy was such a figure "who is with us everywhere, in every corner of the country."

“Now are some very terrible times, because a generation is leaving.

So many people have left in this short time, one after another, and this is terribly sad, ”concluded the actress.

Actress Nonna Grishaeva admitted that she believed that an artist who was sick with coronavirus would be able to overcome him.

“Vasily Semyonovich is such a fortitude person ... This is a person who possessed an incredible talent and fortitude.

For some reason I thought that he would win, ”she told 5-tv.ru.

“Vasily Semenovich is an era!

In the history of Soviet cinema, in our Russian culture.

A huge loss for our culture ... A man who played many roles in films that shaped the world outlook of tens of millions of Soviet and already Russian citizens

The director added that the artist will forever remain in people's memory thanks to films that will be reviewed by "new and new generations of our viewers."

Vasily Semyonovich Lanovoy was born on January 16, 1934 in Moscow, into a family of peasants from the Odessa region.

The beginning of the Great Patriotic War found him in Ukraine, where he came to visit his grandparents.

The future artist returned to the capital only in 1944.

In Moscow, Lanovoy began attending the theatrical studio of the ZIL Palace of Culture, after which he received first prize at the All-Union competition of self-made theaters.

After graduating from school, the young man entered the Faculty of Journalism of Moscow State University, but did not study there for a year, having made a choice in favor of the acting faculty of the Boris Shchukin Theater School.

In his student years, Vasily Lanovoy made his film debut.

He played a central role in the film "Certificate of Maturity" by Tatiana Lukashevich.

In the mid-1950s, the artist also played Pavel Korchagin in the film of the same name by Alexander Alov and Vladimir Naumov (she immediately brought him wide fame) and appeared in the film "Three hundred years ago ...".

In 1957 Lanovoy joined the troupe of the Yevgeny Vakhtangov Theater.

In the early years on stage, the artist participated in such productions as "Eternal Glory", "The Idiot" and "Hamlet".

The role of Prince Calaf in the play "Princess Turandot" presented in 1963 became a landmark for him.

In subsequent years, the actor had a chance to play Caesar (Antony and Cleopatra), Protasov (Children of the Sun), Marquis Padetrua (Cinderella), Trotsky (Peace of Brest), Alexei in Alexei Berezhny, Bernard Shaw ( Sweet Liar "), King Henry II (" The Lion in Winter ") and many others.

In the Vakhtangov Theater, the artist served until the end of his life.

He also took part in several performances of the current repertoire - "Dedication to Eve" and "Last Moons".

According to the director of the theater, Kirill Krok, these performances will be removed from the repertoire, since they were staged specifically for Lanovoy.

The artist also took part in the production of "The Crystal Ball in honor of Yevgeny Vakhtangov", which premiered on December 14, 2020.

The funds raised within the framework of this project will go to the creation of the Vakhtangov house-museum in the director's homeland in Vladikavkaz.

In parallel with playing in the theater, Vasily Lanovoy continued to act in films.

In the 1960s and 1970s, he played roles in the films Scarlet Sails, War and Peace, I Am Going Into a Thunderstorm, Anna Karenina, Solaris, Officers, Seventeen Moments of Spring, Days of the Turbins ”and many others.

Since the 1980s, the actor has become less likely to appear on the screen.

Among the most notable of his later works - roles in the projects "Petrovka, 38", "Ogareva, 6", "Start to liquidate", "Young lady-peasant", "Brezhnev".

In addition to acting, Lanovoy performed with reading programs.

The artist became the author of two books - "Happy Meetings" and "Days Fly by."

They include his memories and reflections on art and much more.

Vasily Lanovoy also taught at the Department of Stage Speech at the Shchukin Institute, which he headed in the mid-1990s.

The actor was actively involved in social activities: in different years he was a member of the Public Chamber of Russia, a member of public councils under the Ministry of Defense and the Investigative Committee, as well as the Chairman of the Board of Trustees of the Immortal Regiment action.