'Piazza of Goodness''K-Ham Project' to save the farmhouse of Handon... 'BTS → Long Legged Uncle' sortie

Long-legged uncles from all walks of life joined forces for the globalization of K-Ham. On the 28th aired on SBS'Piazza of Goodness', Baek Jong-won, who started the K-Ham project to save the farmhouse, was drawn. 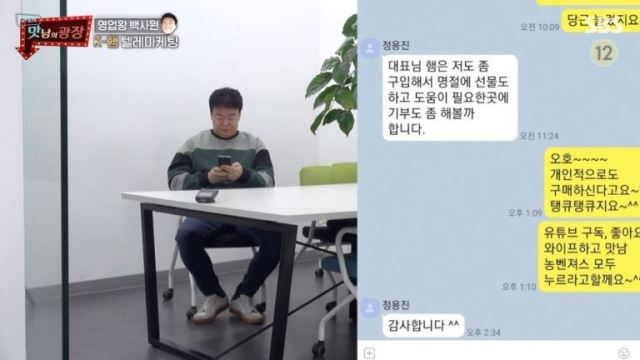 Long-legged uncles from all walks of life have joined forces for the globalization of K-Ham.

On the 28th aired on SBS'Piazza of Goodness', Baek Jong-won, who started the K-Ham project to save the farmhouse, was drawn.

On that day's broadcast, Baek Jong-won developed a ham made with a pig of Fuji meat through 80 days of research.

And it drew attention by finishing mass production through processing companies.

Now all you need is promotion and sales.

Baek Jong-won met long-legged uncles from around the world to sell K-Ham.

The first thing he met was a convenience store uncle.

President Lee Kun-jun told him the purpose and promised, "We will actively cooperate with our affiliated stores as well. And we will make use of it as a convenient food ingredient for convenience stores."

In particular, he said that he would actively help sales through 15,000 stores nationwide.

In response, the president pledged, "If you give me such a goal, it will be painful. I will try to sell it really actively."

The next place I visited was the National Agricultural Cooperative Federation.

Chairman Lee Seong-hoe said, "It was difficult for pig farms to sell ham, but if you sell ham, it will be very helpful."

And Ha Tae-sik, head of the Handon Association, said, "Thank you for helping the farmers," he said. "We can't directly participate, but it would be much better to replace the handon consumed in the sharing event with ham."

He called a friend of the vice president of a pharmaceutical company and asked him to sell a ham gift set.

Accordingly, his friend made Baek Jong-won happy by promising a large amount of purchase.

In addition, Baek Jong-won asked Vice President Park Hae-woong to purchase the delivery app, and he drew attention by saying that he would decide in a good direction.

And Baek Jong-won said, "I contacted the mart's old man earlier. I promised to sell it eagerly. I decided to put it in the restaurant menu as well."

Accordingly, it was known that 94.6 tons of Fuji meat would be consumed just by the promises of several companies, and it attracted attention.

BTS is the main character.

He explained to BTS, saying, "I'm going to ask for something," and explaining the fujisal ham.

And he asked for help, saying, "If you show BTS eating the ham deliciously, it will be a great help in publicity."

Accordingly, BTS readily accepted the proposal of Baek Jong-won, and a collaboration between BTS and the Plaza of Goodness was concluded.

Baek Jong-won has collaborated with BTS' own content'Run BTS'.

Upon his appearance, RM said, "I didn't tremble like this even in Grammy, but I'm so nervous now."

And Baek Jong-won said, "First of all, I want to say that I am really grateful for taking this opportunity. Thank you so much for coming out for the farmhouse."

And throughout the cooking, the members summoned Baek Jong-won to attract attention.

And BTS drew attention by reacting hard to each of Baek Jong-won's actions.

Middle V, who was focusing on cooking, earnestly said, "My mom learned to cook after seeing the teacher. Could you give me an autograph after it is over?"

In response, RM also asked Baek Jong-won for his autograph, saying, "In fact, I was also asked. If I did not receive it, I told him not to come home."

On this day, Baek Jong-won told BTS, "Thank you so much for doing this for the farmers, and if you need me, please call me anytime."

This is RM promoted K-Ham, saying, "It's a good idea, so I'm so happy. I'd be grateful if many people love K-Ham at this opportunity."

Then, Baek Jong-won ended the broadcast saying, "A lot of people in Corona 19 are gaining strength thanks to bulletproof. I hope that K-food will be well informed."