'Alley Restaurant' Baek Jong-won, "What are you doing with good meat?" Refusal to try'Kimchi Steamed'

Baek Jong-won pointed out how to cook Kimchi Jjimjjangi. At SBS'Alley Restaurant', broadcast on the 20th, a solution for the alley commercial area in the back alley of Moran Station in Seongnam-si was in progress. 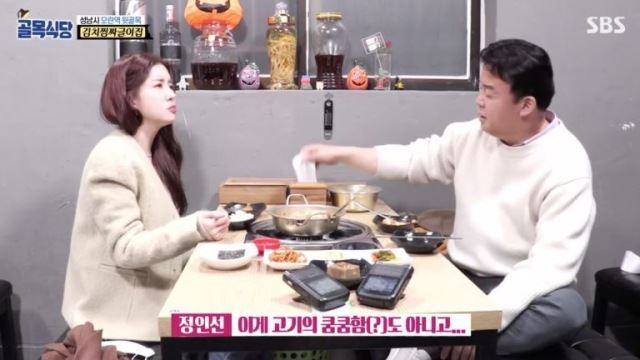 Baek Jong-won pointed out how to cook Kimchi Jjimjjangi.

At SBS'Alley Restaurant', broadcast on the 20th, a solution for the alley commercial area in the back alley of Moran Station in Seongnam-si was in progress.

On this day's broadcast, Baek Jong-won and Jeong In-sun visited the Kimchi-Jjim-Jung-Ji House and sampled Kimchi-Jjim.

And Jeong In-sun, who tasted the meat in steamed kimchi, was surprised by saying, "It tastes like tom-yang-kung. What is this?"

However, unable to chew a few times, he spit out.

Baek Jong-won tried again, saying, "I'll try one more," but eventually he couldn't stand it and spit it out again.

And when he saw this, Seong-ju Kim was embarrassed, saying, "If so, I can't even speak."

Baek Jong-won tilted his head, "What did you do? Meat is a problem. Why did you do this?"

In response, the boss revealed the ingredients used for meat aging.

At the story of garlic, ginger, pepper, green onions, laurel leaves, and mustard powder, Baek Jong-won was confused, "Why do you put mustard powder here?"

The boss set the kimchi steamed in a cooked state, and Baek Jong-won, who saw it, pointed out, "You shouldn't do it this way. If this happens, all the freshness and taste will be lost."

And Baek Jong-won frowned at the materials that were in the worst storage condition.

He also pointed out kimchi that is being steamed and stored 30kg at a time.

In addition, he said about the broth that has been frozen and stored, "It is difficult to control the salinity in this way. The difference in salinity continues to occur because the ratio of ice and water changes every time it is opened."

Finally, Baek Jong-won found the meat in question being aged.

He said, "Where did you learn this? Why are you doing this?"

And he said, "The pickled stuff is foaming. It's already deteriorating. What are you doing with good meat?"