"Opening up" with yourself, reminiscing about your hometown... What did you write in Mo Yan's prose?

Chinanews client, Beijing, January 15th (Reporter Shangguanyun) Since winning the Nobel Prize in Literature, Mo Yan's every move has attracted readers' attention. Some time ago, at an online new book release conference of his, there were about 1.5 million "onlookers".   Recently, "Complete Collection of Mo Yan's Prose" has also been published. In the included essays, Mo Yan talked about the tri 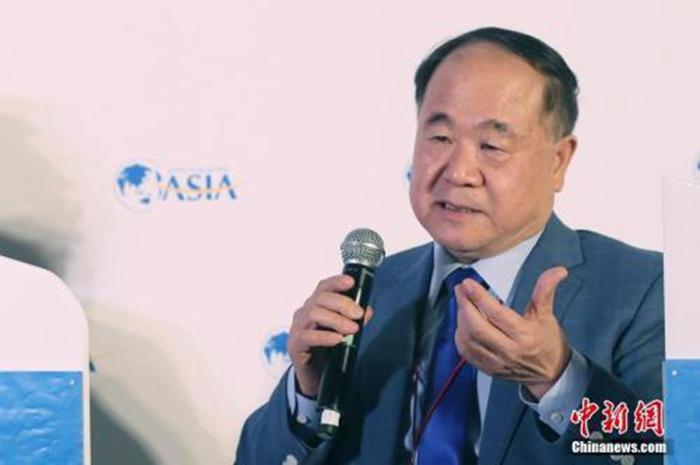 Some time ago, at an online new book release conference of his, there were about 1.5 million "onlookers".

In the included essays, Mo Yan talked about the trivial matters in daily life, and also talked about the memories of his hometown, including travel experiences and thinking about social issues.

Nearly 200 essays, what did you write?

"The Complete Collection of Mo Yan's Essays" contains three volumes, including "The Wall That Can Sing", "The Moonlight is Like Water, and the Horse Body is Like Paint", "Thanks to the Akita Dog", which is fully included in Mo Yan's work from the 1980s to the new century He wrote nearly 200 essays.

According to the publishing house, this is also the first large-scale compilation and selection of Mo Yan's prose works.

In terms of time span, there are not only "Horseshoes" and "Singing Wall" written in his early days, as well as his newly created humorous works "Horse Glasses".

In terms of content, there are not only beautiful essays related to the writer’s life experiences such as childhood anecdotes, hometown reminiscences, travel experiences, etc.; there are also rational proses that ponder and explore social issues and phenomena.

In addition, the book also includes Mo Yan's reading essays, creation talks, prefaces and postscripts for various Chinese and foreign versions of his own works, and prefaces written by him for his friends' works.

"In prose, Mo Yan will sincerely talk about his own work, and readers can also understand the creation process of many works from line to line." said Wang Lirong, the editor in charge of "Complete Collection of Mo Yan's Prose". It was written in one go.

"Kick off" by yourself

Among the above-mentioned three volumes, "The Singing Wall" is quite special, and tends to record the life experience of the writer. Many essays are about life trivial matters and specific and personal feelings.

"It will write about his childhood fun. It will also write about how he spent this hungry time when he had nothing to eat when he was a child." Wang Lirong mentioned that Mo Yan also wrote about how his daughter stayed with her child during the college entrance examination. Spent these two days.

When it comes to past experiences, Mo Yan often uses himself to "shun".

For example, writing "I" when I was a "close friend" lamb Sergey Sha, was slaughtered by his family without "I" knowing it, and turned into meat tumbled in a soup pot, "Mother handed me a bowl of haggis. At that time, although I didn't feel like it in my heart, I still swallowed it wolfishly."

For another example, Mo Yan wrote "Talking After Drinking", recalling that he stole and drank alcohol in his childhood, and mixed cold water in the wine. After his mother found out, he did not expose "I" in front of his father. It was a red sun setting when it came out, "I was bitten by ants and mosquitoes with lumps."

It is not difficult to find that most of Mo Yan's prose is daily life and even vulgar things, but often tells a common trivial matter, including stories with relatives, memories of hometown, and often recorded in vivid and humorous language. , Not just blindly lyric.

"In order to express this vividness and sense of story, he sometimes uses some novel writing methods." Wang Lirong explained.

In addition, "Moonlight is like water, horse's body is like paint" mentions a lot of reading experience.

Talk about chic and attitude towards life

Indeed, in addition to talking about writing and literary views, Mo Yan also talks frankly about some life attitudes.

For example, he wrote articles about "chiness and unrestrainedness", with joking and serious discussion.

"I think chic is actually a state of mind, an attitude toward life, a way to reduce stress, and in a sense it can also be said to be a kind of Ah Q spirit." On how to define "chic", he wrote in " Such a comment was made in "Crazy Talk".

He cited two celebrities in ancient times and thought that they could be regarded as role models for "chic".

One of them is Li Bai: At first he was not chic at all. When he was young, he was obsessed with official careers. To say that it is a bit ugly is an official fan.

Once a person becomes obsessed with being an official, he will definitely not be chic.

But the so-called official position that Li Bai obtained was far from his own ambitions.

He began to drank his sorrows by drinking, and later he developed an alcohol addiction. He slowly became more drunk than when he was sober, and thus entered a cool state, and those great poems were written.

"After training or imitating, dealing with one's material life and emotional life in an affordable way is also considered chic. Although it may not be of nature, it is still beneficial to individuals and society." Mo Yan He also wrote humorously, "So I think even disguising chic is still a good thing and worth promoting."

"Mo Yan will usually record some trivial things in a lot of miscellaneous feelings or miscellaneous talks, but will not be blunt at the end." Wang Lirong said that readers can experience his life, but his purpose is not necessarily to tell you how life should be came.