Caring for a comatose bedridden boyfriend for more than three years, the "post-80s" girl in Hefei looks forward to awakening her lover

China News Service, Hefei, January 14 (Reporter Wu Lan and Han Suyuan) The sun shines into the living room. The nearest window to the living room is a "stand bed."   Peng Yalou was lying on this rehabilitation bed basking in the sun, but occasionally opened his mouth and blinked, and made no other conscious movements. At 10 o'clock on the 13th, when the reporter saw Liu Ning, she turned over an 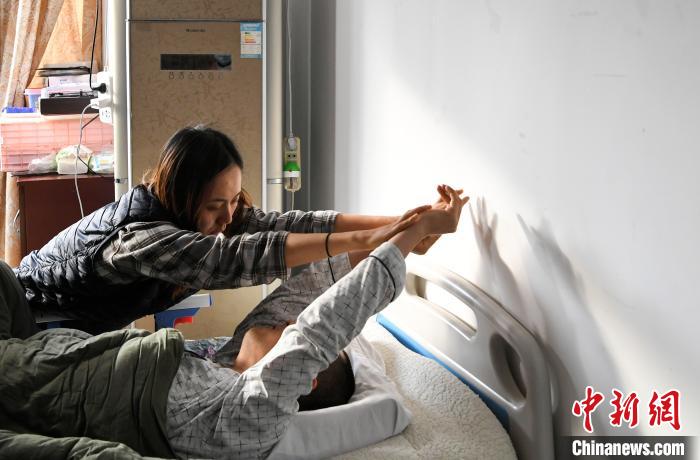 Peng Yalou was lying on this rehabilitation bed basking in the sun, but occasionally opened his mouth and blinked, and made no other conscious movements.

At 10 o'clock on the 13th, when the reporter saw Liu Ning, she turned over and massaged Peng Yalou as usual... This is more than three years, Liu Ning has repeated the most movements, everything is already adept.

"It feels getting closer and closer to waking up..." Liu Ning said. The recent recovery state makes people see hope, and the warmth and help from more and more people who don't know has given him more motivation.

On January 13, when the reporter met Liu Ning, she turned over and massaged Peng Yalou as usual... This is the most repeated actions for Liu Ning in the past three years, and everything has become adept.

Peng Yalou, born in 1987, and Liu Ning, born in 1985, met and fell in love in October 2016. At that time, Peng Yalou had a wide range of hobbies, including diving, skiing, and playing football.

On July 11, 2017, Peng Yalou called Liu Ning and said that he was so sleepy and wanted to sleep.

When Liu Ning found out, Peng Yalou fell to the ground and the gas smelled bad at home.

After a difficult rescue, Peng Yalou was out of danger.

However, due to the long period of poisoning, the doctor diagnosed that he might not be able to wake up.

"When I heard the doctor say that it may be a lifetime of a vegetative person, there have been flashes of thoughts and fragmentary thoughts such as'just go away','what will happen if you leave,' etc." Liu Ning said, but in the end it was Decided to stay to take care of, otherwise it will become my lifelong worry and anxiety.

On January 13, Liu Ning massaged Peng Yalou while talking to make him happy, hoping that her boyfriend would really wake up soon.

"Maybe a lucky person will wake up in a few years." Liu Ning said, "If you become that unfortunate person and you won't be able to wake up in your life, I also want to make him the happiest person who is lying down." Only eight Liu Ning, who is more than ten kilograms, still stands firmly beside Peng Yalou after taking care of her boyfriend for more than 1,000 days.

In the rented house in the Shanshui Mingcheng Community in the Shushan District of Hefei City, Liu Ning, a weak figure, skillfully helped Peng Yalou turn over, rub his body, and massage, talking and amused with him from time to time.

In order to wake him up, Liu Ning talked to him every day, because he was worried that long-term inactivity would cause muscle atrophy, so he would massage him every day, from arms to feet.

On January 13, Liu Ning took Peng Yalou to bask in the community.

"Half a year, a year, two years...I only hope that he can wake up soon." Liu Ning said that at the beginning, Peng Yalou was completely like a vegetative person. He couldn't even open his eyes and was completely incontinent.

She sometimes gets up four or five times a night, turning over, patting her back, and sucking sputum.

For Liu Ning, the most difficult thing is to help Peng Yalou with rehabilitation training. Every time he moves him, it is very difficult.

Liu Ning said that once he carried Peng Yalou onto the bed, his tears flowed down, and there was no particular breakthrough afterwards, but that moment made her feel hopeful.

On January 13, at 8 o'clock in the morning, Liu Ning used a spoon to feed Peng Yalou a nutritious breakfast.

"He finally became conscious from his coma. In order to wake him up as soon as possible, I talked to him every day to make him happy." Liu Ning looked forward to Peng Yalou's real awakening.

"Without Liu Ning, I might not be able to live through that period and continue to the present." said Ge Yumei, Peng Yalou's mother. At that time, her son weighed more than 160 kilograms and Liu Ning weighed more than 80 kilograms. In order to turn him over, Liu Ning every day All have to hug him.

Sometimes when she heard a little movement, she immediately got up from the bed and never had a good night's sleep.

On January 13, Liu Ning prepared to take Peng Yalou to bask in the community.

As long as the weather is good, Liu Ning will take him out for a walk.

"I am especially grateful to him for appearing in my life and making me stronger." Liu Ning said, once she was a beauty-loving girl and liked to follow the trend, but now she is thinking more about helping Peng Yalou recover. Tips.

I saw Liu Ning picked up a piece of paper, rolled it into a thin strip, and gently stretched it into Peng Yalou’s ear. I saw Peng Yalou’s arm was constantly raised, and there were some movements in his hand, and then he coughed out spontaneously With a mouthful of thick sputum, at the moment when the sputum was coughed up, Liu Ning lifted Peng Yalou's head with one hand and helped wipe the sputum with the other hand.

After taking care of her unconscious boyfriend in bed for more than three years, the "post-80s" girl in Hefei looks forward to awakening her lover.

In order to take care of Peng Yalou, the financial burden is heavier, and there are times when I cannot make ends meet.

After learning about the situation, the community grid staff in the local street handled the minimum living allowances, nursing subsidies for the disabled, and home care for the disabled for Peng Ya Building, and sent condolences to him every year. He is currently applying for a subsidy for difficult living.

In order to reduce the burden on his daughter, Liu Ning's 68-year-old father came to help her take care of Peng Yalou whenever he was free.

In order to reduce the burden on his daughter, Liu Ning's 68-year-old father came to help her take care of Peng Yalou whenever he was free.

Liu Ning said: “Guardian Seeds are very small, and many people buy them for love. At present, the sales of Guarum Seeds rely on the help of relatives, friends and good-hearted people online and offline."

"After community communication and coordination, the community property company has waived their property fees and will continue." Hong Jun, secretary of the Swan Lake Community Party Committee, said that the community also mobilized residents to give them daily necessities.

At the same time, the sub-district also issued a support proposal, calling on cadres, employees and units stationed in the district to actively help them.