Electricity in the UAE .. from the simplicity of the beginning to the latest technology

"Memory of the Nation" is a weekly page provided by "Emirates Today", in cooperation with the "National Archives", affiliated to the Ministry of Presidential Affairs, with the aim of introducing the way life in the Emirates before the federation, and during its early beginnings, and the great effort made by the founding fathers of the state for its establishment, and linking it to 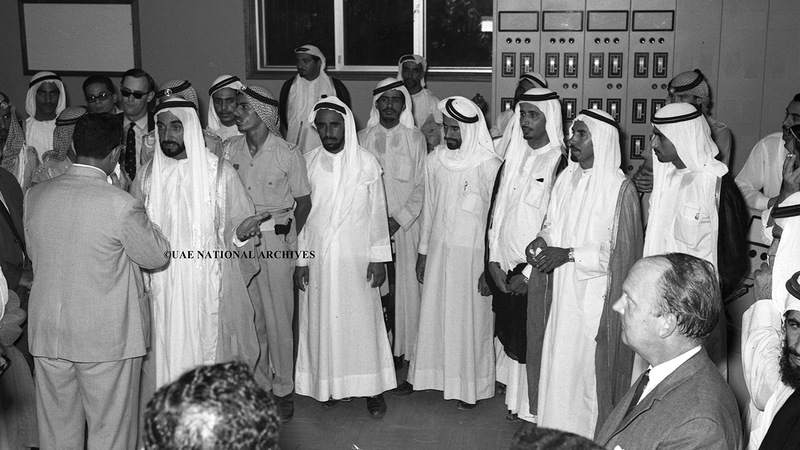 Electricity in the UAE .. from the simplicity of the beginning to the latest technology

A weekly page provided by "Emirates Today", in cooperation with the "National Archives" of the Ministry of Presidential Affairs, with the aim of introducing the way life in the Emirates before the federation, and during its early beginnings, and the great effort made by the founding fathers of the state for its establishment, and linking it to what the UAE leaders achieve, Today, her children are among the achievements the world has witnessed.

The great development that the UAE is currently witnessing in services and infrastructure is the result of continuous efforts that started before the Union was declared, and then developed rapidly with the establishment of the state and the prosperity of economic, social and construction activities in it, so that it can keep pace with the huge achievements and great ambitions drawn by the founding father, the late Sheikh Zayed bin Sultan Al Nahyan, may God rest his soul, for the nascent state.

Development continued at the same pace of enthusiasm and ambition, which prompted the UAE to topped global indicators related to well-being, quality of life, and keeping pace with the latest technologies in various fields.

Among the features of that prosperity is the electricity sector that started in the Trucial Coast Emirates before the establishment of the Union, and the date of its beginning and stages of development differed from one emirate to another, and with the development the state tended to provide energy alternatives to meet the needs of the economic and population development, preserving the environment and sustainability, as the UAE dissolved It ranked third in the world in the production of concentrated solar energy in 2013, and in 2014 the country produced about 140 megawatts of solar energy, and it also adopted its peaceful nuclear program for the production of electricity.

Many researchers have dealt with the development of electricity services in various Emirates. In her book “Electrical Services in the Trucial Coast Emirates”, issued by the National Archives, the researcher, Aisha Saeed Al Qaidi, believes that the topic, despite its importance, has not received a single scientific study that includes all its aspects. A presentation without focus in some previous studies, and often briefly, noting that they relied in their studies on a large amount of official and unofficial documents that were not used previously, with the aim of tracking the development of electrical services in the Trucial Coast, which began in 1933, when the first electricity generator was used. At the rest of the Sharjah Airport, and then followed by attempts to establish an electricity company in Dubai since the beginning of the fifties, until the first private power station was established there in 1955, then the first public electricity company in it in 1959, and then the Sharjah Electricity Company, then the Abu Dhabi Electricity Company, then stations Electricity in the rest of the Emirates.

Al-Qaidi reviewed the first attempts to introduce electricity in each emirate, explaining that the first attempt to establish an electricity company in Dubai came in 1950, when an agreement was concluded on the seventh of March 1950, between the late Sheikh Saeed bin Maktoum, the ruler of Dubai, and a group of merchants to establish the “Al Barq Company”. Electricity »for the lighting of Dubai, and the agreement included eight articles, including: that the ruler of Dubai grants the" Burq Dubai "company and its annexes the right to monopolize Dubai lighting and its accessories with electricity, and that the company is considered affiliated with the Dubai government, and that it has the full right to supply the necessary generators and tools, and other things related to it And exempt from fees, and that the ruler of Dubai grants the company the necessary lands in Dubai without charge to install generators and tools according to what the project requires, and that the period of this concession granted by the ruler of Dubai to the aforementioned company is 35 years, starting from the start of the installation of generators and tools, and that the ruler undertakes not to Any individual or company, regardless of its capacity, is granted a similar concession, neither in Dubai nor in its annexes. Burq Dubai and its annexes pledge to pay the ruler of Dubai 10% of its net profits annually in exchange for granting him this privilege, and this privilege can be extended after the expiry of the concession period .

By the end of 1950, the project remained suspended due to disagreements between merchants. However, the ruler of Dubai continued until 1954 to discuss the problem of a plan to establish Dubai electricity with many merchants, and there was no progress in the matter, and the rent of land continued to rise, which made the cost of the power plant prohibitive.

While it was stated in a report on the Trucial Coast in 1956 that no development had occurred in the electricity projects in Dubai, and yet it imported electrical generators for some other parties in Dubai, Gray Mackenzie, the ship's agent in Dubai, brought the first electric generator in 1952, Its power was three kilowatts, and it was installed by the company’s management in Dubai, after which another private generator was brought to the house of Sheikh Saeed bin Maktoum in Al Shindagha area in Dubai, and in November 1954 the electricity project for Al Maktoum Hospital was approved.

The beginning of the establishment of the electricity service in Abu Dhabi goes back to the third of January 1963, when an agreement was concluded and the British Engineering Project Ltd company, according to the agreement, the Engineering Projects Company Ltd. will establish a limited liability company, called "Abu Dhabi Electric Supply Company Limited." Its capital is two and a half million pounds sterling.

Dr. Saif Muhammad bin Aboud Al-Badwawi, in his book “The Council of Rulers of the Trucial States 1952-1971”, touched on the development of electricity entry in the region, explaining that Engineer Wesley, from Kennedy and Partners Company, was the supervisor of the electricity projects of Sharjah, Ajman, Umm Al Quwain and Ras Al Khaimah. Dubai had its own company funded by the Dubai government and the private sector.

He pointed out that the aforementioned company, in cooperation with the Development Office, in June 1967, started implementing an electricity project in Sharjah, where an amount of £ 90,000 was allocated for the project.

In Ajman, the electricity project was fully implemented, and it was lit up according to the agreement in April 1968.

As for Umm Al Quwain, the electricity project is expected to be completed in October 1967. In Ras Al Khaimah, although the engineer and the executing company started work in May 1967, the project was not completed until early 1968, as a result of some modifications and reforms in the electricity project. Cooperation between the Development Office and the Dubai government to deliver electricity to Jumeirah and from there to Jebel Ali, and the implementation of the project was entrusted to the council’s consultants, Engineers Kennedy and Dunkin, and the development office, with the approval of the Board of Rulers, paid 61,174 pounds.

In Fujairah, the matter was different, at the beginning of the matter it was agreed to supply the emirate with electricity by the engineers Kennedy and Dunkin, and the project was allocated 25 thousand pounds, to be implemented in batches, with the payment of 5000 pounds from the 1967 budget, and the rest is deducted from the 1968 budget. Stopping the project to contract with another company.

The lighting process began when the first electric generator was used in the Sharjah Airport lounge.

The UAE ranked third in the world in the production of concentrated solar energy in 2013.