Is it safe to receive express delivery? Which people need to be quarantined? Shijiazhuang responded

China News Service, Shijiazhuang, January 10th (Pei Guorong is contending) On the evening of the 10th, Shijiazhuang City, Hebei Province held the sixth press conference on the prevention and control of the new crown pneumonia epidemic to release the latest news on the epidemic prevention and control, and answer some of the general concerns of the public problem. On January 9, the entrance gate 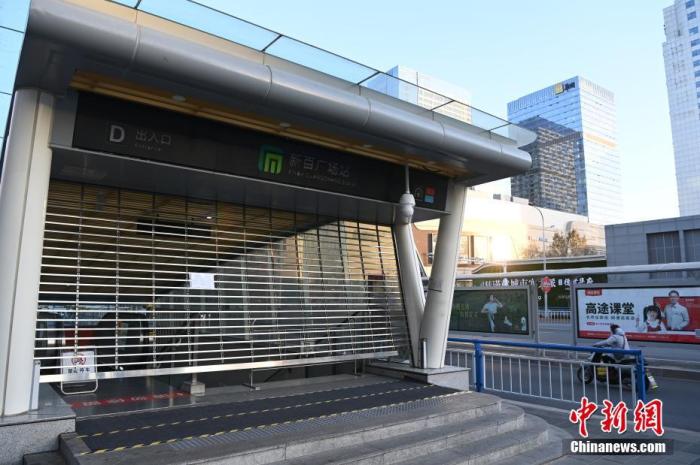 On January 9, the entrance gate of a subway station in Shijiazhuang City, Hebei Province was closed.

Hot spot 1: Is the delivery safe?

Regarding the safety of the received express mails that citizens are concerned about, Zhang Ziyun, director of the Shijiazhuang Post Administration Bureau, said that the business premises of postal express companies will disinfect the environment, vehicles, and express mails every day, focusing on cold chain, international imports, and domestic medium and high risks. Inspection and disinfection of express mail, transportation tools, and operating equipment in the region.

From the 6th to the 8th, all employees in the postal express industry participated in the nucleic acid test organized by the whole city.

On the 9th, a second nucleic acid test was organized for practitioners.

If the test result is negative, the courier brother can send the courier to the community, village and town with his health code and work certificate.

Zhang Ziyun said that since these two days, more and more courier brothers have completed nucleic acid tests and returned to work one after another, active on the city streets, sending daily necessities to every household. He believes the situation will get better and better.

At the same time, he advised citizens to wash their hands promptly after removing the outer packaging after receiving the express.

On January 9, a courier in Shijiazhuang City, Hebei Province delivered daily necessities to residents of a community and drove away.

Hot spot 2: Which groups of people need to be quarantined?

Zhou Jikun, deputy director of the Shijiazhuang Center for Disease Control and Prevention, said that the characteristics of this epidemic are rapid transmission, large numbers of people, and relatively hidden transmission. In order to effectively control the epidemic, the four groups of people should be isolated in a timely manner.

Zhou Jikun suggested that citizens should live a regular life during the prevention and control period at home, ensure adequate nutrition, and maintain a peaceful mind. The outer packaging of shopping products should be cleaned and disinfected in time, and try not to bring them indoors.

If symptoms such as fever, fatigue, dry cough, etc. occur, they should be reported in time and transferred from 120 to the fever clinic of a designated hospital for treatment.

On January 9, a supermarket in Shijiazhuang City, Hebei Province was temporarily closed.

Organize large and medium-sized e-commerce companies such as JD.com and Meituan to carry out online distribution guarantees.

The “Vegetable Express Train” was opened to increase temporary sales points to meet nearby shopping needs.

In the surrounding counties and cities, the service guarantee mode of county dispatch and township distribution is adopted to deliver the necessary living materials of the people to the community, village group, building unit or appropriate location at the door of the house in time.

Under the premise of ensuring no gathering and no contact, supply to residents in an orderly manner, and timely solve the living problems of the people in difficulties.

Hot spot 4: How does Shijiazhuang prevent and block the spread of the epidemic?

Meng Xianghong, deputy mayor of Shijiazhuang City Government, said that the first thing to do is to guard the "small gate."

Shijiazhuang continued to implement community and rural closed management and control measures, except for medical staff, courier brothers and other certificate holders, and vehicles with green passes. The citizens and the masses continued to stay at home for 7 days; secondly, they were optimistic about the "gate".

Keep an eye on key stations and checkpoints such as airports, railway stations, passenger stations, subways, and buses, and continue to strictly inspect and control the "three lines of defense".

Hot spot 5: Is the second round of nucleic acid testing for all employees shorter?

Meng Xianghong, deputy mayor of Shijiazhuang City Government, said that Shijiazhuang will soon launch the second round of full-staff nucleic acid testing. This full-staff testing will take two days, which is shorter than the previous test.

Sampling points will be set up reasonably according to the detection volume, personnel distribution and composition.

Each sampling site must be equipped with sufficient professional sampling personnel, information recruitment personnel, and order maintenance personnel to ensure that there are no crowds or long lines during the sampling period, and the connection is reasonable, orderly and efficient.

According to reports, from January 2 to 12:00 on the 10th, a total of 369 confirmed cases and asymptomatic infections were reported in Shijiazhuang, all of which were admitted to designated hospitals.

There are no critical cases and no deaths.

From 0-12 o'clock on the 10th, there were 40 newly confirmed cases in Shijiazhuang and 6 asymptomatic infections.