From the ancient capital of the thirteen dynasties to the Internet celebrity city 2021, I am waiting for you in Xi'an!

Author: Yue Zhang Yuancheng   A person can only get what he wants when he is in his own city. The city provides him not only with the way of life and goals, but also his sense of belonging and understanding of the city. Even if not everyone, most people gain self-awareness only through his position in the city. ——Alan Bloom, "The Politics of Shakespeare"   At the end of 2020, the TV series "In 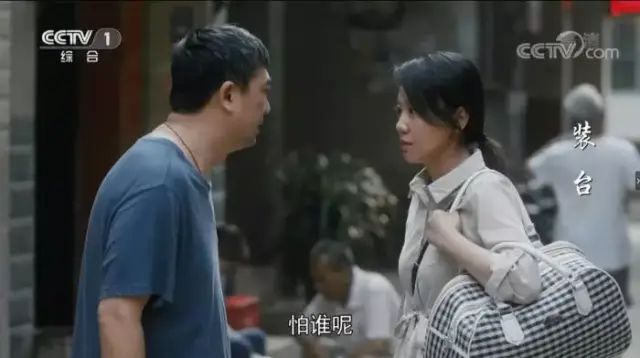 A person can only get what he wants when he is in his own city. The city provides him not only with the way of life and goals, but also his sense of belonging and understanding of the city.

Even if not everyone, most people gain self-awareness only through his position in the city.

——Alan Bloom, "The Politics of Shakespeare"

At the end of 2020, the TV series "Installation" brought the "net celebrity city" Xi'an to people's sight again.

The TV series uses Xi'an as the background of life, and from the perspective of a Taiwanese person, it describes the life in the ancient capital.

Screenshot of the TV series "Installation"

Diao Dashun, a "suffering" worker, walks the streets and lanes in Xi'an, leading his brothers to dress up and support his family.

When it's time to eat, I squatted on the side of the road, took a bite of bashful noodles and a bite of garlic, and occasionally had a drink with my brothers, and then made a "comfortable" sound, which was really pleasant.

This quite pyrotechnic picture stirred the hearts of netizens.

"I'm going to Xi'an" has become the wish of many netizens.

In fact, before Xi'an became popular, he was as quiet as an old man in the warm sun, located in the northwest of the motherland.

Even though he was dressed in the garb of the "Thirteen Dynasties Ancient Capital" and stepped on the land with a "thousand-year history", it was still forgotten by everyone.

In the 1980s, there was a catch phrase to describe Xi’an: “Watch the temple during the day and sleep at night.” This is a true portrayal of Xi’an’s pale economic development.

Bowl of wine in Xi'an Yongxingfang

In 2018, a short video of "Holding a bowl of wine and drunk it, and then throwing it out against the ground" became popular in a short video, and then the hit "Twelve Hours in Chang'an" made Xi'an a "net". "Red City", "Miss Tumbler", "Brush Pastry", "Sanqin Set Menu", Datang Evernight City, Yongxingfang, one by one "check in points" to make this city continue to be full of vitality on the Internet, will be wonderful In the gap of time.

In the tourism data of 2019, Xi'an's performance is remarkable. The total tourism revenue exceeds 310 billion yuan, and it has received more than 300 million tourists from home and abroad, which is equivalent to 1 out of every 23 people in the world.

In 2020, the sudden outbreak of the epidemic brought the country into "emergency preparations" and Xi'an fell into "dormancy", but this calm is different from the past, Xi'an is silently giving itself.

"I don't want to be a role model or a hero. I just don't want to let myself forget my original intention of choosing medicine and the major of critical illness."

"There are still many children in Wuhan who are like you. Their parents are waiting for your mother to treat them. I will definitely return safely."

To lightly write a few words, let life and death be out of the way.

The bridge of the nose was rubbed with blisters, the bruises covered his cheeks, and the protective clothing was soaked with sweat.

Li Tianhao (left), a respiratory doctor from the medical team of Shaanxi University of Traditional Chinese Medicine, hugs his wife who is also a doctor

With the stabilization of the new crown epidemic, Xi'an recovered from "dormancy" and resumed work and production proceeded smoothly.

The main venue of the 14th National Games-Xi’an Olympic Sports Center, "One Field and Two Pavilions" was completed and delivered. The "Struggle" with the participation of the scientific research team of Xi’an Institute of Optics and Mechanics broke a new record for manned deep diving. The Long March 8 carrier rocket with a full range of power provided by the institute was successfully launched. Three lines of the Xi'an subway were opened for operation, and scenic spots were gradually opened.

One of the main venues of the 14th National Games

There is a line in the TV series "The Twelve Hours of Chang'an": "Busy and prosperous, glorious for thousands of years, there is no greater city than Chang'an City", which makes people excited.

There is also a line in the TV series "Installing the Stage": "In fact, no matter what people do, they always install the stage for others. You serve me, I serve you." The light of the "little people" under the city walls can also illuminate the world.

Chang'an, the prosperous Tang Dynasty in history, was prosperous and splendid.

Xi'an, the ancient capital after the "resurrection", is very polite.

The noodles in Shaanxi are not ordinary noodles, just like Shaanxi people, they are as wide as "trouser belt", hence the name "trouser belt noodle".

When customers order noodles, the ones who have a lot of appetite often have three or four.

In addition, all the aunts in Shaanxi are experts in making noodles.

In the past in rural Shaanxi, girls grew up. First of all, they would not sew a piece of clothing or embroider a flower, but would roll out a chopping board full of noodles, so that in the future, the daughter would get the appreciation of her in-laws after her marriage.

In 2021, I will wait for you in Xi'an and take you to listen to the story of Guokui.

The pie is two feet in diameter, round and thick like a pot lid.

Shaanxi calls the biscuits Guokui, which is crispy on the inside and easy to carry.

Legend has it that in the Qin Dynasty, when the Qin Army ruled the six countries and fought everywhere, the dry food carried by soldiers in the army was prone to moldy.

Thus, the man in the army invented today's pan helmet.

When the child is full moon, the grandmother will meticulously make a small pot helmet for her grandson, then tie the money for keeping the year old with a white thread, pass through the hole in the middle, and bring it around her neck.

This is also the most sincere wish for grandchildren.

Mix the spicy noodles with salt and heat the oil.

If in normal times, there are guests at home and there is no good wine and meat to entertain the guests, this is all forgivable.

However, if there is no hot pepper during the meal, the guests will inevitably be dissatisfied and ridiculed.

They inevitably murmur when they see people: "This family is too ridiculous! They really can live their lives. They don't even have a spicy food."

In addition to food, of course I will wait for you in Xi'an in 2021 and take you to see the vicissitudes of history in Xi'an.

Do not screen the door

I want to take you past the door of the no-screen, close to the city wall, and sigh that after thousands of years of wind, the Dutch city comforts the bright moon.

I'm going to take you through the Big Wild Goose Pagoda, see "Driving all the coldness, stacking the creek and counting the trees and firs", and sighing, "The ancient pagoda is leaning against the blue sky, so why don't you go to the distance to see it better."

I want to take you through the Ming City Wall and overlook the magnificent scenery of "mountains and rivers, a country with nine double gates".

I want to take you around the moat and watch the rippling blue waves of the river and the canoe cruising on it.

I want to take you through the Terracotta Warriors and Horses of Qin Shihuang's Mausoleum, and look for your appearance among the terracotta warriors and horses with thousands of faces.

Watching the Qin warriors who have been sleeping for thousands of years brings historical memories, revealing the mighty power of the Great Qin Empire.

I want to take you to the most complete existing bell tower in China, as well as the oldest drum tower of its kind.

Looking at the two plaques "Sound and Hearing in the Sky" and "Civil and Military Prosperity", feel the vicissitudes of wind and rain.

I want to take you to visit the Shaanxi History Museum, which is known as the "Pearl of the Ancient Capital and the Treasure House of China". It houses 18 national treasure-level cultural relics and is the art palace of Shaanxi history and culture and ancient Chinese civilization.

I want to take you around the Daming Palace National Heritage Park to see what the Tang Daming Palace, which is equivalent to 3 Versailles, looks like.

"Tang Minghuang" "Yang Guifei" and many lovers in Huaqing Palace

I want to take you to the Huaqing Palace, one of the four imperial gardens in China, to enjoy the eternal hot spring resources, to review the historical allusions of the princes of the Fenghuo Opera, and to reminisce the love story between Emperor Ming Emperor and Concubine Yang.

I'm going to take you through the Datang Evernight City to see "No bright moon reflected in the cup tonight, neon flickering, singing and dancing", and then taking a photo with "Miss Tumbler".

I also want to take you to the Qinling Mountains by train with a fare of RMB 3, to see the snow-covered snowy mountains, the crystal clear rime, the red dogwoods, the giant pandas, takins, crested ibis, golden monkeys and other "Qinling Four Treasures" .

Sit down and listen to Qin Opera!

I will take you to the Yisu Society, and experience the impassioned and long-lasting Qin Opera in this theater, which is also known as the three ancient theaters of the world art world along with the Bolshoi Theatre and the Royal Theatre.

In the evening, I will take you to listen to the street folk songs under the south gate of Xi'an, feel the vibrant youth of this ancient city, and take out the phone to take a picture of the smiling faces of the crowd.

As the song "I'm Waiting for You in Xi'an" sang: A few months are like a few years, and I look forward to the taste of my city.

Ride a bike to travel north and south. I have to remember every smiley face under the mask.

Understand that Xi'an can't just watch it online, so remember to come here after a while.

If you don’t eat enough meat, take a look at Zhongnan Mountain. After the wind and rain, the sun shines on the wall, waiting for you in Xi’an!