Jike Muguo was broadcast live on the steel ladder.   West China Metropolis Daily-Cover News Reporter Du Jiangqian Yang Tao Xu Xiangdong Xiao Yang Photographic Report   For nearly 30 years, Jike Muguo, a villager in Cliff Village, never knew he could speak so much.   On the Internet, he is an anchor with more than 400,000 fans, and he starts live broadcasting almost every day with his eyes open. 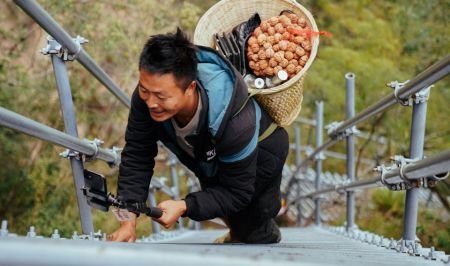 Jike Muguo was broadcast live on the steel ladder.

For nearly 30 years, Jike Muguo, a villager in Cliff Village, never knew he could speak so much.

On the Internet, he is an anchor with more than 400,000 fans, and he starts live broadcasting almost every day with his eyes open.

He generally has no plan and shows what life is.

In the village, there are at least nearly 20 anchors like him, aged between 20 and 30.

After 2017, climbing up the 2556-level steel ladder, you can see people holding mobile phones to shoot or broadcast live.

It seems that the Internet rushed into this village, which was originally blocked by the terrain, overnight, bringing a plethora of modern civilizations, rushing attention and curiosity.

The young people in the village filmed the scenery of the cliff village, broadcasted daily life, brought goods and sold agricultural products...

After the initial exploration, some people left the Internet and continued to plant and breed or find a job. Others gradually found the coupling line hidden behind the Internet: only the tourism industry in their hometown developed, and only the Yi culture and customs received more attention , Their narration can be continuous and updated.

Between going and staying, the anchors of these cliff villages are making their own choices.

In fact, in Cliff Village, if you want to sit down and chat with an anchor, the difficulty is no less than interviewing an entrepreneur or celebrity-even the Cliff Village anchor may be more busy.

November 23, the fourth day of the Yi New Year.

It was dark, Jike Muguo went down the mountain with the pork on his back, and his live broadcast began.

At the bottom of the mountain, he received his niece and started climbing the steel ladder around 11 o'clock. The weather was clear that day, golden sunlight was spreading on the top of the mountain, the clouds were blown away by the wind, towering mountains, deep canyons and winding steel ladders ...Attracts many people to watch every time.

By noon, more than 3,000 people had been squeezed into his live broadcast room.

"You ask me if I'm tired? I'm not tired, I'm used to it." Carrying a basket of walnuts and a box of drinks, I was climbing and interacting live while holding a selfie stick. The speed of Muguo uphill was slower than usual.

It has been 4 hours after returning home, and the live broadcast continued. He drank saliva, wiped his face, and sat down and started selling walnuts.

Muguo can’t really tell about his income, but he is certain that since the live broadcast began at the beginning of this year, he has been able to earn several thousand yuan in extra income each month. After starting to sell the walnuts, pepper and other agricultural products in Cliff Village, his income will be even higher. Is doubled.

In Cliff Village, live broadcast is one of the new things that the villagers have received the fastest.

Now, click on any live broadcast platform, enter the "cliff village" keyword, and a row of related users will appear in front of you.

Once, the cliff village and the world were separated by a cliff with a vertical distance of 800 meters, which was closed for generations over a century.

Today, there is only one screen between the two.

On November 20, the Yi nationality's New Year began. This was the first New Year after 84 poor households in Xiaya Village moved to the county resettlement site. The village on the hillside became busy and lively.

Compared with previous years, the traditional customs of killing pigs and celebrating the New Year with parties are now recorded by more than a dozen mobile phones at the same time.

Mu Guo took short videos of six young people in the same village holding a pig. Soon, more than a dozen short videos of the same scene and different angles could be seen on various platforms.

At first, the benefits of the live broadcast surprised the villagers.

The online name of a certain Serabo from the village is "The Flying Man on the Cliff". When he was broadcast live at the beginning, he could earn up to 20,000 yuan a month, which is equivalent to the income of the family of seven in the previous two years.

Gradually, the care from the outside world made them grateful.

Some netizens directly transferred money to the villagers to purchase washing machines and refrigerators, and some netizens sent a table to eat from Nanjing, hoping that they would not leave their food on the ground.

The child of the villager Jikrazhe suffered from cleft lip and palate. After being seen by netizens in the live broadcast, the girl was taken to Chengdu to complete the operation.

"Fans stay with me every day. If I don't live broadcast, I will miss them." In Mu Guo's heart, he has more friendships through the Internet.

Happiness and troubles of internet celebrities

When Cliff Village took awkward and firm steps and began to embrace the outside world, many of the drawbacks in the age of traffic began to appear.

A 17-year-old salad found that the village had changed.

"I don't want others to say that my hometown is poor and backward." La Zuo was in the second year of Zhaojue Middle School. Once, an anchor from another province climbed up to the village, asked the children in the village to stand together, and then sent out money videos in turn.

Upon seeing this, Lazuo walked away.

She is very angry. She hopes that her hometown will change for the better, but she is by no means a check-in point for celebrities.

In the live broadcast content, after similar scenery and life were repeatedly displayed, in order to attract more fans, some villagers began to deliberately choose the harder road, carrying heavier objects up the mountain.

A certain Serabo, a villager who was the first to broadcast live, once stood on a steel ladder beside a cliff and bounced around.

After seeing this short video, Azi Aniu, Secretary of the Party Committee of Zhiermo Township, immediately asked him to delete it, admonishing him to never make such dangerous actions again.

"Poverty alleviation cannot be waited for. Relying solely on the Internet for rewards is also a kind of'waiting." Dangerous and curious moves attract fans.

At the same time, the township is also planning to organize professionals to train villagers for live broadcast delivery.

Nowadays, when entering Cliff Village, the villagers will directly ask: "Are you a formal media?"

It is also doing live broadcasts and shooting videos, and some people have begun to study specialized editing techniques and scripts.

A few months ago, "Xiang Er in Cliff Village" was still a "live lunatic" who broadcast live for more than ten hours a day. Now, he signs a contract with an online platform, shoots his own editing, and publishes it online.

More and more netizens found him through his videos. He went down the mountain to receive the intriguing netizens to live in his home. Along the way, he fluently introduced the history and customs of Cliff Village.

At the same time, only those live broadcasts and videos can always be presented with new things.

There are still some changes that the villagers in Cliff Village did not notice.

In order to communicate better, villagers who were originally illiterate and not good at speaking Chinese began to learn language and handwriting from netizens.

"It may not be right now, but fans are used to it." Villager Jike Qumu carefully studied live broadcasts and small videos, just as he taught himself Mandarin at the age of 18.

This is the same focus twice in his life, once for life and once for a better life.

Industrial changes and the choice of anchors

In May of this year, in Zhaojue County, 4057 sets of yellow and white Xinanju houses were built. 84 impoverished households in Xianya Village went down the mountain to bid farewell to the adobe houses.

In the hustle and bustle, some people choose to leave.

In less than half a year, a certain Serab from the "Cliff Flyer" lost 70,000 fans because he didn't have time to broadcast live.

"Actually, it is also conceivable." As the first "net celebrity" of Cliff Village, every video of Labo once received tens of thousands of likes. He was invited to the city to do a show and be a guest. It was the first time he saw him. The sea, sitting in the studio for the first time, he discovered that the world was so big.

But Rabo gave up after all.

Now, he is an employee of a tourism company, which mainly develops contiguous tourism resources based on cliff villages.

Rabo is responsible for making videos, making publicity, and picking up tourists up the mountain.

He has 24 consecutive days of work every month, and another 6 days of rest. The monthly fixed income is 4,000 yuan. He feels that he has never left home for so long, "but I feel much more at ease."

There are many ways to get rich through hard work. This is the feeling of Yang Yang, the first generation "net celebrity".

When the media first focused on Cliff Village, Yang Yang was one of the most reported villagers.

At that time, he was a good-looking man doing live video shooting, and a bunch of fans liked and rewarded, but he didn't like it, "We have hands and feet, and we can't live on other people's rewards."

With the help of fans, Yang Yang bought more than 60 sheep and planted olives in the village.

Now, the most important thing for him every day is to search all over the mountains and wilds before dark, and drive the goats in the free range back to the sheepfold. "It's very tired, sometimes it takes two or three hours."

But this former Internet celebrity still has an Internet mindset.

After discussing with the village, he set up a conspicuous billboard on the first resting platform of the steel ladder at the foot of the mountain, with the words "Farming Farm on the Cliff in Zhaojue County". The reported photo, on the other side, is the picture and contact information of the current farm.

For these anchors in Cliff Village, there are separate considerations and plans between going and staying, but what has never changed is the love for hometown.

Nowadays, in their live broadcasts, every time they hear someone say "How backward Cliff Village is", these anchors who originally smiled and said hello will be anxious, "The mountains are full of treasures. The past lifestyles are different. The future will only Getting better and better."