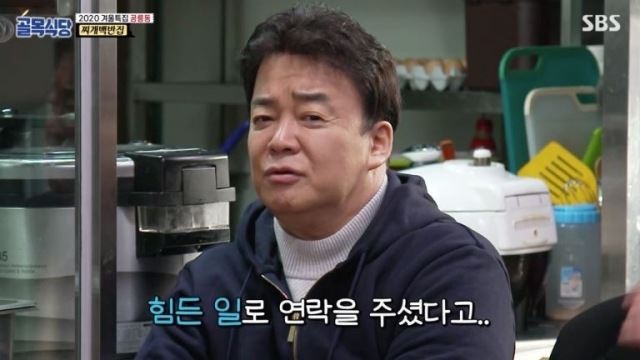 Gongneung-dong Jjigaebaekbanjip confessed to the story that caused the heartache.

In the SBS'Alley Restaurant', which aired on the 30th, the figure of Baek Jong-won, who returned to Gongneung-dong Jjigaebaekban House, was drawn.

Accordingly, Baek Jong-won headed to Gongneung-dong with the MCs.

Baek Jong-won asked the mother and daughter bosses, "It was said that there was a hard work, but what happened?"

So, the boss sighed, saying there was a reason to put a CCTV inside the store.

Afterwards, the story the boss revealed made everyone astonished.

There were many customers who could not find manners, such as guests who came empty-handed and claimed that their luxury bags had disappeared, guests who only wanted to calculate the price for one person after the family came together and had a meal, and those who had an unattended diet. that.

In addition, after ordering additional stir-fried jeyuk with alum, they secretly packaged the stir-fried jeyuk, or came with a child to eat and said that they were sorry for the child's meal.

In response, Baek Jong-won said, "You did a good job on CCTV. How unfair it would be without it."

In addition, he said to the customers who asked for the packaging of the leftovers, "It is possible to refill the side dishes, but make it clear that the leftovers are not packaged. When you get burned later, your responsibility will be a problem."

Then the boss surprised everyone by saying, "Even if the packaging is not possible, I wrap the leftover side dishes in the paper cups that I had to drink water."

In addition, the boss asked, "I don't know how old I should be paid for meals", and Baek Jong-won advised, "If you are 7 years old or older, you should go to get the price for food.

And the boss said that the late-night guests were all swearing.

When asked why these guests were swearing, he didn't hesitate to disregard the bosses, saying, "The hamba house is different too."

Therefore, the boss eventually had to call the police.

Even in front of the police, the customer, who did not admit his fault, said, "You can sue for defamation."

The boss who went through this incident said, "I was so hurt because I wanted to see people only for 6,000 won because I do a 6,000 won alum house."