2020 ... Emirati groups attract attention ... and others conclude the march

The year 2020, with its interspersed events, saw the shedding of light on many personalities who were able to draw attention and deserve to be honored and celebrated at the local, regional and global levels, for their achievements that enhance the value of the nation and its position in the fields of culture and art. On the other hand, 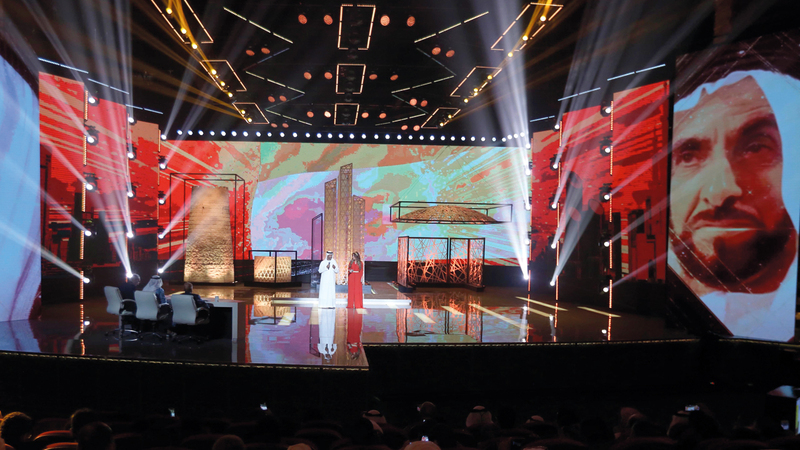 A look at honored people with accomplishments ... and absentees whose work remains present

2020 ... Emirati groups attract attention ... and others conclude the march

The year 2020, with its interspersed events, saw the shedding of light on many personalities who were able to draw attention, and deserve to be honored and celebrated at the local, regional and global levels, for their achievements that enhance the value of the nation and its position in the fields of culture and art.

On the other hand, the year was not without the absence of statues that provided much during her career, and despite their absence, their work will remain present on the scene, and their legacy remains a source of inspiration for new generations.

Here is an overview of a number of the honored ... and the absentees:

The first Arab to preside over the International Publishers Association

The International Publishers Union announced the appointment of Sheikha Bodour bint Sultan Al Qasimi, as president of the federation, starting from its next session of 2021, to be the first Arab and Emirati woman to hold this position in the history of the Federation, and the second woman in the world after the Argentine Anna Maria Cabanillas, who took over the presidency of the Union between 2004 and 2008.

The President of the Republic of South Korea, Moon Jae-in, awarded the Minister of Culture and Youth, Noura bint Muhammad Al-Kaabi, the Diplomatic Service Medal - the Gwang Hwa Medal, at a ceremony held in Abu Dhabi this December, in appreciation of her efforts to support and develop Emirati-Korean relations by encouraging cultural exchange And creative between the two countries.

Ali Abdullah Al-Ahmad, the UAE ambassador to the Republic of France, presented his credentials as a permanent representative of the UAE to the United Nations Educational, Scientific and Cultural Organization (UNESCO) to the Organization's Director-General, Audrey Azoulay, at the organization’s headquarters in the French capital, Paris, after the UAE’s membership in the Executive Council. At UNESCO in November of last year.

Emirati expert in the UN organization

Dr. Ahmed Murad, Associate Deputy for Scientific Research at the United Arab Emirates University, was chosen last July as a member of the UNESCO Open Science Advisory Committee, representing the Arab region, due to his experience in scientific communication and regional scientific cooperation, which contributes to the recommendations of the United Nations Educational and Scientific Organization. And culture (UNESCO).

A new achievement for the girls of the nation

Dr. Rima Al Hosani, a candidate for the United Arab Emirates, won the chair of the Support Fund Committee for the Elimination of Doping in Sports of the United Nations Educational, Scientific and Cultural Organization (UNESCO), after the Fund's member states voted in the elections, becoming the first woman to hold this position since the fund was established in 2008.

Member of the American Academy of Arts and Sciences

The American Academy of Arts and Sciences announced the election of Zaki Anwar Nusseibeh, Minister of State, a new member of the Academy, which is one of the oldest institutions concerned with culture, thought, science and creativity in the world, founded in 1780, and honors excellence and meets leaders in every field of human endeavor, to study ideas New and tackling issues of importance to the nation and the world, and working together.

"The Poet of a Million" and "The Prince of Poets"

The Emirati poet Mubarak won the Al-Oud Al-Amri, the title of "The Poet of the Million" in its ninth season, which was held this year, and concluded its competition last April.

The "Prince of Poets" program won the award for the best initiative to serve Arabic poetry, within the Prince Abdullah Al-Faisal International Prize for Arabic Poetry in its second session.

On the first of last August, the Emirati researcher in the political history of the UAE, Dr. Salah Qasim Al-Banna, who was distinguished by his broad culture and understanding of social, historical and political aspects, passed away in his doctoral thesis, which included a reading of the economic, cultural and social reality before the founding of the state, and also in The period 1750-1971.

On the eighth of last November, the literary and cultural arena in the Emirates lost, the Emirati writer Muhammad Saleh Al-Gurg, who died at the age of 84, after a march during which he presented many writings that affected the cultural arena and were published through the pages of newspapers and magazines, the most important of which is his translation of Rubaiyat al-Khayyam, A book that included his articles that he used to publish under the title "The tip of the iceberg."

The Emirati artist, Muhammad Al Hamar, one of the founders of the Sharjah National Theater, passed away last September. He is one of the pioneers of the theater movement in the Emirates. The Reds participated in most of the works of the Sharjah National Theater, including the play “The Head of the Mamluk Jaber”, before the lights receded from him.

Last July, the cultural and Arab circles lost the Emirati writer and researcher, Dr. Hussein Obaid Ghanem Ghobash, a professor at Saint Joseph University in Beirut and the Emirati diplomat, who had previously served as the UAE’s permanent representative to the United Nations Educational, Cultural and Scientific Organization (UNESCO).

Internationally, Al-Awar worked as a visiting professor at Boston University's Space Research Center, and as a representative of the state at UNESCO.

Al Mazrouei was accompanied by the late Sheikh Zayed bin Sultan Al Nahyan, may God rest his soul, for several years, as a correspondent and representative of the radio.

He also presented many national and cultural programs, and the poet Bin Zahir’s poet was also recorded.

The Emirati poet and writer, a member of the Emirates Writers and Writers Union, Thani Abdullah Thani Al-Suwaidi, passed away last May in Egypt, at the age of 54, after an incurable disease.

His works include the novel "Diesel", the poetry collection "Things Pass," and another group entitled "Let the saliva of the sea dry up."

Khalfan bin Sindia Al-Mansouri died in Abu Dhabi last May. He is one of the people interested in Emirati heritage and a member of the jury of the heritage program, "The Badge", which was shown on the "Emirates" channel during the last month of Ramadan.

He was born in Sharjah in 1932, and grew up in a family that combined business with a passion for science, culture and literature, and was particularly interested in history books, news and genealogies, until he became an argument and reference, especially with regard to the Emirates and the Gulf region.

At the age of 83, the engineer, Abdul Hafeez Khan, passed away in February 2020, who worked as the first agricultural advisor to the late Sheikh Zayed bin Sultan Al Nahyan, may God rest his soul, when he was the representative of the ruler in Al Ain.

Khan Yawar Al-Yousifi, known as Al-Khabeer Khan, was the first university graduate with a degree in agriculture to set foot in the UAE.