After walking into the big theater, what else can talk show do?

It is hard to find a ticket for the talk show of Xiaoguo Factory at SAIC Shanghai Cultural Square recently. (Photo provided by the organizer)   ■Our reporter Wu Yu   Different from the offline talk show performances in previous years, as related variety shows enter the "off season", this year's offline talk show has always maintained the popularity of hard-to-find tickets. With the three talk sh 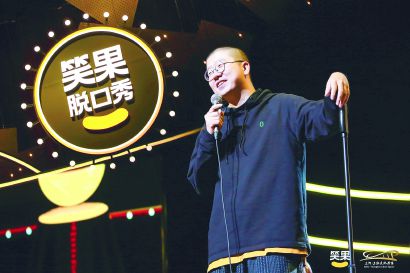 It is hard to find a ticket for the talk show of Xiaoguo Factory at SAIC Shanghai Cultural Square recently.

(Photo provided by the organizer)

Different from the offline talk show performances in previous years, as related variety shows enter the "off season", this year's offline talk show has always maintained the popularity of hard-to-find tickets.

With the three talk show performances of Laughing Fruit entering SAIC·Shanghai Cultural Square this month, the space of the talk show theater is getting bigger and bigger. The rich possibilities of comedy show in different spaces have also attracted people's attention.

"The last happiness of Sunday was given by Xiaoguo Factory." After the third season of "Talk Show Conference", the talk show did not fade out of people's vision, but became a trendy lifestyle of young people.

This year, regular performances such as midweek shows and weekend shows can no longer meet the needs of the audience. Talk shows have entered more art venues and life scenes, and the industrial potential of "Comedy+" is eye-catching.

"Miankong" is not "hunger marketing", and it needs "factory" to continue to polish it into the grand theater

"Two years ago, the form of performance that everyone did not understand, entered a hall-level performance venue like Cultural Plaza, and received a good response, which strengthened our confidence in exploring the touring market and performances in the theater in the next two years." Xiaoguo Culture Vice President Liu Lijuan said.

"The talk show not only provides jokes, but also provides a way to communicate with young people, and use humor to relieve the pain in life." Liu Lijuan understood the "restart" of the talk show industry after the epidemic.

In the face of embarrassment, it re-established the connection between people and life.

At the beginning of the epidemic, the offline performances of the talk show were greatly affected, and the future of the 20 to 30 tours was in an uncertain situation.

However, in the variety show "Boom Out of the Circle", star contestants such as Yang Li, Wang Mian, and Li Xueqin used humorous and sharp "pops" and unique perspectives of life observations, giving the audience a warm sense of companionship, which greatly stimulated cultural consumption Willingness.

In the theater, many audiences felt the difference between online and offline talk shows. The offline immersive atmosphere can fully present the charm of comedy, add more unique interactive links, and provide more fun in communication.

Entering more theaters and increasing the number of tours have become the consensus of the industry and the growing voice of the audience.

Although the "second space" of the small theater billing will make the audience complain, but for entering the large theater, Liu Lijuan still said that the annual tour model of foreign professional actors may not be fully applicable to the current development of China's talk show industry.

"Considering as a professional operator, not all comedy products have the depth of content and the actors' control ability are suitable for entering the big theater." The big theater puts forward higher requirements for the actors' communication ability and the penetration of content depth; The audience gradually builds up their cognition, puts aside the tension of "sitting right away", and looks at the talk show entering the grand theater with a more relaxed attitude.

"After all, the hearty feeling of a talk show is inseparable from the audience."

Xiaoxi He, the co-founder and CEO of Xiaoguo Culture, put the talk show into the Cultural Square in Weibo reposting as "the glory of the industry".

Xiaoguo’s performing arts space is named after a “factory” rather than a “theater” precisely because “the factory is a place where comedians polish their artistic skills”.

As a young comedy company with content-driven content at its core, stepping into a broader art hall is an attempt to roll out a tour and expand the scale of the industry in the future. It also tests its ability to continuously create high-level unique comedy content.

"For example, if a company makes shoes, all people will have no interest in shoes. They think money is real. In fact, shoes are real, and profit is only the result."

"We are conceiving the form of comedy space. The space for performing arts is getting bigger and bigger. How can we make use of the leisure time when there is no performance during the day?" Liu Lijuan said. In addition to the exploration and in-depth presentation of content, the industry has developed rapidly and opened up more Demand market.

The three Xiaoguo performing arts spaces that have opened in Shanghai are expanding one by one, and the "extension" of comedy is also expanding. The talk show industry is expected to become a cross-border platform linking more brands, companies and communities, providing new urban cultural consumption experience may.

Last year, the Xiaoguo factory in Xujiahui opened the "Comedy Weekend" and sold about 3,000 tickets for performances and welcomed 6,000 people. Many audiences did not buy tickets and lingered in the markets around the talk show.

"The value of comedy will not be limited to the program level, but to be able to access more scenes... Whether it is by watching online long videos, short videos, or going to various offline consumption scenes, people are happy Experience.” He Xiaoxi once said at an industry summit that the added value and sense of connection of the talk show enable it to enter the scenes of various industries.

"The next goal may be the Xiaoguo District, to develop their favorite surroundings, markets, aggregation catering and other life scenes for the audience, so that the audience can stay longer and gain more in the communication atmosphere of comedy." Liu Lijuan said, Many companies have also invited Xiaoguo into the cubicle of the office building and Taobao's live broadcast room.

The interactive participation of comedy and multiple subjects has brought about the dissolution, innovation and transformation of boundaries, and has continuously injected vitality into the cultural consumption life of the city.