Baek Jong-won promised to be a reliable reinforcement for the Pohang house. In SBS'Alley Restaurant' broadcast on the 16th, Baek Jong-won, who visited the budget of Chungnam Province, was drawn. 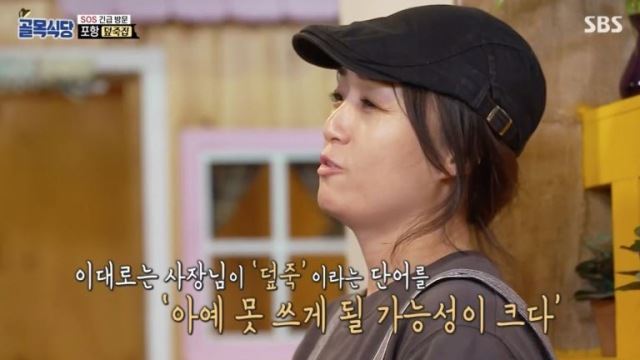 Baek Jong-won promised to be a reliable support force for Pohang's stucco house.

On the 16th, SBS'Alley Restaurant' depicted Baek Jong-won who visited the budget of Chungnam Province.

In the broadcast that day, Baek Jong-won went out to find the stores that appeared in the alley restaurant for the winter special feature of 2020.

The first place he visited was the Pohang House.

Last October, a franchise company followed the menu and company name of the restaurant, causing controversy.

Baek Jong-won met the boss and could not hide his confusion.

And the boss shed tears while confessing his hardships.

The boss, who only cared about cooking, said that he accidentally heard a story about the franchise company from customers.

In particular, it turned out that some of the guests misunderstood the boss.

That the boss made a lot of money by opening a franchise company.

As a result, the boss said that he was shocked and asked for help from the production crew because he did not know how to solve it.

The boss said, "I asked for help because it was a problem that I couldn't deal with alone. Thank you very much."

And the boss said, "With the help of the production crew, I sent the contents proof to the company, and I felt like I got a thousand guns, but when I received it, I thought there would be feedback right away, but I didn't have it at all. If I just sent an email, I sent the mail, but there was no feedback and it was frustrating. I put my feelings on social media in mind and I focused on business."

The boss said, "After my article was posted, it was articleized, and the production team announced an official position that they would help me. Then the company's boss came to see me on that day," he said. "But I would have been able to contact you in advance, He said he came and knelt in front of his younger brother."

In response, Baek Jong-won said, "It's scary because there are such things suddenly," and said, "I must have had a lot of trouble in my heart. I wonder if I can only care about food."

And the boss also talked about the name'Dukjuk'.

The boss said, "My customers are telling me to patent it, but it wasn't worth it. I thought it was an idea that anyone could develop."

And the boss said, "I only have to pay attention to cooking, but there are so many things to fight that I want to give up."

Then, Baek Jong-won said, "We are there, and I'll take care of the fight for you. Even if the boss doesn't lose his original intention, we're grateful. We'll solve these worries." He promised to make every effort to never overlook the sublime efforts of individuals. did.

And on this day, Baek Jong-won went to Pyeongtaek with the MCs.

They decided to visit a noodle restaurant and a tteokbokki restaurant in Pyeongtaek.

Accordingly, the MCs looked at the two reviews first.

First of all, from immediately after the broadcast ended, until recently, the noodle restaurant was very popular for all aspects of taste, price, service, and so on.

However, sometime after the broadcast, the story that the grandmother's boss could not be found was told, which aroused doubt.

Accordingly, the production crew dispatched agents to check the condition of the noodle restaurant.

And, according to the reviews of customers, the taste, price, and service were still the same.

Also, I confirmed that there is no grandmother's boss and that the daughter is running.

Baek Jong-won and MCs also looked at the review of the tteokbokki house where Seyo is located.

Most of the reviews were criticism.

In particular, many contents pointed to the moist fried and swollen tteokbokki that had been fried in advance.

As a result, Baek Jong-won dispatched an agent to pack tteokbokki and tempura.

And the agent went to the Tteokbokki restaurant and asked if they had fried or Tteokbokki in advance.

In response, the boss said, "There are a lot of customers, so you have to fry the tempura in advance," and explained that the tteokbokki was sold out in the morning and made a new one.

However, the condition of the tteokbokki and tempura that were packaged by Baek Jong-won and MCs was different from the boss's explanation.

The inside of the tempura, which had a yellow color on the outside, was not cooked properly, and was too greasy, which made the appetite drop.

In response, Baek Jong-won frowned, saying, "If the outside is yellow but the inside is not cooked, the oil is old."

Then, Baek Jong-won, who sampled Tteokbokki, surprised everyone by saying, "This is the taste. It's the original taste."

Meanwhile, at the end of the broadcast, the appearance of Baek Jong-won trying to find a direct way to solve the problem of Pohang Duck Juk House was announced and attracted attention.