128 yuan to buy a life! Social new favorite "script kill", have you played it?

Chinanews.com client, Beijing, December 12 (Peng Jingru) Chinese antique tables and chairs, jacquard palace lanterns, in this distinctively furnished room, several young people wearing various Hanfu, or holding sabers or heads Dai Douli...This is not a shooting scene of a costume drama, but a "script killing" venue that provides an immersive experience. This kind of game that can perform role su 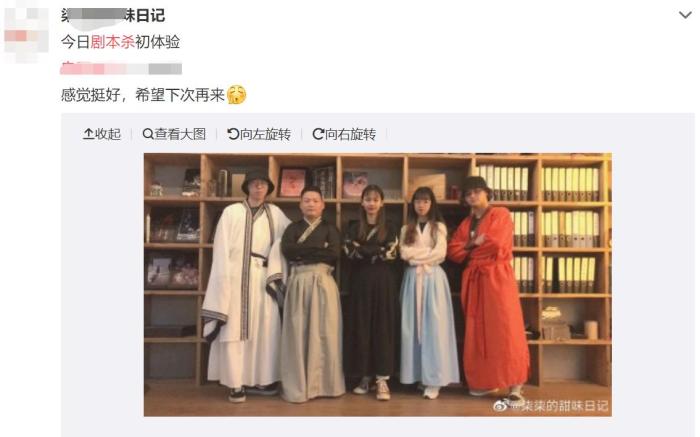 This kind of game that can perform role substitution and has a reasoning nature is now popular with many young people, and some even come to the store to "check in" every week.

, the script became the new favorite of social

"For fans of suspense reasoning, it is their greatest pleasure to find the murderer through details and logic. For me, it is this game that attracts me by substituting myself into the role of the story and experiencing another kind of life. The key." Miss Sun said that the rules of the game for script killing are probably that the player first selects the character, reads the script corresponding to the character, collects clues and finds out the real murderer in the game.

She said that basically every weekend, she would ask her friends to go to the store to play together. If the store’s real scene is good enough and the host (players generally call it "DM") is also professional, sometimes she really feels like she is the script The person in the show experiences the same love and hatred as the person in the play.

The charm of Script Killing in creating diverse characters has also been recognized by the senior player Mr. Yang, "Maybe I will play Zhang San today and Li Si tomorrow. The scripts of Script Killing can be explored both at home and abroad, and the content is richer. In contrast, , The backgrounds of games such as Three Kingdoms and Werewolf are relatively single."

Mr. Yang said that he first started playing script kills out of social needs. “You can meet new friends through the game. The script kills are more friendly to novice players. Players will not be eliminated before the game ends. The sense of participation has always been All of them will ensure that the player base will continue to expand."

A visit to Chinanews.com learned that in many script-killed stores, if the number of players does not meet the starting standard, the store will help to form a team.

Online and offline are blooming, this industry is very profitable?

"In November, we drove around 170 cars (note: game sessions). Players in our store usually come to play in the afternoon and evening. When business is best, we drove 20 cars in 24 hours."

Ruby's dad opened the Wuhan Cat Detective Agency because he likes script killing. He believes that script killing has a great potential in this industry and has strong vitality, which is worth doing.

According to the report of the Meituan Research Institute, in 2019, my country's script-killing industry market grew rapidly, with the scale being twice that of 2018, breaking through 10 billion yuan.

The interior scene of a script-killing shop in Wuhan.

"The profit in 2019 is very good, and this year has been affected by the epidemic." Xiaoyao Zhenzhen (Hua Ming), the owner of Beijing Datang Reasoning Bar, has opened two stores. "This industry has just begun, because from high school students to middle-aged Everyone can accept it, the audience is wide, and more and more people will play."

The epidemic has blocked offline business, but online scripts have gone upstream.

During the Spring Festival of 2020, the Baidu index of "Script Killing" was more than 5 times that of normal days, and the server of the script killing APP "I Am Mystery" even crashed.

However, the online gaming experience is not favored by some players and offline stores.

"Stores with limited real-world quality will affect the player's sense of substitution, not to mention the online gameplay that relies purely on reasoning." Mr. Yang believes that online formats cannot bring the environment and sense of communication required by the script to kill players, and script kills need to be practical. The venue.

Xiaoqian, the owner of Wuhan's script killing shop, also believes that players who have experienced offline gameplay generally do not like online, and novice players are more likely to try online first.

Xiaoqian owns her own original studio for Youqu scripts. Faced with rumors that a script sold for nearly one million yuan, she said that a script can sell for hundreds of thousands under normal circumstances, but this includes scripts. All the profits of the studio and the publisher.

"Not all scripts can be sold for millions of dollars. The profit depends on the cost of the script. If the investment cost is low and the quality of the script is good, the profit will definitely be no problem if the publicity is well done."

One person plays a few roles, and practitioners become versatile

Like Xiaoqian, there are many people in the industry who are both the store owner and the distribution.

Mr. Yang said that the scale of the current script-killing industry is not large. Many times a script-killing author will also be a merchant and distributor, and multiple roles will be on one person.

"First of all, I am a script killer, and I also do the business of real scene and desktop forensics. In addition, I also cover the script distribution business. I have basically covered everything I do in this industry." Ding Shisan of Chongqing Tianfang Night Explorer was originally the host. People now also write scripts and perform quality control.

"But no matter what role you are, you must first have content. At this stage, there is still a lack of good content. Most of the scripts we play now may have been produced a few years ago." Mr. Yang said that the current script kills The author may be a script killer or a lover of mystery, rather than a very professional writer.

"However, due to the epidemic this year, some people engaged in screenwriting work in the film and television industry have entered the circle of script killing, but the overall proportion is not large.

In the eyes of the new author Wang Xiaoye, the creation of scripts is a relatively complicated process compared to conventional novel creation, because many aspects must be considered: as scripts, even emotional scripts require basic reasoning factors, which requires reasoning. Creative ability and strong logic ability; 4-5 hours of game, to make the player not boring, have something to do, but also have surprises from time to time, you need to have the ability to control the player experience; story and plot creation ability is also necessary Preparation; the current requirements for good books also require novel themes and mechanisms.

The development of the industry has gradually increased the requirements for authors, which made Wang Xiaoye feel certain pressure.

"My script "Ark on the Other Shore" was actually created at the end of last year. At that time, it was planned to be released according to the city limit (generally, the quality of this type of book is relatively high), but because the epidemic was delayed until recently, it was forced to change it to The boxed distribution method is not that the script is not good enough, but that the plot size and novelty also need to race against time."

But the fruit of the hard work of the script writer may also face the risk of being "sale".

Chinanews.com searched for "Script Kill" on a certain platform and found that the current electronic version of some popular scripts is 9.9 yuan free shipping, and some even as low as 4.99 yuan.

Xiaoqian said that the general agreement on the permissions of the script is that as long as it is not pirated, it can be used.

"But there are still a lot of piracy. We generally can only check where the pirated scripts come from. Rights protection is thankless. It is better to do the scripts if you have the time and energy to manage this matter."

On a certain platform, some stores are selling pirated scripts.

Ding Shisan said that basically every city has such a situation, and if encountered, he can only make appeals and condemns.

Now stores and distributors have genuine alliances to jointly maintain their own market for selling and buying scripts, openly boycott pirated script stores, and distributors will no longer sell their scripts.

"But because the policy has never been a solution to the situation of script piracy. To put it plainly, we only have copyright but no copyright. So this is also a headache for our distributors and stores. It means that the things we have worked hard to create can easily be plagiarized by others. Selling." In Ding Shisan's view, this problem can only be achieved by working together within the industry to slowly improve the market.

"This industry is gradually being regulated, but it is not regulated yet." Xiaoqian said.

Ding Shisan is still very optimistic about the future of the script-killing industry.

He believes that the industry is gradually maturing. From the initial limited script distribution channel to the current script exhibition format, it is not only convenient to sell scripts, but also makes many friends.

Have you ever played script kill, which character do you want to "soul wear" most?