Baek Jong-won gave a special gift to the staff. At SBS'Plaza of Goodness', which aired on the 10th, Baek Jong-won prepared snacks for the staff to celebrate the 1st anniversary. 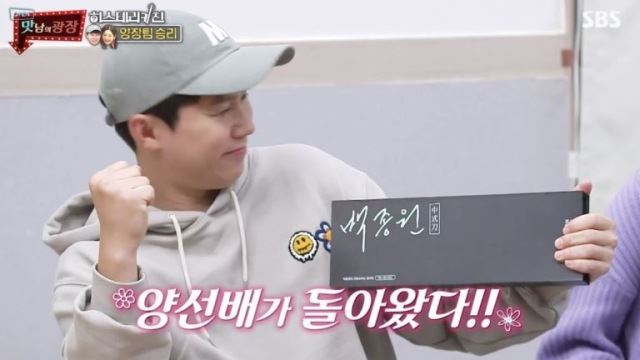 Baek Jong-won gave a special gift to the staff.

In SBS'Plaza of Goodness', which aired on the 10th, Baek Jong-won prepared snacks for the staff to celebrate the 1st anniversary.

In the broadcast that day, Baek Jong-won and Kim Dong-jun prepared snacks for the staff and drew attention.

He made the fish cake soup first.

Baek Jong-won made a fish cake soup with radish, red crab, and kelp.

In particular, the first flavored fish cake soup made with red crab stimulated the appetite.

Kim Dong-jun, who tasted the fish cake soup, admired, "This is true. It's really delicious", and Baek Jong-won was satisfied with saying, "It kills the smell."

As a result, Baek Jong-won made a lively and informed parody with the production crew and introduced the secret of fish cake soup and made a laugh.

He also prepared a special mara sauce as a fish cake sauce that day.

Kim Dong-joon, who first tasted the mara sauce seasoning, praised him, saying, "I am Marada."

He made 4 types of taiyaki bread with not only red bean sauce, but also cream cheese, sweet potato cream, and puff cream.

The production crew, who saw this, asked, "Please add a lot of cream cheese," and Baek Jong-won baked Taiyaki at the request of the staff.

All the snacks, including the baked sweet potato Kim Dong-jun baked, were completed, and the staff lined up to taste the snacks shot by Paik.

In particular, the fish cake with mara sauce and the cream cheese Taiyaki were well received by the staff.

And in the hysterical kitchen that day, Yang Se-hyung won the backscalibur with victory.

In particular, Yang Se-hyung made a laugh because he did not spare an explicit appeal for victory.

In addition, in the second Baekya restaurant that opened on this day, Promise Nine's Jisun showed stir-fried pork with red pepper.

Ji-sun, who cooked dishes according to Baek Jong-won's recipe, drew attention because he didn't even see the liver.

Ji-sun said, "It's a habit, but I don't see the liver well," and Nong Benziers wondered what the taste would be.

Kim Hee-cheol said, "The viewers have edited everything they saw, but it's not the taste that they didn't taste. It's really delicious."