The legendary Berlin Schaubühne has produced a number of great actresses. Jutta Lampe was one of them. A whole piece of theater history comes to an end with the death of the 82-year-old.

The question was always: nightwalker or sutler?

The big showers of the old Federal Republic always had something slightly disguised;

while almost all of the great actresses in the GDR seemed prepared for their role as "Mother Courage".

So much for a solemn introduction!

For among the clairvoyant somnambulists of the West there was an actress to whom the nocturnal crown was due.

She was the queen of educated hearts.

What is meant is the great, transfigured, theatergoer adored by generations of Berliners: Jutta Lampe.

She was really great.

The arched forehead with the round, melancholy eyes exuded an aura of porcelain sensibility.

Her laughing bell was contagious.

A slight hollow back and the reddish long hair lifted her out of every ensemble.

Slightly saturated with tears, peach-light despite all the colors.

Is it imagination, or has you actually never heard a single, rude note from her?

The noble, glass transparency of this actress was ageless for decades.

So Jutta Lampe not only became an icon of the Berlin Schaubühne.

She was the magic of the theater.

Her brilliant achievements: Phädra, Ophelia and numerous roles in the pieces by Botho Strauss.

They produced admiration - and certainly envy.

For decades, female leading roles at the Berlin Schaubühne have always been attributed either to her - or to her tragedies towards Edith Clever.

But Jutta Lampe (unlike Clever) has hardly found any imitators.

Were their means too singular?

Or is the affection too great that would have tainted itself by copying?

Maybe it was because loneliness, an unattainable naivety and melancholy resonated in Jutta Lampe.

In these things she was unsurpassed

One must have seen her as Athene in Peter Stein's “Orestie” (1981), hanging on a rope high above the audience, rushing into the hall - as a lovely savior.

How she chirped as Mascha in Chekhov's “Drei Schwestern” (1984) and flirted with Otto Sander.

Or when "Orlando" by Virginia Woolf (director: Robert Wilson) was the lonely time traveler in a strange, thin theater ether.

In these things she was unsurpassed.

Last but not least, behind the wide-eyed, astonished entrance of this actress hid: Inappropriateness.

After taking acting lessons from Eduard Marcks in Hamburg in 1956, she made her debut in Wiesbaden and Mannheim.

In Bremen, where the Flensburg native was part of Kurt Hübner's legendary ensemble, she was put into comedies, which she didn't like.

Peter Stein cast her as the arrogant Lady Milford in "Kabale und Liebe", from which one can see that the type she was entitled to was not clear from the start.

It was only in Bremen's “Torquato Tasso” (1969), a kind of founding tract of what would later become the Schaubühne, that Peter Stein - with whom she was then in a relationship for 16 years - discovered the fragile, trusting tragedian in her.

Not one that made you shudder.

But that could warm up.

Great Berlin appearances as Solveig (“Peer Gynt”, 1971) and Natalie (“Prince Friedrich von Homburg”, 1972) defined her rank as the player of the untouched.

Since she was hardly trusted to have serious ulterior motives, everything seemed open and clear, as if in a bowl.

That even became her credo.

In 1982, Klaus Michael Grüber asked her in “Hamlet” that she should simply be “a vessel”.

This corresponded to their approach.

For all the purity law that this actress embodied, she was not immune to the effects of a neglected change of subject.

When she was supposed to embody Arkadina in Luc Bondy's “Möwe” in Vienna in 2000 - and finally played it very successfully - she reacted concerned and reserved.

Because it should be her "first unsympathetic figure", she said.

The excesses of wine and howling Jutta Lampes in everyday rehearsal at the Schaubühne are also legendary.

Her sensitivity was not an act.

She did psychotherapy in order, as she said, "to come to terms with herself".

In addition, she was able to take a very firm stand for or against a theater that she knew from an avid perspective.

Of course, her heart was attached to the co-determination model of the old Schaubühne.

Even if their democracy mostly only confirmed discursively what the boss, Peter Stein, had decided apodictically.

Jutta Lampe confessed frankly and unprotected that - despite the admiration of a theater star - she had never succeeded in making films.

Because that would have been her heart's desire - on the trail of her colleague Bruno Ganz.

The latter, however, soberly said that the secret and the charisma of her stage presence were only inadequately transferred to the screen.

Only one film director trusted her

Margarethe von Trotta put her cinematic trust in her (in “Schwestern”, “Die Bleierne Zeit” and “Rosenstrasse”).

To the rest of the film guild, she seemed too aloof.

Too close to the theater.

She was honest enough to admit this insult.

And yet couldn't get over it.

Her trip to television (“Familienkreise”, 2003 with Götz George) remained an isolated incident.

When the old Schaubühnen ensemble was dissolved in 1999, it had become homeless.

She explained this by saying that the word is being mistrusted too much in the theater today.

And that her (Stanislavski's) method of fully identifying with her roles has gone out of style.

Joint work with Edith Clever, her old Schaubühnen counterpart, resulted in the Botho Strauss piece “The One and the Other”, which is dedicated to both (Berliner Ensemble 2005).

Jutta Lampes 'wish to play in Vienna also came true all too temporarily with Strauss' “The Similar” and “Möwe”.

One last membership in the Schauspielhaus Zürich ended without luck (2005–2007).

It was already noticeable here that the creeping retreat of this delicate theater animal was also accompanied by a wear and tear.

Finally she retired to her apartment in Berlin-Charlottenburg.

She has been single since breaking up with her American boyfriend.

As for the date of birth of Jutta Lampes, it must be assumed that she started cheating early.

Her increasing dementia - Jutta Lampe hadn't reliably recognized good friends for years - was the tragic effect of that age that you couldn't tell.

For generations of stage fans, Jutta Lampe was a declaration of love for the theater.

She was unique in that.

In her exquisite vulnerability she seemed a triumph.

About bitterness and earthly gravity.

You could say she was one of the great poets of the theater.

Jutta Lampe has now died in Berlin at the age of 82. 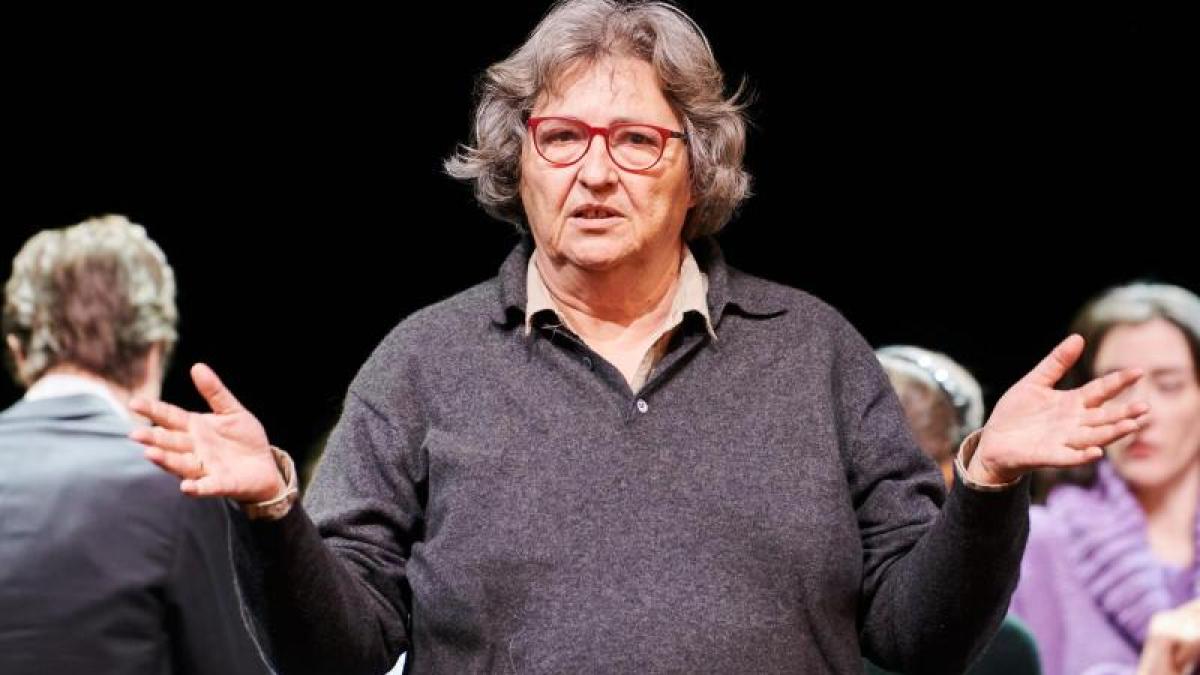 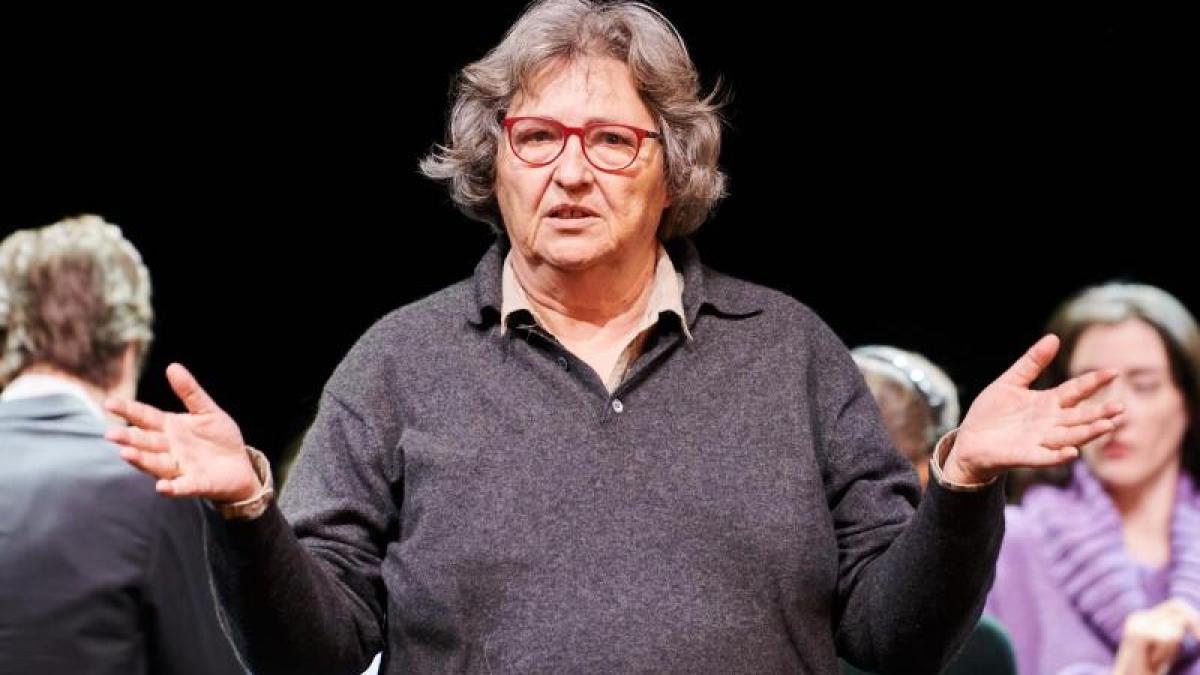 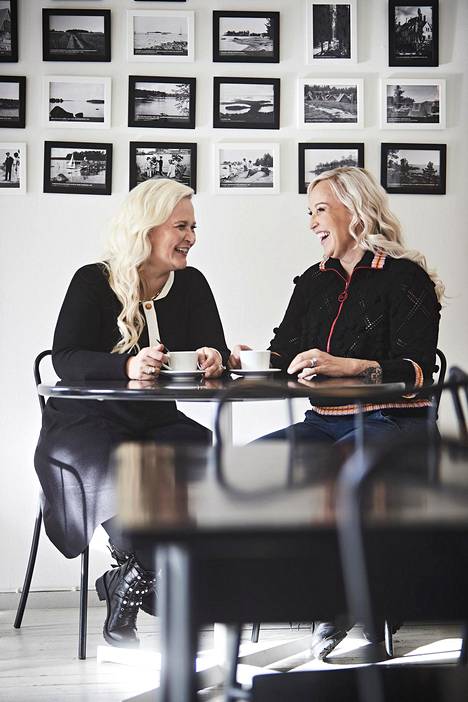 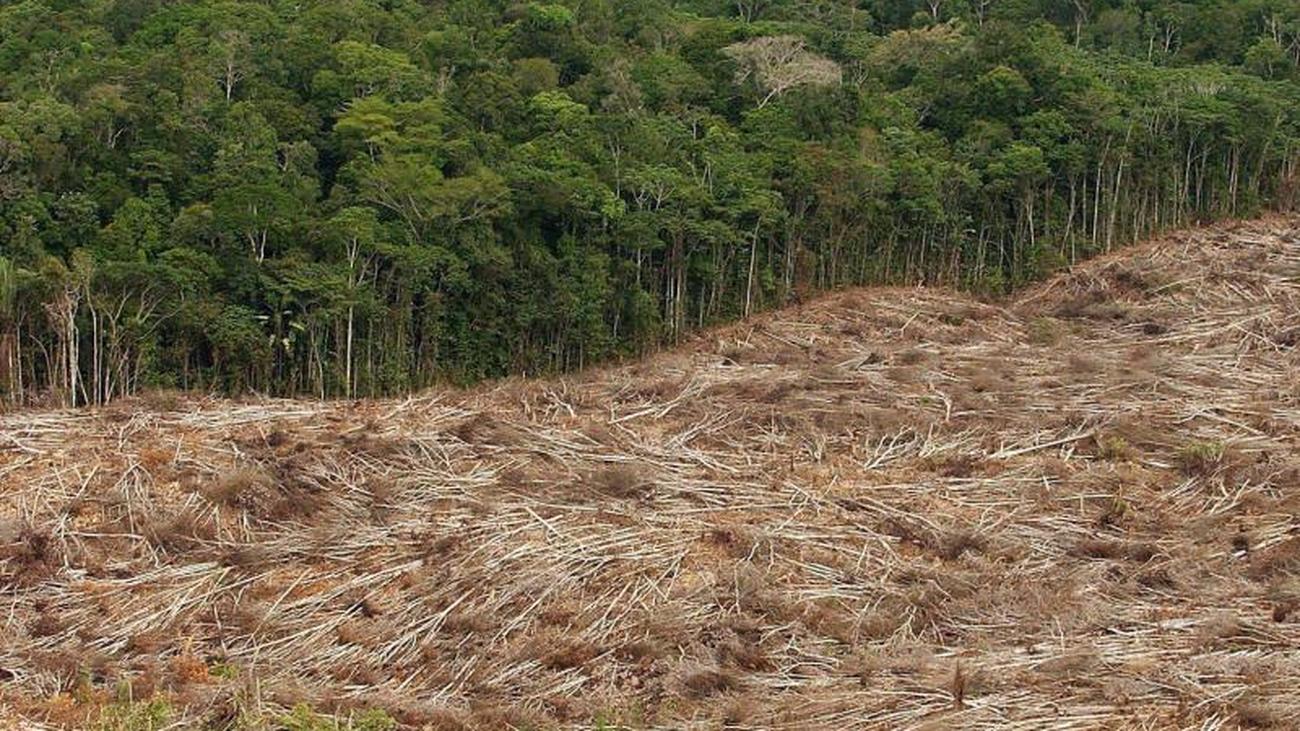 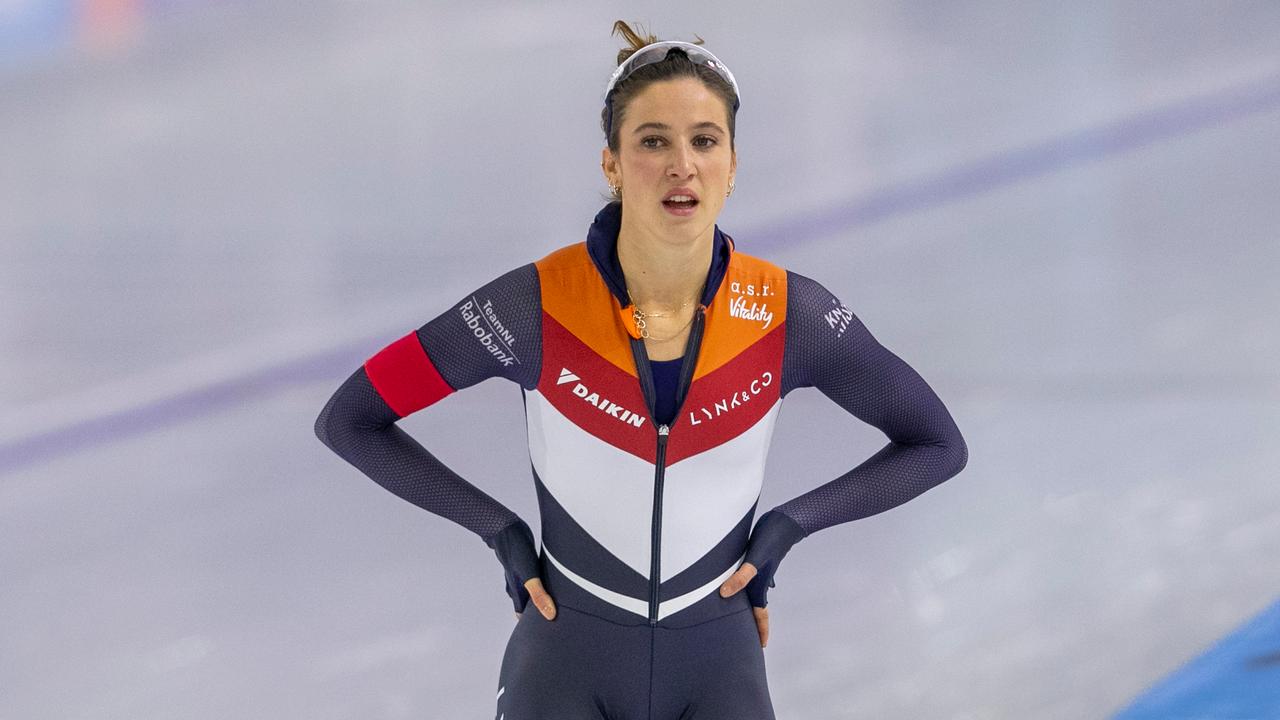 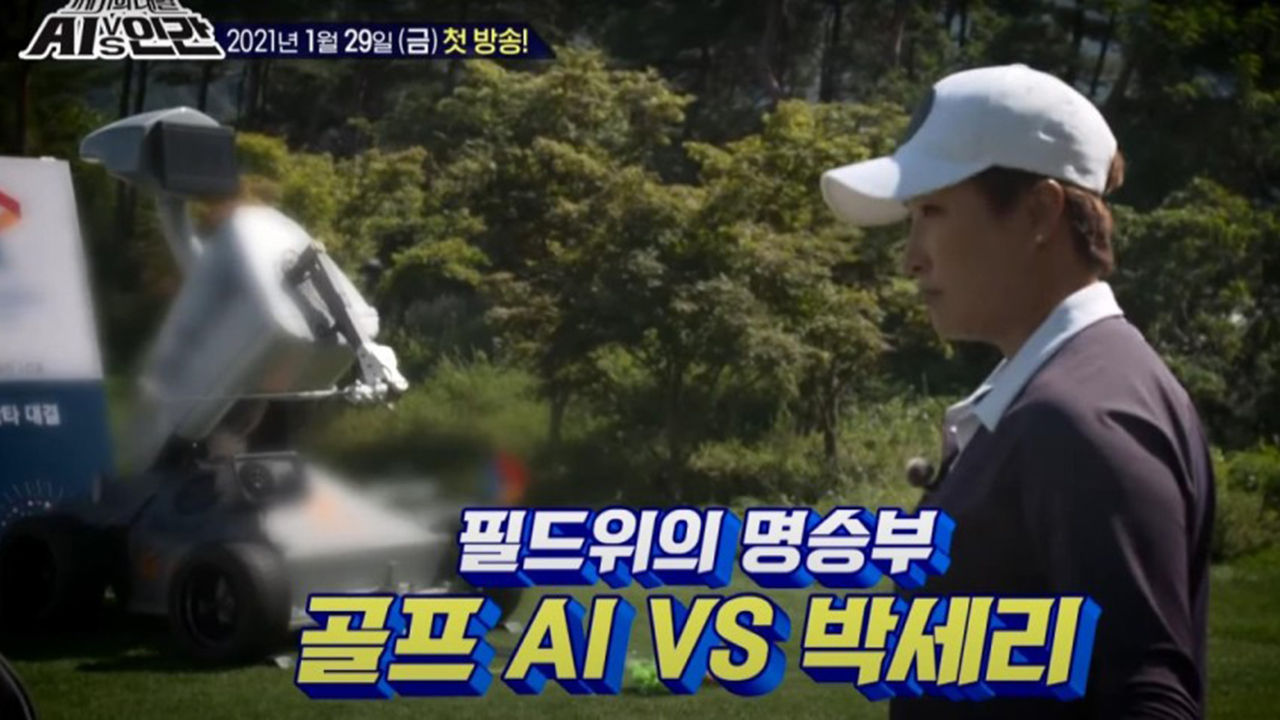 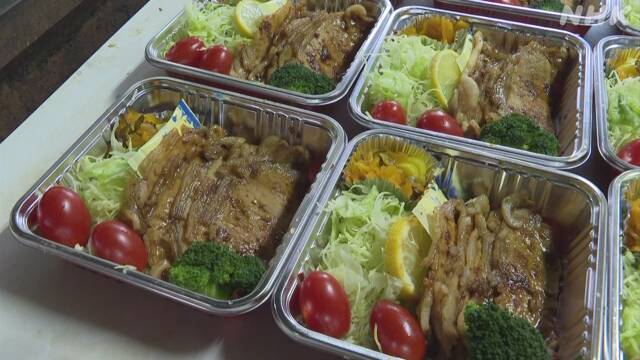