Numbers of kittens and dogs congregate in front of Omani Maryam Al Balushi as she distributes sweets from her bed in her home in the capital, Muscat, where she lives with about 500 pets that she saved from the streets and diseases. 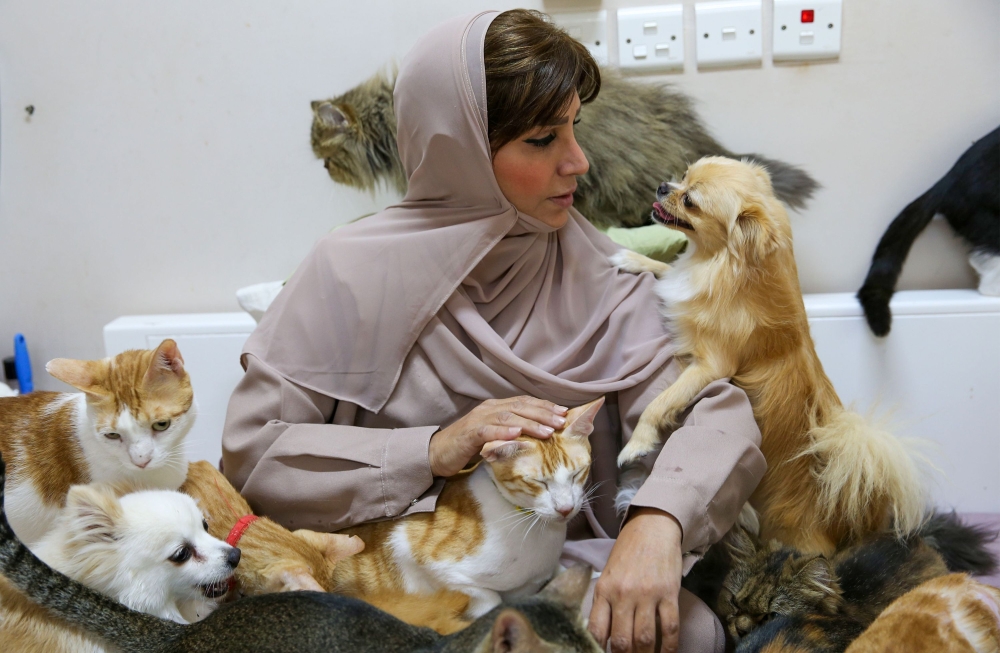 Numbers of kittens and dogs gather in front of Omani Mariam Al Balushi as she distributes sweets from a bed in her home in the capital, Muscat, where she lives with about 500 pets that she saved from the streets and diseases.

Despite complaints from neighbors and the increased expenses, Al Balushi, 51, says that living with 480 cats and 12 dogs on the ground floor of her two-story house helped her overcome the harsh conditions she had been through in her life. "She found that animals, especially cats and dogs, are more reliable." Of human beings. "

"They have become my world, my love and my happiness. I sleep, eat, drink and play with them to the point that I gave up all kinds of entertainment, entertainment and even television with them because of them," Al Balushi stressed, while the animal sounds were louder near her.

But al-Balushi, a mother of two young men who live on the first floor of her house, spends 7 thousand and 800 dollars a month to take care of her friends of cats and dogs, of which 17 were blind, so she feeds her and takes care of her hygiene and takes her to the vet whenever she needs to.

Most of the animals in her home are homeless cats and dogs. They live in large cages and allow them to leave them at certain times to play.

The beginning for the Omani mother was in 2008, "when my son bought a kitten. Although it was beautiful and fluffy, I was like many mothers who refused to raise animals and did not like them."

But about two years later, "I repeated the experiment again and bought another cat that was not clean (...) so I found myself completely interested in it and spending a lot of time with it."

The news of the Baluchi's love for animals spread widely, and expatriate travelers were leaving their pets on her doorstep.

In 2014, she bought her own house and began to increase the number of animals that live with her, saying that during the beginning of her life she was affected by a former neighbor who was feeding homeless animals on a daily basis in front of his house.

The mother asserts that living with 500 cats and dogs helped her out of depression at different stages of her life.

"I was like someone at the bottom of a well and did not know how to get out of it, and (the animals) were like a lifeline or the bucket that pulled me from the bottom of the well," she said.