Many challenges imposed by the Corona pandemic on the publishing industry in the world, as the closure period affected the book, as well as many areas, in addition to the cancellation of local and international exhibitions, and the decrease in library sales by 80%, according to publishers who confirmed to Emirates Today. The pandemic has left behind 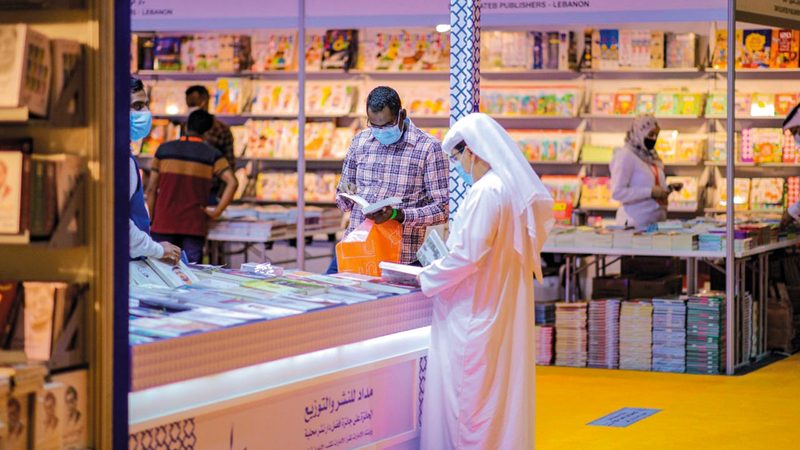 They affirmed that it helps to overcome the repercussions of the "pandemic".

Many challenges imposed by the Corona pandemic on the publishing industry in the world, as the closure period affected the book, as well as many areas, in addition to the cancellation of local and international exhibitions, and the decrease in library sales by 80%, according to publishers who confirmed to Emirates Today. The pandemic has created difficult situations and repercussions. They hope that the Sharjah International Book Fair - which is the first realistic international fair since the crisis - will be a gateway of hope to overcome it, and to turn the wheel of the popularity of publications again.

A number of publishers participating in the 39th edition of the exhibition, which will continue until the day after tomorrow at the Expo Center Sharjah, added that there is another face to the crisis, which is the search for alternatives, and seriously thinking about electronic options, and others.

Regarding the repercussions of the pandemic on the book industry in the UAE, in particular, Hassan Al Zaabi, founder of Medad Publishing and Distribution House, says: “Despite the negative aspects of this crisis on the cultural sector, it has pushed us, honestly, at least 10 years forward, as it made us look at Its dimensions and we look forward to our future, ”explaining,“ Today we are talking about the importance of the project to convert to electronic publishing, which, although it exists within the nearby Medad projects, will inevitably push us to urgently implement it to keep pace with technological development, and to confront a reality full of challenges that forces us urgently to devise appropriate solutions and alternatives. Promote publishing reality ».

Al-Zaabi added, “In light of the pandemic, almost all the wheels of the publishing sector were suddenly disrupted, with local and international exhibitions halting, and libraries returning large numbers of publications, so it was necessary to move towards the electronic sector, and indeed, once the decision was made to switch to (Jarir Reader) by a percentage 70%, which we took in (Medad) last January, doubled requests for books to the house to compensate for the shortfall imposed by the crisis, which encouraged us today to establish a digital channel specialized in electronic selling that includes audio and electronic copies, which will be launched soon.

For his part, Ahmed Nassif, representative of the Egyptian Arab Book House, believes that the publishing sector in Egypt has been affected by 70% by this crisis, considering that “the publishing houses in Egypt and the Arab world have struggled from March to last September to continue, due to the repercussions of Corona. The great economic difficulties that followed, the negative impact of which was exacerbated by the decline in book sales, the cessation of all exhibitions and external outlets to distribute the book and the decrease in internal demand, in addition to the inability to distribute the new publications of the house in 2020, which put many of us at risk of collapse.

On the other hand, the alternatives to electronic selling did not appear - according to Nassif - at the level of dealing with the crisis: “The electronic sector covered a small part of the problem, but it did not achieve profitable profits, but rather covered some of the house’s expenses, in light of the doubling of people's fears at that time from the transmission of infection through paper. Books, which greatly affected the resources », noting the value of events in support of the publisher, especially international exhibitions, such as the Sharjah International Book Fair, which he considered the most appropriate interface for interaction and exchange between the various elements of this industry.

On the alternative plans for publishers in Egypt to confront the second wave of the epidemic, and the risk of closures again, Nassif asserts, “Despite the absence of government support for publishers in Egypt, we had opportunities for internal exhibitions, such as Alexandria, Mansoura and Cairo later, which we considered a display platform that could help us overcome the crisis. , However, we are still required to strive, move and be prepared to confront the crisis, so that many of the names active in the field do not disappear.

Wadad Samir Al-Dairi, from the Lebanese website "Neel Wafrat", the largest Arab digital library, does not seem pessimistic in talking about the implications of the Corona pandemic on workers in the book sector, after confirming that isolation imposed on many readers the option to resort to electronic purchase. It contributed to creating a boom in digital libraries, in contrast to the traditional one that witnessed a significant decline in the processes of buying, printing books, marketing and selling new publications.

With regard to the quality of books that have witnessed a turnout in the last period, Wedad points to an increase in the sales of academic references for distance study, human development and self-development publications, while novels and stories have maintained their prominence, as they are the most and most important sources of inspiration and knowledge that have been shown to help Many people have overcome the closure crisis and the absence of social life.

For his part, the director of the Mamdouh Adwan House for Publishing and Distribution, Marwan Adwan, pauses on the issue of the deterioration of the Arab book industry, and the impact of the existing publishing sector in essence on the publishers' participation in local and international exhibitions, considering that electronic selling solutions in the Arab world are limited in effectiveness due to the weakness of distribution networks and the lack of The ability of Arab libraries to deal with protracted crises, as happened in the Corona pandemic, which caused huge losses to the sector.

"In light of the weakness of distribution networks in the Arab world, the crisis of closing borders and the inability to ship new books imposed a major crisis for libraries that were carrying out the task of delivering the book to the reader throughout the year, and if we spoke in the language of numbers, we would find that the book fairs sector was disrupted with the onset of the pandemic," Adwan added. Since the Muscat International Book Fair last March until today, with a breakthrough in the launch of the Sharjah International Book Fair, which is the first Arab international fair to be held since the outbreak of the pandemic.

On the experience of the house, Adwan added, “Through our participation in the Sharjah exhibition, we were able to issue half of the books scheduled for this year, after we apologized to a number of writers and translators for postponing many of the existing projects to next year, hoping that life would return to normal and we can participate, as in The previous, in the series of Arab and international book fairs ».

With another view, the owner of the Muskeliani publishing house in Tunis, Shawky Al-Enezi, looks at the pandemic “it is a test not only for a person who is accustomed to the noise of cities and avoids self-isolation, but for the real publisher who will be prompted by the crisis to think about new non-traditional distribution tools, such as virtual exhibitions and electronic selling. Which can provide effective solutions, provided that the principle of protecting the intellectual property rights that the publisher and author suffers alike in the Arab world are met.

“We still suffer from the problem of chaos and infringement of intellectual property rights, which constitutes an assault on the efforts of the publisher and the author at the same time. I believe that the step that Saudi Arabia started a few days ago by besieging pirates and removing all illegal platforms, is something that can be generalized to include all Arab countries. ».

On the future of publishing in the Arab world, Al-Enezi emphasizes the intersection of the profession of the publisher with other professions in the field of printing and distribution, “as many practice the profession of printing and claim to be publishers, while the real publisher is the one who works on the book in revision and revises it with its author, to deliver its final copy to the reader. », Pointing out that this crisis is a test for the true publisher, which Al-Enezi considers less affected by the Corona pandemic compared to“ the fake printer or publisher ”, as he put it, because the first has readers who trust his options and seriousness, as well as their levels that have been built over long years of hard work. To provide the best.

Hassan Al Zaabi: The recovery is near

The founder of the Emirati Medad Publishing and Distribution House, Hassan Al Zaabi, affirms the value of the moral support that the publishing sector and the book industry receive continuously from the leadership, its relentless efforts and its keenness on progress and development that he sees with gratitude, indicating the value of the move to support the government's efforts in this direction.

And he adds: “I am confident that the culture sector will recover soon, to come back stronger than before, and the Sharjah International Book Fair today, which is considered the first international book fair to be held after the (Corona) crisis, is only a catalyst for publishers and a challenge to the crisis, and a clear announcement of the bets of the permanent leadership. On culture and knowledge, what doubles our individual responsibilities as publishers, the necessity of commitment to support and install them on the ground.