Chinanews client, Beijing, November 5th (Reporter Shangguanyun) Do you still remember the "Vulcan Mountain Girl" Anian? Her real name is Wu Shangzhe. In February of this year, in order to take care of her grandmother who was infected with the new coronary pneumonia but resisted treatment, she applied to move from the shelter hospital to the Huoshenshan Hospital. The story of her and grandma has 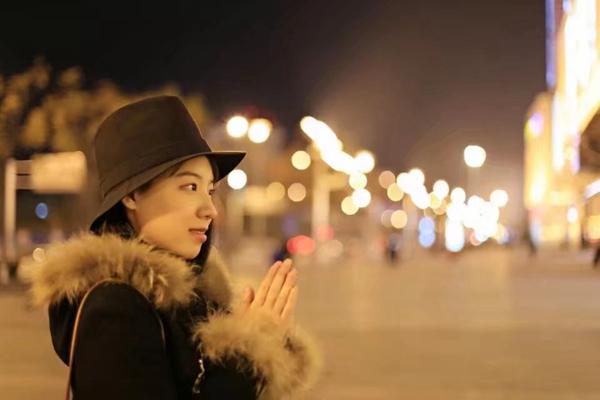 Her real name is Wu Shangzhe. In February of this year, in order to take care of her grandmother who was infected with the new coronary pneumonia but resisted treatment, she applied to move from the shelter hospital to the Huoshenshan Hospital.

The story of her and grandma has touched countless people.

In this book, Anian recorded everything from illness, hospitalization to accompanying grandma.

A few years ago, Anian took a photo on the streets of Wuhan.

Anian is a screenwriter and works in Beijing.

At the beginning of this year, when the new crown pneumonia epidemic raged in Wuhan, the Anian family was unfortunately recruited.

On February 19, in order to take care of her grandmother, she applied to move from the Fangcang shelter hospital to the Huoshenshan Hospital.

Before going, she promised her mother, "I will definitely bring your mother back safely."

"Grandma was not very happy when she saw me, but was very angry, and told me not to come over and go a little further." Looking back now, Anian knew that grandma was kind.

She comforted the old man over and over again, learning to take care of her grandmother a little bit.

After being widely reported by the media, many people learned about the story of Anian and her grandmother, "brave" and "kindness"... These are high-frequency words in the comments of netizens.

"It seems to have matured overnight." Anian felt that she became a person that her parents could rely on. "This is a kind of recognition."

However, in the early morning of March 6, Anian's grandmother died unfortunately after full treatment.

She and her parents donated her grandmother's body in compliance with the old man's wishes.

She seldom exposes her negative emotions, "But when my grandma passed away, she still couldn't help posting to Moments: Do you know what it feels like to be powerless after trying your best? I know." This has also become Anian's heart forever Regret.

A girl who smiles often

"A girl who smiles often" is what many people think of Anian.

But she said, it is not.

"I'm usually relatively fragile." Anian said, "Sometimes I love to cry. Especially at the beginning of this year, when our family went for a test, it was very painful. I wondered over and over again how this matter would fall to my house. "

She mentioned a trivial matter, “I didn’t know about the new coronary pneumonia at the time and thought I was dying. Before entering the Fangcang shelter hospital, I seriously said goodbye to everyone.” Later, she began to record in the Fangcang cabin by taking a video. Hospital life.

Sometimes, when facing the camera during interviews, some questions were painful to answer, and Anian desperately held back tears, "I just looked up and didn't want the tears to fall, but it seemed that I was rolling my eyes."

When she was a child, Anian was held in her arms by her grandmother.

"Many people told me that I saw an optimistic and positive attitude. I think there is no need to talk about the pain at this time. You should let everyone see the warm side and feel the confidence and strength." She said.

Let life go back to where it used to be

However, many emotions can be concealed, but there is no way to escape.

Since childhood, Anian and her grandmother have had a very good relationship.

The death of her relatives brought great changes to her life.

When the situation allowed, she chose to return to Beijing to continue working, “I was evading subconsciously. Every day in Wuhan, I would be touched by the scene and feel that many things are different from before.

At the beginning of October, Anian returned to Wuhan for the holiday.

"Looking at the busy traffic in Wuhan, I suddenly felt like a world away." She said that she had had nightmares before, and when she woke up, she would be thankful that it was just a dream. "I wish that the experience during the epidemic was just a dream. Everyone is fine. "

She and her parents are working hard to return to the track of their previous lives.

As a screenwriter, Anian used to write mostly sweet pet idol dramas, but now he has begun to pay attention to social themes, and he is writing a medical drama.

"When I was writing a script, I couldn't help but watch a lot of content on the theme of life and death. It was painful, but I thought that after experiencing life and death, I would have a new understanding of life." She said.

Anian is also silently planning her own future, "In the future, if I can have three or five works, everyone can see the emotions I hope to express, even if I can experience part of it, as long as I really want to talk about it. Yes, I feel very contented."

As the emotions gradually calmed down, Anian had an idea that became stronger and stronger, and that was to write down her true experience.

Not long ago, she wrote the 160,000-word "Wuhan Girl Anian's Diary", recording her life from illness, hospitalization to accompanying her grandmother.

Also in the book, people can see from another perspective how many medical staff are doing their best: they shed tears for Wuhan, and they also fought hard for Wuhan.

She flipped through Weibo and Moments, repeatedly checked, and tried to write every time point accurately.

But this book, Anian, was still a bit difficult to write. Sometimes he could only write about a thousand words all night, and he would lose a lot of hair.

"Reminiscing about the past is sometimes painful. Do you know?" She asked herself, "I used to write a script, I can use words to build a world I want. But writing this book can't be fictional, I can't let grandma be Come to life in the book."

But she hopes that the content of this book can convey warmth and strength; and time is good at taking away memories. "I also hope that it can make people'remember'."

In the book, Anian wrote, "I remember the pain and tears that really happened, those frozen people; I will also remember the figure who went forward to save lives in this war without gunpowder. "(Finish)