The Sheikh Zayed Book Award participated in the virtual program of the Frankfurt International Book Fair, which was held under the slogan "We are all together now", in two virtual sessions to shed light on a number of issues of concern to the literary scene in the Arab world. 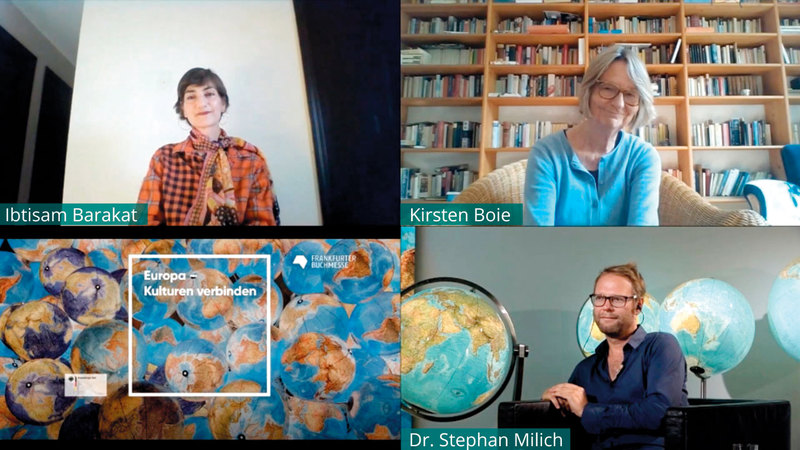 Two sessions were organized during the virtual program

During the child literature session between the Arab world and Europe.

The Sheikh Zayed Book Award participated in the virtual program of the Frankfurt International Book Fair, which was held under the slogan "We are all together now", with two virtual sessions to highlight a number of issues of interest to the literary scene in the Arab world.

The Secretary-General of the Sheikh Zayed Book Award and Chairman of the Abu Dhabi Language Center, Dr. Ali bin Tamim, said: “We are pleased with the annual participation of the Sheikh Zayed Book Award in the Frankfurt International Book Fair, albeit hypothetically this year, as the Corona pandemic continues to impose challenges and restrictions on The literary sector and other sectors, and we must work together to overcome these restrictions, and turn challenges into opportunities to achieve the interest of all workers in this sector.

He added: “The Frankfurt Book Fair, which was held from October 14 to October 18, is one of the most prominent literary events in the world, and the award has consistently participated in it year after year, due to its prominent position, as it provides a global platform that brings publishers, authors and readers together under one roof, to exchange experiences And to see the latest work and trends in the publishing and authoring sector ».

The award organized a session entitled "The Arab World: Great Potential Awaiting Discovery" on the 13th of this month, with the participation of Margaret Obank, publisher of the British magazine "Banipal", which won the Sheikh Zayed Book Award for the year 2020 on the publishing and cultural technology branch, and was interviewed by the publisher of the American magazine "Publishing Perspectives", Hannah. Johnson.

Margaret Opank said: “Arabic literature is characterized by diversity, but the absence of translation in the past prevented many Arab authors from publishing their works in other languages, and this was one of the reasons for establishing Banipal Magazine, as we translated works by a number of Arab writers whose works were not previously translated,” she added. Today we noticed a growing demand for publishing the works of Arab writers, especially among independent publishers, and here comes the role of literary prizes, such as the Sheikh Zayed Book Award, to highlight the importance of literary translation, as our magazine received a lot of media attention after winning the award, despite Its existence since 1998 ».

On the 16th of this month, the award organized a second virtual session, in cooperation with the German Literature Foundation, under the title “Child Literature between the Arab World and Europe,” in which the Palestinian-American writer, Ibtisam Barakat, winner of the Sheikh Zayed Book Prize 2020 for the Child and Adolescent Literature Branch, participated in it. And the German writer, Kirsten Bonn, who won a number of awards in children's and young people's literature, and the German Arabist dialogue was moderated by a member of the Letbrom Cultural Foundation, Dr. Stefan Milch.

The session revolved around the challenges and limitations facing writers specializing in children's literature, and how to present topics related to the global scene today in a way that is appropriate for children, and paints a positive image of the world around them.

Ibtisam Barakat saw that childhood is a world that unites all human beings: “Childhood unites us all. Every one of us was a child one day, and what distinguishes childhood most is the freedom of thinking, imagination and love of exploration, far from the restrictions that adults suffer, and this is what motivated me to write for children. I want to protect This freedom and imagination enjoyed by children ».

German Kirsten Boone agreed with writer Ibtisam Barakat about the importance of childhood in shaping the personality and thought of the writer, adding in her discussion of the challenges related to writing for children: “There is no topic that we cannot discuss with children, but the most important thing is how to discuss this topic in a manner that suits their abilities. Without burdening them with negative details that paint a dark picture of reality, the writer should give them hope away from the traditional concept of a happy ending to unleash their imaginations.

The authors agree that being able to see hope in life is an important tool for children and adults alike.

Banipal magazine publisher Margaret Obank said, “The Sheikh Zayed Book Award has contributed to bringing about change in Arab book fairs. Every year, award winners are announced prior to the launch of the Abu Dhabi Book Fair, to make room for the literary community to celebrate them during the exhibition. From seminars and sessions to highlight the winning works, and the career of these writers.

• “The award has been participating in (Frankfurt Book) year after year, due to its prominent position and its being a global platform for publishers and authors.”

• “What distinguishes childhood is the freedom of thinking, imagination and a love of exploration, far from the restrictions that adults suffer”.