This show pays tribute to the "loveliest person". Which scene have you moved by?

Chinanews.com, Beijing, October 25. On the evening of October 24, China Central Radio and Television Station broadcasted "Heroic Sons and Daughters-A Gala to Commemorate the 70th Anniversary of the Chinese People's Volunteers to Fight the United States and Aid Korea." The whole evening show runs through the drama line of the couples Chrysanthemum and Qiangzi played by Zhou Dongyu and Jia Nailian 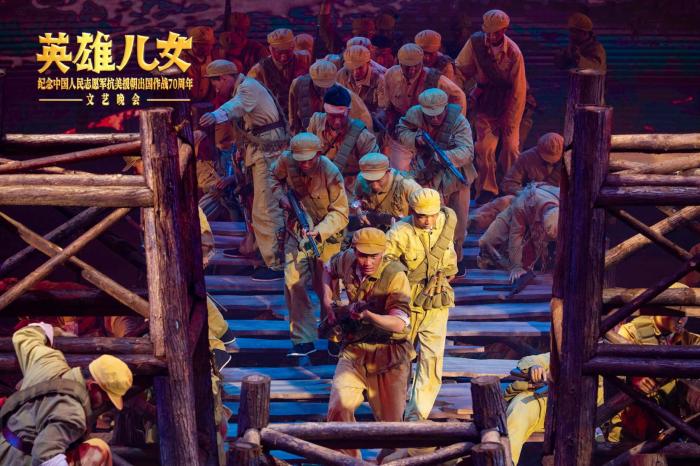 Chinanews.com, Beijing, October 25. On the evening of October 24, China Central Radio and Television Station broadcasted "Heroic Sons and Daughters-A Gala to Commemorate the 70th Anniversary of the Chinese People's Volunteers to Fight the United States and Aid Korea."

The whole evening show runs through the drama line of the couples Chrysanthemum and Qiangzi played by Zhou Dongyu and Jia Nailiang, connecting symphony, recitation, opera and other artistic expressions, presenting the audience a scene of magnificent and magnificent heroic epics on the battlefield of the War of Resistance Against America and Aid Korea.

Seventy years ago, the Chinese People's Volunteer Army, composed of outstanding Chinese sons and daughters, shouldered the great trust of the people and the expectations of the nation. It held high the banner of justice for defending peace and resisting aggression. It was majestic and proud and crossed the Yalu River.

As the symphony chorus "The Battle Hymn of the Chinese People's Volunteers" sounded, a magnificent historical picture unfolded.

On the stage of the scene performance "Fire at Me", Wei Daxun played Huang Jiguang's comrade Li Jide, telling the audience the story of the super hero Huang Jiguang before his death. The most touching scene was the moment when the lights gathered on the old man Li Jide.

Han Xue led the scene chorus of "My Motherland". A familiar melody sounded. In the tunnel, the volunteers and soldiers sang loudly and sang their infinite love for the motherland.

Covered with snow armor and hung ice on its head, the "Ice Sculpture Company" stands in the wind and snow. The extreme cold environment did not allow the volunteers to relax their grip on their long spears. He Bing and Zhu Yawen are telling the scene in "Ice and Blood Changjin Lake" Tell me about that history.

In the fifth act "Reunion", the stage reproduces the scenes of famous writers and artists visiting North Korea for condolences. In the music and applause, the chrysanthemum played by Zhou Dongyu passes through one soldier after another, looking for her husband who has not heard from him for a long time... Soldiers and their families care about each other and look forward to it. One day, they will sing "Smile Victory" and look towards the peaceful sky.

In terms of the stage performance of the party, the 9-meter-high stage with a steep slope of 30 degrees is quite spectacular, which poses no small challenge to the performers who perform with heavy loads.

The students from the Tagou Shaolin Martial Arts School in Henan Province overcome the danger of slipping and use realistic body language such as jumping, running, and fighting to show scenes in the war. In terms of props, the main creative team went to the Shenyang Anti-US Aid Korea Memorial Hall for many times to collect materials and create. The chess, playing cards, and peace doves carved from bullet shells in the movie, the tunnels of Shangganling, and the wooden bridge over the Jingangchuan railway are all vivid.

Talking about the original intention of the whole evening party, the director team expressed that it hopes to allow the audience to learn more about the heroic deeds of the volunteer soldiers during the War to Resist US Aggression and Aid Korea, and show them to the "loveliest people" through stage art and lens. pay tribute.