The new season of "Reader": An interview with Tao Yong and Dong Qing made people cry

Chinanews client, Beijing, October 22 (Ren Siyu) "She told me in dialect that she wanted to make a shroud for herself." A few days ago, an interview between Tao Yong and Dong Qing made many people cry. .   In the new season's "Long Reader" pilot program, Tao Yong, chief physician of the ophthalmology department of Beijing Chaoyang Hospital, walked into the reading pavilion, read "The World of S 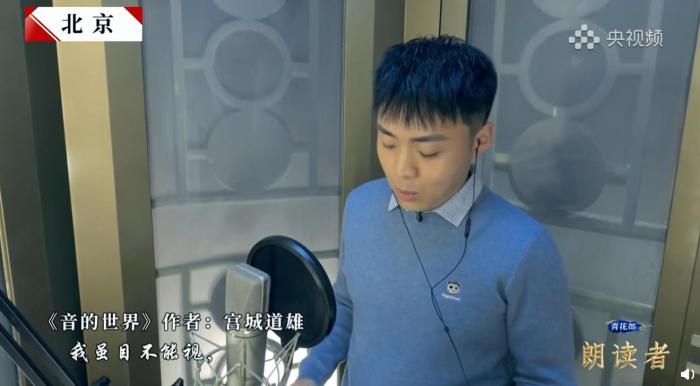 Chinanews client, Beijing, October 22 (Ren Siyu) "She told me in dialect that she wanted to make a shroud for herself." A few days ago, an interview between Tao Yong and Dong Qing made many people cry. .

In the new season's "Long Reader" pilot program, Tao Yong, chief physician of the ophthalmology department of Beijing Chaoyang Hospital, walked into the reading pavilion, read "The World of Sound" written by Miyagi Michio, and gave it to his friend Weiwei who had become ill. .

Last year, Dr. Tao Yong, who helped many people to see the light again, was chopped by a patient. The nerves in his hand have not yet healed. Now, he is still working in the office. He said that when the danger came, a patient’s My mother and the three doctors fought hard to stop him, "When I think of all this, I feel very warm and supportive, so I think it is safest to be there."

During the interview, he talked about a patient’s story: Grandma Wang was blind for many years, had late cataracts, had an almost 90-degree hunchback, had a large abdomen, and his life had entered the countdown... Just when Tao Yong was hesitant to have surgery, Wang The grandmother said something: I want to make a shroud for myself, so that "you can only see her relatives when you go there."

As a result, Tao Yong determined to overcome all difficulties to perform surgery on Granny Wang, and successfully helped her restore her 0.6 vision.

Later, Granny Wang passed away one week after the operation.

"Grandma asked the contact person to tell me that she hasn't seen anything by herself all these years. She is very lonely in the dark and wants to go home. Thank you for helping her find her way home."

After telling the story, Tao Yong said: "In fact, since then, I am more brave than before."

In the comments, many netizens said, "I'm crying," "Doctors are kind," and "Doctor Tao is a gentle and kind person in his bones. I hope he is healthy and healthy and bring hope to more people."

In addition to Doctor Tao Yong, there is also a doctor's story in the video that made the audience cry.

This year's Spring Festival, Wuhan doctor Peng Yinhua and his wife Zhong Xin should have held a wedding that was delayed for more than two years, and they were about to become a happy dad... But on February 20, Peng Yinhua, who was infected with the new crown virus at work, died because of ineffective rescue. .

After more than three months, their daughter was born on June 1st, nicknamed Liuyi.

In front of her daughter’s crib, Zhong Xin read aloud her expectations for Children’s Day: “Like you, I don’t know what else is left in the future. I really want to block the wind, rain and confusion for you, so that you can only see the rainbow in the sky until there is One day you also become me..."

What is different from the past is that in addition to the TV program, the program team specially created a "one square meter" live broadcast event to tell everyone the story in the reading booth.

This live broadcast event was held in three cities, except for Beijing and Xiamen, the other city was Wuhan.

The first reader to enter the Wuhan Reading Pavilion was Cheng Lin, the wife of Zhang Dingyu, who won the national honorary title of "People's Hero".

During the epidemic, Cheng Lin was infected with the new crown virus and received isolation treatment. Zhang Dingyu, who was fighting on the front line of the epidemic, sometimes did not pay attention to his wife for three or four days. When talking about his own frostbite, Zhang Dingyu was not afraid of it, but mentioned His wife’s condition, he said, he cried with fear on the way to see his wife.

Once, Zhang Dingyu was separated from his wife by participating in a foreign aid medical team. In two years, he wrote more than 120 letters, and his wife numbered these letters one by one.

Zhang Dingyu once wrote: "Sorry Cheng Lin, but I didn't write to you on time. I'm sick and have a sore throat... When people feel unwell, they miss home. When they feel unwell at home, you will always take care of you and act like a baby in front of you. , Now everything is a luxury to me..."

Reading aloud in the pavilion, Cheng Lin read Xi Murong’s "Home with Lights": "Actually, what we ask for is so humble. All we want to have is a small lighted house like this. A small lighted home."

In 2020, too many unforgettable stories have happened in the city of Wuhan.

A few months ago, a picture of a Fangcang shelter patient reviewing the college entrance examination was circulated on the Internet. Huang Yuting, a 17-year-old Wuhan girl, unfortunately contracted the new crown pneumonia before the college entrance examination. At the Fangcang cabin hospital, a policeman named Pan Tong was on duty. Always enlighten her and accompany her to prepare for the exam.

To Huang Yuting's regret, she failed to say goodbye to the police when she left the cabin, so she went to the reading booth to read Wang Guozhen's "How Can I Thank You" to express her gratitude.

After several months of fighting the epidemic and watching and helping each other, people in this heroic city have too much to say.

Reader Luo Songhua used to be a patient with new coronary pneumonia and recovered with support from various sources. She read a poem written by herself, "The Waiting for 76 Days":

Luo Songhua hopes that he can take this opportunity to give strength to his rebirth, a surprise to his dear children, and a blessing to his hometown of Wuhan.

This spring, Zhang Qi originally went to Xiamen with his family on a trip, but as soon as he arrived at the destination, he received news that Wuhan was closed.

When they first arrived in Xiamen, they were unfamiliar with their birthplace. Many locals provided them with warm help. Liu Weiming prepared a special New Year’s Eve dinner for Zhang Qi’s family on New Year’s Eve. When Zhang Qi and the others could return, "Wei Ge" also specially Make hot dry noodles.

They read together: "People and people, as long as they have eaten the fruit of a tree together, drink water from a river together, or bear the wind and rain in a place together, no matter if they are separated by time or space. How far away, each other will feel kind of kind."

In fact, in previous programs, there were not many pictures in the reading booth. Dong Qing said: "I often face tens of thousands of hours of the material of these readers alone. One person sheds tears and one person laughs. That's how things are. If you never forget, there must be a response. The time has come to 2020, and now that live broadcast has become a new media outlet, we have set foot on the outlet."

In this season's live broadcast, the perspective was cast more on ordinary people.

Plain poems, short letters, vivid daily stories... When the readers in the reading pavilion earnestly express their thoughts to those concerned, the audience in front of the screen will always comment on "warm" and "feeling healed" .

This is not only the meaning of classic literature, but also the touch of people's true feelings.

The reading pavilion is only a small one or two square meters, but the emotional power born here can resonate with people hundreds of thousands of kilometers away.