According to the Minister, the development of "cyberislamism" must be fought, in particular by better detection of hate content on the net 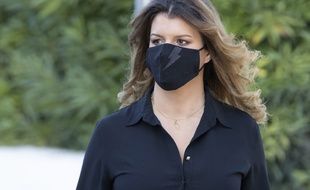 "Cyberislamism has developed", underlined the minister, three days after the beheading in the middle of the street on Friday of Professor Samuel Paty in Conflans-Sainte-Honorine, leading to a questioning of social networks for having relayed the messages stigmatizing the professor of history.

In this context, Marlène Schiappa went to the sub-directorate of the fight against cybercrime which houses the Pharos reporting platform intended for the general public.

It is this platform, set up in 2009, which identified the 80 messages of support for the action of the aggressor of Samuel Paty.

“The Pharos platform is well identified by the population.

It is a question of seeing how we can improve the articulation between the different services, ”explained the Minister, who brought together senior police and gendarmerie officials to study possible improvements to better detection of hate content on the Internet. Internet.

This Monday morning, the Minister of the Interior, Gerald Darmanin, denounced "an online fatwa".

And the day before, the Defense Council chaired by Emmanuel Macron decided to act against those who supported the attack on social networks.

In Marlène Schiappa's entourage, it is argued that beyond the devices for reporting and blocking illegal content, it is also necessary that the State is not absent from the net and organizes a "counter speech" to respond hate speech.

Currently, reports reaching Pharos are processed by police and gendarmes who, after verification, alert the competent services, so that an investigation can be opened under the authority of the prosecutor.

Often long, however, this device does not allow rapid erasure of content deemed illegal.

Social networks also have reporting mechanisms, but their relative effectiveness is criticized.

Attack in Conflans: LR offers a series of emergency measures, in particular at school