The government will introduce a "weight penalty" for vehicles

It was one of the subjects of tension between the Minister of the Economy and that of the Ecological Transition. But this time, Barbara Pompili wins. The government is going to table an amendment 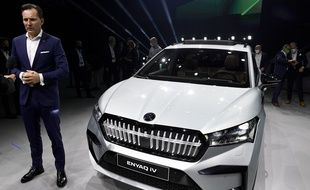 First yes, then no, and finally yes ... The government will table, in the coming days, an amendment to the 2021 finance bill establishing a motor vehicle penalty according to the weight of the vehicle,

In France, only the quantity of grams of carbon dioxide (CO2) emitted per kilometer is currently taken into account for the ecological bonus / penalty applied to cars.

NGOs or deputies - including Barbara Pompili, now minister of ecological transition - have long asked to add, in the calculation, the weight of vehicles, in particular to counter the rise of SUVs (Sport utility vehicles), more massive and generally more CO2 emitters than sedans.

This weight tax was also one of the 149 proposals of the 150 citizens of the Citizens' Convention who proposed the creation of a weight tax of 10 euros per kilo over 1,400 kg.

"In the current economic climate, I do not want no tax increases and I want to protect industrial jobs, factories and the purchasing power of the French", justified Bruno Le Maire, the

There will be an amendment to the finance bill establishing an ecological penalty related to the weight of vehicles, but not going as far as what the citizens' convention proposed.

The threshold retained is that of a tax for vehicles over 1,800 kg, thus indicates

Exemptions are also planned for electric and hydrogen vehicles and adjustments should be made for hybrids and large families.

"A strong and necessary signal", for Barbara Pompili

The weight penalty that we are introducing is a strong and necessary signal to better take into account the ecological footprint of the heaviest vehicles.

Since 2010, the average weight of diesel cars has increased by 7%, and that of gasoline by 14%, or about 100 kg per vehicle, we say in the entourage of Barbara Pompili.

“Vehicle CO2 emissions decreased continuously between 2009 and 2016, then stabilized between 2016 and 2019 despite developments by manufacturers”, due to these increases, adds the same source.

Taxation by weight, parking, supervision of advertising… How does the SUV “hunt” try to organize itself?

Pollution from SUVs: "We must install a penalty directly in relation to the weight of the vehicle"