Nanjing Medical University pronounced on the murder of the girl: May the deceased rest in peace and justice will last forever

Chinanews.com, October 14th. Nanjing Medical University published on the official WeChat account on the 14th the article "The French Open without failing justice will never be absent". The article stated that September 16, 2020, the year of 1992 that attracted much attention The case of the school’s student surnamed Lin was heard in Nanjing Intermediate People’s Court. The Nanjing People’s Procu 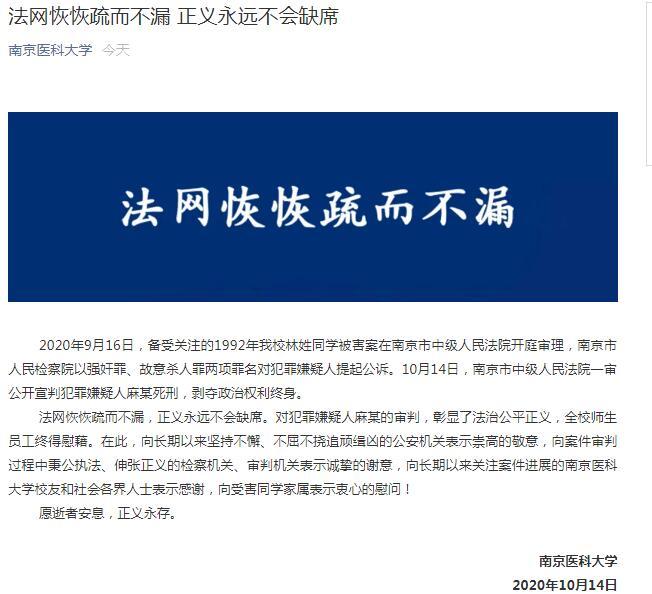 Chinanews.com, October 14th. Nanjing Medical University published on the official WeChat account on the 14th the article "The French Open without failing justice will never be absent". The article stated that September 16, 2020, the year of 1992 that attracted much attention The case of the school’s student surnamed Lin was heard in Nanjing Intermediate People’s Court. The Nanjing People’s Procuratorate prosecuted the suspect for rape and intentional homicide.

On October 14, the Nanjing Intermediate People's Court publicly sentenced the criminal suspect Ma to death and deprived him of political rights for life.

The article stated, “The law network is full of negligence, and justice will never be absent. The trial of the suspect, Ma, demonstrates the fairness and justice of the rule of law, and the whole school's teachers, students and staff will finally be comforted. Here, we will continue to persevere and be unyielding. The public security organs pursuing the stubborn culprits express their lofty respect, sincere gratitude to the prosecutors and judicial organs that enforce the law impartially and uphold justice during the trial process, and express gratitude to the alumni of Nanjing Medical University and people from all walks of life who have been following the progress of the case , I would like to express my heartfelt condolences to the families of the victims!"

"May the dead rest in peace and justice will last forever." The article finally said.

The murderer was sentenced to death and deprived of political rights for life.

The victim’s mother’s civil lawsuit was also supported by the court.

The Supreme People’s Procuratorate approved the prosecution and the Nanjing Intermediate People’s Court found that at 22:00 on March 20, 1992, the defendant Ma Jigang found the victim Lin alone on the campus of the former Nanjing Medical College, 140 Hanzhong Road, Nanjing Studying in the classroom, he used an iron rod to force Lin to have sex at the courtyard of the teaching building. In the meantime, because of resistance, he hit Lin on the head many times with an iron rod.

Later, fearing that the crime would be revealed, Ma Jigang dragged Lin to the outside of the teaching building, put Lin head down into the manhole and covered the manhole cover, and then put Lin's schoolbag, books, clothing and other personal belongings into another manhole next to him. Inside.

After committing the crime, Ma Jigang fled the scene when he was interrogated by school guards for suspicious behavior.

On March 24 of the same year, Lin's body was found.

It was identified that Lin was hit on the head with a blunt instrument, causing head injury and drowning, causing mechanical suffocation and death.

According to the Nanjing police, this old case 28 years ago is one of the few vicious cases in Nanjing that has received national attention in recent years.

After the incident, the police task force carried out large-scale investigations and investigations for several consecutive months. More than 15,000 investigators were visited. However, limited by the conditions at the time, the case did not make a breakthrough.

The ability to solve the case benefited from the in-depth application of the latest criminal technology, compared the DNA evidence retained at the crime scene, filed all the more than 120 case files that year, combed and analyzed them one by one, and finally found the murderer who has been working and living in Nanjing for many years.

On September 16 this year, the trial of the case also received great attention.

In the end, the court held that the defendant Ma Jigang deliberately and illegally deprived others of their lives and caused one death; the rape of a woman by violence and coercion had violated the provisions of the 1979 Criminal Law of the People’s Republic of China and constituted the crime of intentional homicide and rape. .