After the "fake Jin Dong" cheating middle-aged and elderly fans were exposed, they have not stopped...

Chinanews client, Beijing, October 15 (Reporter Ren Siyu) Recently, an entertainment news about fans chasing stars has been searched, but netizens have mixed feelings.   According to the Jiangxi Metropolitan Channel "Urban Live" report, a man claimed that his wife lost more than 10 kilograms because of the star "Jin Dong" on the short video platform. He quarreled with him every day and suddenly 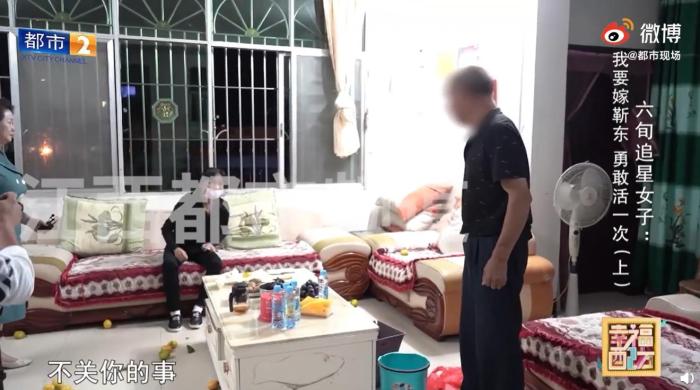 According to the Jiangxi Metropolitan Channel "Urban Live" report, a man claimed that his wife lost more than 10 kilograms because of the star "Jin Dong" on the short video platform. He quarreled with him every day and suddenly ran away from home. Changchun.

In an interview, 61-year-old Ms. Huang said that she has always liked actor Jin Dong. During the epidemic earlier this year, she reached "Jin Dong" through a short video platform and got in touch with the other party.

The other party not only confessed to him, invited him to meet in Changchun, but also said that he would give her 1 million, and even give her a house.

On October 13, Jin Dong's studio issued a statement stating that Jin Dong has never opened an account on any short video platform so far. The account involved is fake and suspected of infringing Jin Dong's right to portrait and name. The studio will go through legal channels. Investigate the legal responsibilities of relevant entities.

At first glance, this was a piece of ridiculous star-chasing news. Topics such as "How crazy are Jin Dong's elderly fans" were once on the hot search, but later it was discovered that the crazy star-chasing Ms. Huang had not only suffered a scam, but was behind it. There are some sad past events.

In the report, this fake account named "Jin Dong" contains a large number of grafted videos. The account operator cuts out the video clips of Jin Dong's acting and interviews with a colorful background and manual or machine dubbing. , Turned into short videos of Jin Dong saying "Dear Sister" and "Sister has worked hard."

However, in the eyes of most people, this "fake" copycat account has convinced Ms. Huang who is over 60 years old.

In the report, Ms. Huang stated that "Jin Dong" announced to the whole of China through a short video that she liked her. There were some secret codes between the two people. "Jin Dong" also knew her online name and responded to her every time.

When "Fake Jin Dong" appeared on the hot search, netizens were surprised to find that Ms. Huang was not alone. There were many sincere and emotional messages under this type of account. Some people talked about the various problems encountered in life. Happiness, saying that they feel warm in the star chasing, and some netizens have shared cases of their parents being cheated because they are obsessed with fake celebrity accounts.

Nowadays, no users can be found by entering the keyword "Jin Dong" on the short video platform, but searching with words such as "Dongdi", "Dongge" and "Zhandong", you will find that such counterfeit accounts still exist. Some middle-aged Ren also released a co-production video with "Jin Dong", and "Jin Dong" in the other half of the screen is saying heart-warming words, or encourage everyone to pay more attention to it.

Further searching will find that "fake Jin Dong" is only a small part of it. Stars such as Zhang Jiayi, Liu Kaiwei, Cai Guoqing, Liu Tao and others have unfortunately "layed guns."

In these various fake videos, Shandong native "Jin Dong" said "hello sister" in various accents, "Ma Yun" said "five minutes to follow me, there will be surprises", "Hawick Lau" warmly invited everyone to live chat. "Liu Tao" starts a voice call from time to time, saying "I want to make friends with you"...

The purpose of these fake accounts, in addition to lighting up red hearts and increasing attention, is to induce fans to buy things.

In media reports, Ms. Huang said that it would cost a lot to watch every live broadcast of the "Jin Dong" account on time.

On the 14th, the reporter randomly clicked into a live broadcast room nicknamed "Your Wife Brother". In the middle of the screen was a photo of actor Hawick Lau. A large segment of machine dubbed sound was playing in a loop. The content was a recommended price. 58 yuan "young brother's lady cream":

"Did my sister eat? My brother did not film today, so I have a day off at home."

"Sister, after buying the lady cream, you can also take a look at the box and mask in the little yellow car. This is a product that the female star of the crew used when I was filming in Hong Kong and said that the effect was very good... Looks... the younger brother is usually filming and can't be with her sister. Let these skin care products protect her."

In the live broadcast room, "Wei brother" claimed to be busy filming, but every day he turned on his phone to check the co-productions and read the messages, but every time he saw some dull skin, he was a little sad, so he carefully prepared a lady cream, because " My sister deserves better."

In the comment area, people send emojis from time to time and say, "Brother said so well."

Nowadays, the high imitation accounts of celebrities appearing on the Internet are no longer unfamiliar, but this news makes netizens feel embarrassed that it is the fakers cheating with such awkward means, and many middle-aged and elderly people are really caught in it.

In the report, Ms. Huang's son recalled that his mother may have had mild depression symptoms last year, and these were accumulated over the years of family chores.

She once pinned her hopes on her son, but she did not get her wish. The younger son also owed more than 1.8 million yuan in foreign debt.

In addition, the youngest son was adopted to his uncle after he was born, and he followed his mother's surname since he was young. But three years ago, his father suddenly wanted to change the youngest grandson's surname, and a lot of disputes occurred between the two.

In addition, Ms. Huang also wanted to borrow money to buy a house to improve the learning environment of her grandchildren. By the way, she was opposed by her husband. The reason was that the two pensioners were unable to repay the debts. Finally, the house was bought, and the barriers became more and more severe. Big.

At the end of the story, Ms. Huang never waited until "Jin Dong" herself appeared, but she still spoke to the camera and said: "Xiaodong, they said you are a liar, I don't believe it, I will continue to wait for you."

Even if you know that it is not true, you are willing to be deceived. Are you familiar with such middle-aged and elderly scams?

Many years ago, many cases of promoting health products were the same. From time to time, scammers greeted the grandparents and gave eggs or medicine every three to five. They took care and caring like children, and finally fooled the other party to buy the product happily.

Today, similar scams have moved from offline to online.

"Fake Jin Dong" are not clever in their deception, but they have captured the "emotional needs" of middle-aged and elderly people who are not paid attention to.

There are all kinds of unsatisfactory and incomprehensibility in life, but the big stars "Jin Dong" or "Liu Tao" can chat with them every day and encourage them to care about themselves. Over time, the celebrity becomes a kind of spiritual sustenance, and the victims voluntarily sink into it. among them.

The Internet has made the world flat. People can see the life and daily life shared by celebrities anytime and anywhere, but it also gives crooks many opportunities.

They took advantage of regulatory loopholes to trick middle-aged and elderly fans who lack discernment skills on the Internet, even after the news broke.

The "fake Jin Dong" incident has aroused widespread concern. Ms. Huang's experience should not be simply regarded as entertainment gossip and laughed at. These scams that cover celebrity accounts for profit are urgently needed to be cleaned up and rectified.

Has anyone around you experienced a similar scam?