The 20-year-old girl is 2 meters tall and talks about the conditions for making a boyfriend: more than 1 meter 7

Girls always want to have a pair of long legs, but some people may be destined to have long legs when they are born. In Chongqing, 20-year-old Liu Xiaoyue is recognized as a "giantess" in the circle of friends. She was more than 1.7 meters tall in elementary school, and now she is astonishing 2 meters tall. Because she is too tall, she encounters a lot of difficulties in daily life. But she didn... 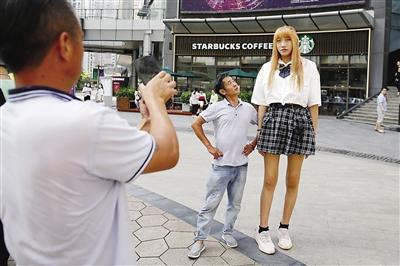 Girls always want to have a pair of long legs, but some people may be destined to have long legs when they are born. In Chongqing, 20-year-old Liu Xiaoyue is recognized as a "giantess" in the circle of friends. She was more than 1.7 meters tall in elementary school, and now she is astonishing 2 meters tall. Because she is too tall, she encounters a lot of difficulties in daily life. But she didn't have a low self-esteem. Instead, she took advantage of her height to make video clips to amuse the netizens, and was called the female version of Yao Ming by fans. She told reporters that she just wanted to be an ordinary person, not being treated as an alternative. When talking about the conditions for making a boyfriend, she jokingly said: "It's very simple, just need to be taller than 1.7 meters."

◀Passers-by are taking photos with Xiao Yue, looking up at her curiously.

Guards the height and leg length over 1 meter 3

Yesterday at noon, Liu Xiaoyue walked into Nanping Wanda Plaza in a school uniform with a drink in her hand. Most of the people around her were only shoulder-high with her. Passers-by looked back from time to time and took out her mobile phone to take pictures of her, accompanied by muttering: "This girl It's so high!" Liu Xiaoyue has long been accustomed to such remarks, let alone caring.

Indeed, Liu Xiaoyue is 2 meters tall, and he feels "outstanding among the crowd". Xiaoyue told reporters that her hometown is in Neijiang, Sichuan. Her father is 1.9 meters tall and her mother is 1.7 meters tall. Affected by this, she has long noticed that she is much taller than her friends. , I’m just over 1.7 meters tall and sit in the last row all year round."

Brother Nie Shifan revealed that the most enviable thing about Xiaoyue is her height, with her legs exceeding 1.3 meters long. It's also because of her height that has brought invisible pressure to her friends since she was a child. The average girl can only reach her waist, and even the boys dare not stand beside her easily. Nie Shifan also said that although she usually goes out very low-key, she always attracts strange eyes from passers-by because she is too "outstanding".

▶Xiao Yue's palm is a circle bigger than passersby

Often asked why not play basketball

When the reporter interviewed Xiao Yue at Wanda Plaza, many passersby were onlookers, and many people asked for a group photo on the spot. "Wow, it's too high, I have never seen such a tall girl" "This is what I eat grows so tall"... passers-by exclaimed one by one, making Xiao Yue a little shy to ask.

Xiao Yue said that passers-by would always ask her weird questions these years, and the three most frequently asked were "How tall are you?" "Why don't you play basketball?" "What should I do if I find a boyfriend?" After hearing this, she smiled and said nothing, it seemed to her that it was difficult to explain clearly in a few words. However, when passers-by asked for a group photo, Xiao Yue's answer was almost always met, but small embarrassment often occurred. I remember that when I took a group photo, it was probably because the camera angle of the other party's phone was wrong. The photo Xiao Yue was "beheaded" in the photo made her look like a question mark.

My girlfriend Xixi told reporters that her friends rarely took photos with Xiao Yue because she was afraid of embarrassment because of her height difference. At the same time, she bluntly said that with a big guy like Xiao Yue by her side, she feels full of security every time she goes to the street. She can easily get things that she can't get on the shelves when she goes shopping in the supermarket, which is more effective than boys.

▲ A passerby of 1.55 meters stands beside Xiao Yue like a child

There are also many problems with height and long legs, such as bending over to pick up things,

It’s what Xiao Yue fears the most. “Most people bend over and pick it up. I can’t. I have to squat down, then reach out to pick it up, and then stand up again.” In addition, dressing is also troublesome. Common pants look like 7 to her. For pants, you have to buy shoes in size 46. Offline physical stores can hardly meet her needs. Most of them are purchased online, with the largest size clothing and shoes noted.

My friend Xiaoping told reporters that because of her height, whether she is at home or going out, the ceiling is the biggest "enemy" and will knock on the door frame if she is not careful. Bend down all the way on the subway, take the bus even as high as the car, and take the taxi, you can only curl up.

Boyfriend only needs to be taller than 1 meter 7

Now, 20-year-old Liu Xiaoyue always attracts a ray of gaze wherever she goes, "I was uncomfortable at first, and gradually became accustomed to it." However, it is really hard work for her to stay in a hotel like going out. , Because of the tall bed and the small size, I had to temporarily move a few chairs to make an extended version.

For the other half of the relationship, Liu Xiaoyue said that he has not considered it yet. She also said frankly that being too tall makes it difficult to find a boyfriend. The average boy is like a child in front of her. "If the day comes when I need to find a boyfriend, I only have one condition. The height is more than 1.7 meters. ."

I just hope everyone treats me like an ordinary person

Liu Xiaoyue told reporters that when she was in middle school, she had doubts about her height. After she stepped out of society, she discovered that many people outside the campus worshipped her height, and her self-confidence slowly recovered. She also took advantage of her height to shoot funny jokes and post them on the short video platform. She has more than 100,000 fans on Douyin and Kuaishou, and she is very popular.

The older brother Nie Shifan is 1.6 meters tall. He often partnered with Xiao Yue in short videos and played the role of "the cutest height difference" partner, attracting crazy likes and comments from netizens. Fans cordially call Xiao Yue the "female version of Yao Ming". In this regard, Xiao Yue said that basketball was too intense, and he didn't like it since he was a child, so he didn't embark on the road of basketball. He was a little flattered to be compared to Yao Ming. "I don't want to be put too high, because that would be very tiring, and I don't want everyone to treat me differently. I just hope that everyone treats me as an ordinary person, just a taller ordinary person." Xiao Yue said.